The aggregate annual revenues of the nine main criminal markets in the EU ranged from €92 to €188 billion in 2019, according to research that examined the scale, actors, modus operandi and trends in these markets.

Organised crime groups in the EU are becoming increasingly cross-border and transnational in their operation, with more than 5,000 groups under investigation in 2017 according to official Europol statistics. As the criminal proceeds generated from the trafficking of illegal goods and services are laundered through legitimate businesses, these criminal groups present a risk to both the EU economy and its society.

Addressing the infiltration of the legitimate economy by serious and organised crime (SOC) is one of the EU’s top priorities. Appropriate targeting of resources to tackle SOC relies upon accurate information about the extent and nature of the phenomenon.

The Directorate-General Home Affairs at the European Commission commissioned RAND Europe (and partners) to provide an up-to-date picture of the dynamics of serious and organised crime in the EU.

This study utilised a mixed-methods approach utilising a range of quantitative and qualitative data.

Investment by OCGs in the legal economy

The freezing and confiscation of assets from SOC

The exploitation of the underground economy for SOC

The use of new and non-banking payment methods for SOC 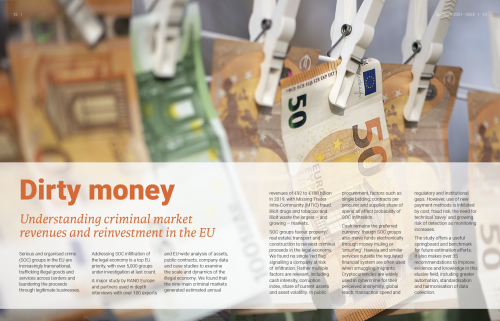