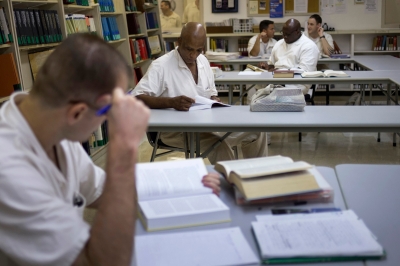 In the past 40 years, the U.S. incarceration rate has more than quadrupled. From 1980 to 2010, incarceration rates for drug offenses increased tenfold. These trends, along with high levels of recidivism, have shined a spotlight on corrections reform.

Now, state and federal policymakers are considering a range of strategies for reducing mass incarceration, and such changes include correctional education initiatives. RAND research shows that correctional education can help reduce recidivism and improve post-release employment outcomes, saving taxpayers money. This research is at the forefront of helping to inform the debate and guide policymakers' efforts.

RAND's impact has been demonstrated at a federal level by the debate over Pell Grant eligibility for prisoners.

"[A] recent report by the RAND Corporation … found that for every $1 investment in prison education programs there is a $4-5 dollar reduction in incarceration costs during the first three years post-release of a prisoner."

"The Second Chance Pell proposal expands opportunity to incarcerated individuals eligible for release with the goals of helping them get jobs and strengthen their communities."

In November 2016, U.S. Secretary of Education John B. King Jr. commented on the recent results of the U.S. PIACC survey of Incarcerated Adults that found that their literacy and numeracy skills were far weaker than those of average U.S. adults. He called for more high-quality education programs within correctional facilities, citing RAND's research findings that showed for every dollar spent on correctional education, four to five dollars may be saved on three-year reincarceration costs.

"Studies have shown that inmates who participate in correctional education programs have significantly lower odds of returning to prison than those who do not, and that every dollar spent on prison education saves four to five dollars on the cost of reincarceration."

"The recent RAND report … is part of the impetus behind the provisions in SB 1391. The reliance on Community Colleges in SB 1391 is strengthened by the findings in the report as well."

British magazine Prospect named RAND as a Runner Up for US Social Policy in the Think Tank of the Year Awards in 2015 for its work on prisoner rehabilitation and the role of education for inmates.