Mapping the Legacy of Historic Redlining on Urban Environments 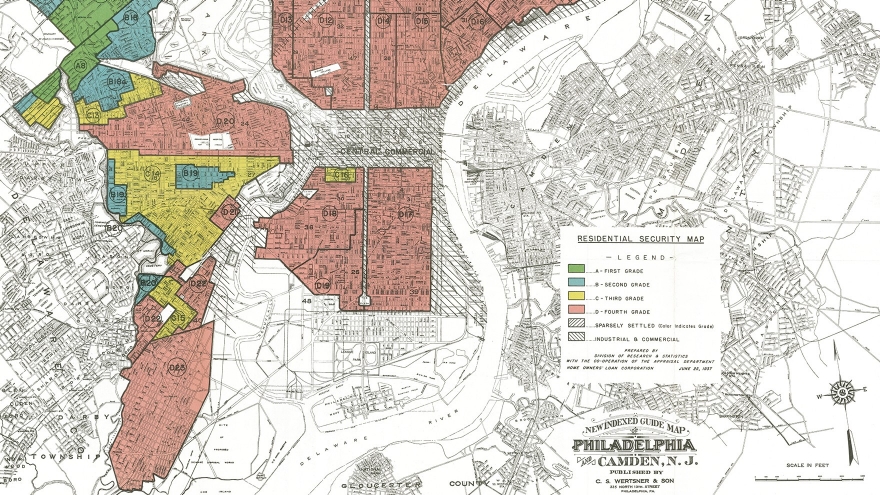 Our neighborhoods have a significant impact on our health and well-being. Environmental measures such as air quality, heat, traffic levels, and how much greenery we enjoy, all contribute to our quality of life. And these factors vary widely between communities, with some bearing a far greater environmental burden than others. In the United States, communities of color and low-income communities are more likely to include hazardous waste facilities, have poorer air quality, and be affected by climate change impacts.

These disparities are not accidental. Historical policies such as redlining have had an enduring impact on urban environments. This practice began in the 1930s, when the Home Owners’ Loan Corporation (HOLC) graded neighborhoods based on their perceived risk for home loan lending. Those designated as most risky, outlined in red on maps, were often inner-city areas with majority Black and immigrant populations. Redlined neighborhoods offered less opportunity to accumulate wealth through home ownership, and received less public investment.

This RAND study created an interactive tool that combines historical HOLC boundaries with data on present-day environmental measures such as air pollution, traffic, and tree coverage in more than 200 U.S. cities.

Philadelphia, Pennsylvania: A Pattern in Trees 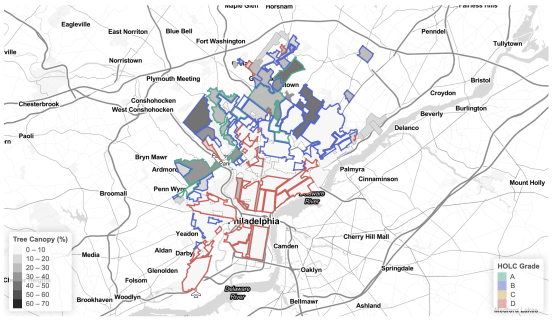 Trees provide many benefits for neighborhoods, including reducing air pollution, helping to improve the mental health of residents, promoting physical activity, and providing shade and cooling.

In Philadelphia, a stark pattern can be seen between neighborhoods that were historically graded green or blue (“A” or “B” in HOLC grades), with those that were redlined. In the northwest, the leafy neighborhoods of Chestnut Hill and Mt Airy, which were designated with green “A” grades, have among the highest percentages of canopy coverage in the city. By contrast, many neighborhoods in South Philadelphia—all redlined—have some of the lowest canopy coverage. Not surprisingly, areas with more trees in northwest Philadelphia consistently have much lower summer temperatures than the neighborhoods lacking trees. 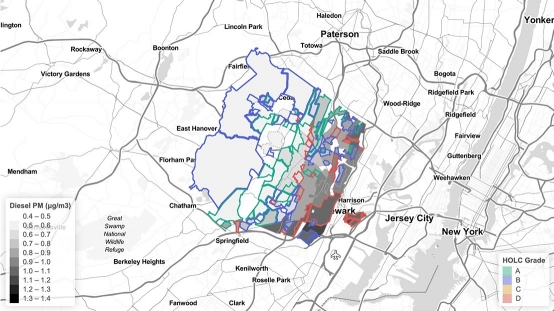 In Newark, New Jersey, a formerly redlined city, the impact of past planning decisions is felt in air pollution—particularly diesel particulate matter from freight—and hazardous waste sites. Trucks, ports, railroad operations and toxic sites are a greater burden on communities of color and lower-income neighborhoods in Newark than green- and bluelined surrounding suburban towns. A law passed in 2020 requires the New Jersey Department of Environmental Protection to consider the high levels of contamination that already exist in some communities when considering certain types of permits. 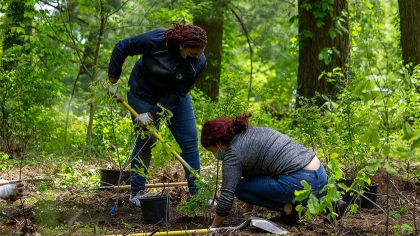 In some communities efforts are underway to address inequities of the past. In Philadelphia, the city is working on a 10-year tree plan to guide planting and care of its urban forest, with environmental justice as one of the core values shaping the plan.

In Chicago, where the tree coverage pattern is also aligned with historic redlining, the city recently announced a major investment in tree equity. The strategy will prioritize planting in historically marginalized communities, to help address decades of disinvestment. The city is working with community groups and non-profits to identify locations for planting.

This project aimed to illustrate how discriminatory practices in past urban planning and housing policies have contributed to the environmental inequities in cities today. Focusing on redlining, the RAND research team combined data on environmental hazards and amenities, including air pollution, traffic volume, flooding risk, ambient temperature, and tree canopy cover, and examined how those patterns aligned with historic “residential security” grades established by the HOLC.

The team also conducted a review of literature and policy documents and interviewed community groups who are working to advance environmental justice about efforts to redress inequities, and what successful initiatives have in common. These conversations pointed to the importance of genuine community engagement – from start to finish – when addressing environmental injustice.