PHRESH is composed of several separate research studies sponsored by the National Institutes of Health (NIH). We are committed to sharing the results with participants, local stakeholders, and communities nationwide. Below are highlights from our findings to date. See our publications page for more details on the results.

In 2021 we are in the field collecting surveys from Hill District and Homewood participants around neighborhood perceptions, including access to services, neighborhood satisfaction, social cohesion, neighborhood safety, relatability to police, perceptions of police bias, and neighborhood aesthetics. We are also collecting data on perception of air quality, perceptions of food availability and purchasing/shopping behaviors, food security, physical health, psychological functioning and behavioral health, stressful life experiences, perceived stress, hopelessness, resilience, home environment, and demographics. Data collection will continue through the end of 2021, and results will be published in 2022.

While the Hill District is preparing for a new store to open in the former Shop N Save location, we have compiled information that shows where Hill District PHRESH participants have been shopping over time. This includes some 2021 data collection through October 11, 2021.

Where do Hill District residents shop?

Between March and May of 2020, we conducted 605 phone interviews with residents of the Hill District and Homewood. We used data that we had collected beginning in 2011 among the same participants to examine trends in food insecurity over time and the impact of the COVID-19 pandemic on food insecurity. We compared the trends with national trends and found that our sample had a greater increase in food insecurity resulting from the COVID-19 pandemic. In the early days of the pandemic, we did not observe changes in Supplemental Nutrition Assistance Program (SNAP) or food bank use. The existing safety nets may have failed to reach those with emerging needs particularly in the early days of the pandemic. However, difficulties enrolling in SNAP, problems accessing food banks during shutdowns, or feelings of stigma or uncertainty regarding eligibility may also be to blame. Other factors contributing to the food insecurity spike may be loss of work, increased psychological distress, and concerns about leaving one’s home for food shopping. We continue to analyze other findings from this survey, including psychological health and economic outcomes.

In 2018, we continued to collect data related to all of our major PHRESH aims from 2016, which included diet, physical activity, sleep, and heart health. In addition, we have been funded to continue examining more closely the effects of diet within the neighborhood (rePHRESH).

Papers involving data from this data collection are being released so please see our publications page for more information on new releases.

A summary of findings is also available in our community newsletter.

Since 2013, we have been funded to extend our analysis to include other important health indicators and a broader focus on other changes that are occurring in the neighborhood. We are building on the PHRESH study by examining residents’ heart health, physical activity, sleep, and use of neighborhood green spaces and public areas—in addition to food choices, neighborhood perceptions, and overall health and well-being.

In 2016, we collected data to assess the longer-term effects of neighborhood changes. In this phase of the study, we focused on diet, physical activity, sleep, and heart health, among other measures of health and well-being.

Additional analysis was done on the opening of the supermarket in the Hill District. The introduction of a supermarket did not result in higher healthy food availability per se. However, we concluded that opening new supermarkets may improve residents’ health, well-being, and their satisfaction their neighborhood as a place to live.

Certain neighborhood characteristics, such as cohesion and lower poverty, may lead to better sleep. Neighborhood disadvantage could be associated with disrupted or shorter sleep.

Residents’ perceived safety and physical activity could also be important aspects in the connection between crime and BMI. Also their social networks and social support can play a role in improvement of physical activity and BMI.

In 2014, we repeated the 2011 data collection after a new grocery store was built in the Hill District.

Compared with Homewood residents, Hill District residents had somewhat healthier diets in 2014. They consumed fewer calories, less added sugar, and fewer "empty calories." However, there was no statistically significant change in other dietary outcomes, such as consumption of fruits, vegetables, and whole grain foods.

Perceptions of access to healthy foods improved significantly for Hill District residents, as did overall satisfaction with the neighborhood. After the arrival of the full-service grocery store, 80% of Hill District respondents said they were satisfied or very satisfied with their neighborhood (compared with 66% in 2011).

* This table only indicates a decrease or improvement that was shown to be statistically significant at the p < 0.05 level.

No Clear Connection Between Improvements and the Grocery Store's Opening

We could not link the gains in the Hill District to the store's opening, but we might see more definitive outcomes as the study progresses.

Exercising regularly can help bring many positive changes to people's health. There is evidence of a relationship between a neighborhood's green space environment and residents' participation in exercise. PHRESH Plus, a five year study connected with PHRESH, shares PHRESH's mission of understanding neighborhood health and well-being, with special attention to the exercise and physical activity choices of residents in the Hill District and Homewood.

The first publication from PHRESH Plus, Are Food Deserts Also Play Deserts?, found that:

In addition to the data reported below, we asked residents about their dietary intake and perceived access to healthy food. We also recorded participants' height and weight to calculate their body mass index (BMI). 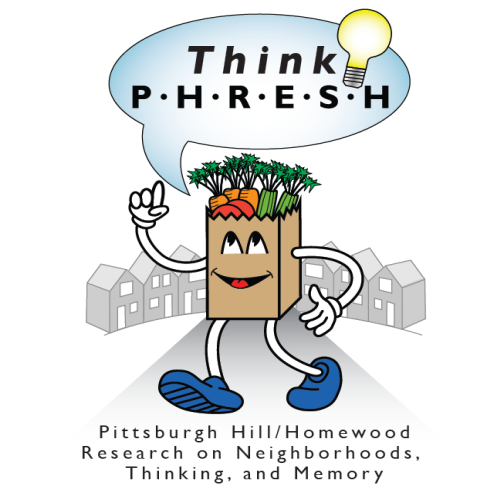