Remote sensing data are of particular value for the study of ISIL and other similar nonstate violent actors because their presence does not affect the ability to gather such data safely. Additionally, unlike other data that require on-the-ground collection, ISIL’s brutal influence over the local population will not bias our ability to gain objective insights into local conditions. Data are collected free from potential intimidation of survey respondents or interview subjects. As a result, remote sensing and satellite imagery data have become increasingly popular in both media reporting and empirical research. 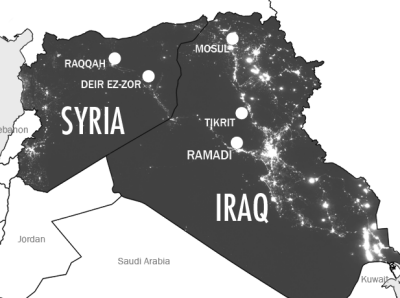 Researchers used two different types of remote sensing data in their analysis of ISIL and the local economies of Iraq and Syria, presented in the below table. The first type of remote sensing data comes from publicly available satellite data, which are typically collected and made available by U.S. government agencies, such as the National Oceanic and Atmospheric Administration (NOAA) or NASA. These data have the advantage of being well studied in technical literature and systematically available across all parts of Iraq and Syria at regular time intervals. They are often collected at low or moderate resolution. Researchers used these data to estimate four different indicators of economic activity: industrial activity, agricultural activity, population levels, and electrification.

The second type of remote sensing data used in this study is commercially available satellite imagery. Commercially available imagery typically provide much more granular insights into an area than publicly available remote sensing data do. Although they offer much greater precision and level of detail, commercial imagery is captured at infrequent intervals over time, with fewer images available in remote locations of the world, and can require greater processing power and time to analyze given the amount of information captured in each image. Researchers use these data to estimate three different indicators: market activity, building damage, and commercial vehicle counts. We primarily utilize DigitalGlobe's online crowd-sourcing platform, Tomnod, which helps analyze this imagery via an online crowd of volunteers.

Researchers measured electricity consumption with data on nighttime lighting, made available by NOAA. These data capture the intensity of light at night for roughly every square kilometer of the earth's surface. Although the data are captured daily, NOAA cleans and publishes nighttime lighting data in annual averages for 1992 to 2013 and in monthly averages for each month since 2014.

These data have become prevalent in recent literature as a proxy to measure changes in local economic activity, as well as country-level gross domestic product (GDP) at higher levels of aggregation. Researchers focused specifically on nighttime lighting as an equilibrium measure of electrification in that it captures both the supply of power resources and demand for electricity. Nighttime lighting should fall as a result of reductions in demand as people and economic activity migrate away from a city under siege. It should also fall as a result of reductions in supply as access to major power generation facilities is restricted in the midst of conflict or ISIL is unable to provide sufficient energy resources or technical capacity to run existing power plants or private generators.

The below video collects images of monthy average nighttime lighting intensity in Mosul into a two-year series.

Researchers used Oak Ridge National Laboratory (ORNL) LandScan data set to measure internal migration. LandScan is a 1 km resolution data set that provides integer population counts for each grid square in the world. These population counts are derived using a proprietary modeling approach developed by the national lab, which integrates known census data for administrative districts with visible changes in infrastructure and population movements measured using satellite imagery. ORNL publishes these data annually in raster image format, and they are available to analysts supporting government-sponsored research. Although similar data sets are available publicly, including the Gridded Population of the World data from NASA's Socioeconomic Data and Applications Center, other such data sources often divide district-level population totals evenly across administrative areas and rely on forecasts of population levels where no new census data exist. LandScan's advantage lies in its ability to more precisely disaggregate district-level population totals across urban and rural areas based on the built-up infrastructure of these locations. Additionally, LandScan can capture temporal variation in population density objectively and frequently, where traditional population data sources, such as censuses, are more infrequently collected.

To track internal migration, researchers leveraged periodic data sets produced by ORNL showing population levels across Iraq and Syria in February 2015, May 2015, November 2015, March 2016, and July 2016, along with 2008 population data (to determine a baseline for pre-ISIL population levels). Although this offers a much finer-grained understanding of internal migration within Iraq and Syria than provided by other data sources, it does necessarily limit our ability to understand pre- and post-ISIL population movements in some cities because of missing data for 2013 and 2014.

Of note is the fact that internal migration is an imperfect measure of economic activity. On the margins, changes in citywide populations will tell us little about changes in overall supply or demand for commercial goods or changes in the availability of labor as an industrial input. However, evidence of major population outflows could help us to disentangle the effects of ISIL governance, to the extent that it acts as a stabilizing influence in the midst of larger conflict or to the extent that its brutality leads to massive population flight. It also serves as an indicator of the impact that violence has on areas affected by the Islamic State, to the extent that the timing of IDP flows is correlated with ISIL takeover versus liberation from ISIL.

Researchers used the USGS's Landsat 8 satellite and its measures of red and near-infrared (NIR) light intensity as a proxy for overall changes in agricultural activity. All Landsat images are captured at approximately 10:15 a.m. local time once every 16 days for the entirety of the earth's surface at a spatial resolution of 30 meters by 30 meters, and they are made publicly available through the USGS's EarthExplorer website. Landsat data on surface reflectance in the red and NIR bands is used to calculate vegetative intensity using a metric known as the Normalized Difference Vegetation Index, or NDVI. NDVI allows researchers to differentiate vegetated areas from other land cover types. Estimates of the spatial intensity of vegetated areas using this method are especially well-suited proxies for agricultural activity in the arid climates of much of Iraq and Syria, where vegetation outside of irrigated areas is generally limited. The below image plots a raster image of the NDVI values surrounding Raqqah in March 2014, at roughly peak harvest season for the local wheat crop. Green areas indicate significant amounts of vegetation, while dark blue areas highlight desert areas, built-up urban centers, and bodies of water (in this case, the Euphrates River).

The first indicator of economic activity derived from commercially available satellite imagery is market activity. Open-air markets figure prominently in the economic and social landscape of cities throughout Iraq and Syria. Researchers used high-resolution imagery to understand whether ISIL control has influenced overall economic activity in and around these markets.

To develop this indicator, researchers first identified market locations in our five key cities of interest based on publicly available data. This included published maps of cities in the region, along with publicly available information from Google Maps and OpenStreetMap (OSM), as well as manual analysis of satellite imagery data to identify market locations throughout each of our five case study cities. This resulted in a data set of 73 specific market locations in our five cities of interest, ranging from only ten in Tikrit to nearly 20 each in Mosul and Raqqah.

Second, the research team used a crowd-sourcing approach to measure activity at each location over time. Through its online crowd-sourcing platform, Tomnod, DigitalGlobe created a campaign of more than 100 volunteers who examined each image and rated the level of activity on a scale from "no activity" to "limited activity" and "significant activity." Each image loaded into the campaign received a series of ratings from across the crowd until a sufficient consensus emerged. The result of this analysis was a data set of market locations and crowd-sourced levels of market activity at each location over time. People in the crowd were given images of markets at random time periods in nonsequential order and with random assignment to specific locations across all five cities of interest in our analysis. We rely on these average crowd-sourced rankings to understand both temporal and spatial variation in the intensity of market activity across each city.

Measuring market activity is not a simple task. The below figure represents an image from January 2016 of the central market in Mosul that demonstrates the challenge faced by our volunteer crowd. In the first area noted in the image, an open-air market has formed in a paved portion of the central market area. In this location, car counts or manual counts of market stalls could act as a sufficient proxy for the level of activity over time. The second area noted in the image is a covered adjacent portion of the market. It is difficult to gauge with the naked eye the level of activity at this location, and, although infrared or nighttime lighting over this location could reveal some insight into its level of activity, the small size of this location could prove prohibitive for tracking activity of this market as distinct from its surrounding areas. In the third area of the market, a relatively traditional street market forms off the main square. At this location, car counts or counts of market stalls would prove insufficient measures of activity because the small size of the street constrains vehicle traffic.

This comparison suggests that the human eye is arguably best able to gauge differences in activity across these locations based on not one but a combination of factors, potentially including cars, market stalls, or foot traffic that might be too subjective for more-advanced algorithms to assess without human-assisted machine learning techniques. Instead of relying on a single user to code market activity, we average inputs from more than 100 users to obtain a more reliable measure. This is the benefit of crowd-sourced analysis of imagery.

A crowd-sourcing approach was also used to identify buildings, roads, and infrastructure in each of the five cities of interest that are damaged from fighting, shelling, or even air strikes. DigitalGlobe loaded full images covering the spatial extent of each city into the Tomnod crowd-sourcing platform and asked volunteers to identify any areas with visible signs of damage. Rather than preload locations for the crowd to analyze, users could manually scroll through imagery of entire cities at once and tag areas with damage. Areas with repeated tags across multiple users were then output as a set of spatial points for statistical analysis.

The resulting data set allows us to measure the spatial incidence of damage and destruction throughout each city over time. We use changes in damage over time to better understand the extent to which fighting affected key economic or residential infrastructure, as well as the extent to which ISIL reconstructed damaged parts of cities, and to assess the extent of post-liberation destruction in a city.

The below image is an example of crowd-sourced points of damage within Deir ez-Zor, Syria, as of November 2014.