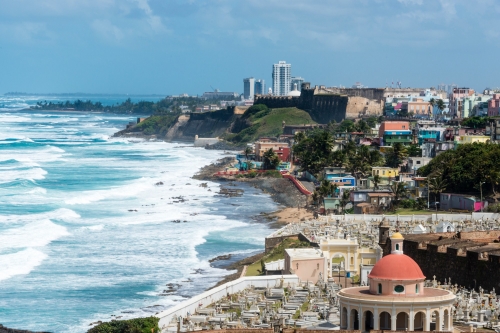 Situated between the Atlantic Ocean and the Caribbean Sea, approximately 1,100 miles east-southeast of Miami, Florida, the archipelago of Puerto Rico consists of a main island; two populated islands off its east coast, Culebra and Vieques; and several smaller, uninhabited islands. Much of the interior of the main island is mountainous, characterized by steep slopes and narrow valleys and is relatively sparsely populated. The coasts, which boast popular beaches and tourist attractions, are home to Puerto Rico’s larger cities, including the capital of San Juan.

Following the Spanish–American War, Puerto Rico became an territory of the United States, and since passage of the Jones-Shafroth Act in 1917, anyone born in Puerto Rico is a U.S. citizen with freedom of movement to travel back and forth to the mainland. In 1950, Puerto Rico was granted the right to organize a government with the passage of the Puerto Rican Federal Relations Act. Two years later, the territory adopted a constitution (Constitución del Estado Libre Asociado de Puerto Rico, 1952), at which time it also became a U.S. commonwealth.

In September 2017, Puerto Rico was struck by two major hurricanes in quick succession.

Rico as a category 4 hurricane with peak wind speeds of up to 155 miles per hour, and was the most intense hurricane to make landfall in Puerto Rico since 1928. So close on the heels of Irma, Maria represented a near worst-case scenario for Puerto Rico. The storm’s path moved directly across the main island, with the eye passing only 25 miles from the capital of San Juan. Hurricane-force winds combined with Puerto Rico’s mountainous terrain led to wind tunnels, increased rainfall, and flash flooding. Many parts of Puerto Rico received at least 15 inches of rain in a 48-hour period. A second major disaster declaration was issued on September 20, 2017 (DR-4339), and FEMA extended eligibility for both Public Assistance and IA to all 78 of Puerto Rico’s municipalities.

The effects of the 2017 hurricane season were widespread and catastrophic. Damage to critical infrastructure resulted in cascading failures of the lifeline systems of energy, transportation, communications, water supply, and wastewater treatment and impeded response operations. With these events occurring at the end of a very active hurricane season, federal resources for disaster response were stretched, and aid from other states was hampered by a lack of mutual aid compacts and geographical distance. At the same time, Puerto Rico’s municipal governments, which are typically the first responders during an emergency, were unprepared for a disaster of this magnitude. Almost half of the municipalities’ emergency-response plans did not address how to protect children, seniors, and people with disabilities.

In the aftermath of the storms, some residents lacked electricity, fresh food, and clean water for a prolonged period, and, with roads impassable, many had limited access to medical care. And the effects persisted in the days, weeks, and months that followed: government services and private enterprise could not operate effectively, schools were closed, landslide zones faced flooding hazards, and wastewater polluted marine environments. Older adults, children, people with disabilities or chronic illnesses, rural residents, and women all faced challenges to recovery.

Puerto Rico is exposed to tropical cyclones throughout the Atlantic hurricane season. In fact, hurricane is one of the few words that survives from the original inhabitants of Puerto Rico, the Taíno. Nevertheless, the one-two punch of Hurricanes Irma and Maria, combined with the economic challenges and other stressors that Puerto Rico was facing prior to these storms, led to an extended disaster response period. In some cases, response activities were ongoing even as recovery plans were being developed. Puerto Rico’s economic and disaster-recovery plan [PDF], which was submitted to Congress on August 8, 2018, attempts to grapple with these diverse challenges and position Puerto Rico for success in the future.