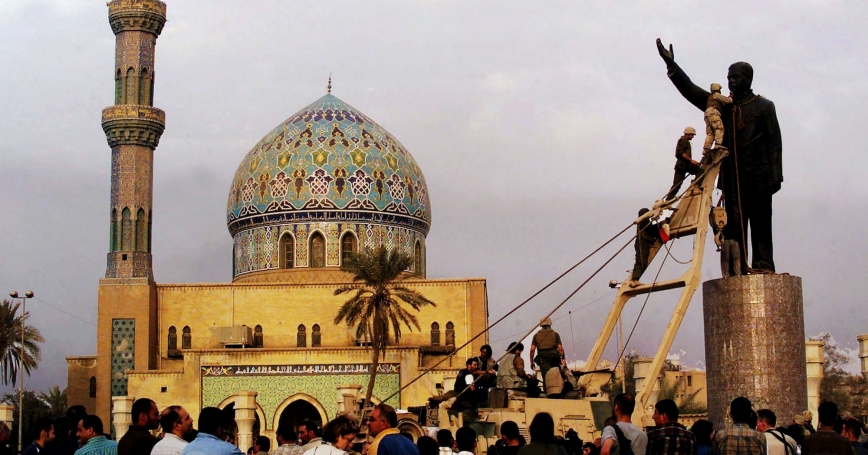 U.S. marines climb up to topple a statue of Iraqi dictator Saddam Hussein at al-Fardous Square in Baghdad, Iraq, April 9, 2003

A few months ago a former British soldier made headlines for trying to sell part of the backside of the Saddam Hussein statue that was famously toppled in 2003. Though Saddam was long gone, the Iraqi government, happy to be rid of him, requested the return of the "artifact." Their interest in repatriating a symbol of their "dictator in hindsight" illustrates the unforeseeable significance of cultural property in foreign relations.

The example suggests that the U.S. might consider proactive protection of cultural property in regions of conflict as an underutilized opportunity for political diplomacy, if not outright negotiation.

The 1954 Hague Convention on Protection of Cultural Property in the Event of Armed Conflict and the first (1954) and second (1999) protocols established responsibilities for military intervention. While not a party to the convention, the United States attempted to avoid collateral damage to Iraq's cultural property during strategic bombing in 2003.

Unfortunately, those measures were less successful during the ground invasion. The U.S. military inadvertently damaged ancient Babylonian ruins and did not secure Iraq's National Museum in Baghdad in time to prevent looting. Both incidents, plus looting of archaeological sites across the nation, resulted in bad press for the United States and bad feelings among Iraqis.

Cases for repatriation and restitution of cultural property are not new and with time accrue political clout. Although some cases are 50 to 200 years old, they remain significant today. These include Greece's persistent demands for repatriation of the Parthenon Marbles over the last two centuries. Since 2009, the New Acropolis Museum awaits their return from the British Museum. In autumn 2010, Peru succeeded in a century-old debate with the Peabody Museum at Yale to gain return of Inca artifacts that Hiram Bingham III removed from Machu Picchu in the 1910s.

Artworks plundered by Adolf Hitler, Hermann Goering and other Nazi officials have appreciated in value over time, perhaps as a result of the debate over their ownership. For example, five paintings by Austrian artist Gustav Klimt that originally belonged to Ferdinand Bloch-Bauer were lost to him when he fled Austria post-1938. In 2000, Bloch-Bauer's niece, Maria Altmann of Los Angeles, filed a lawsuit for the restitution of the paintings from Austria. She succeeded, and subsequently they sold for hundreds of millions of dollars. One painting alone reportedly set a then-record price for an individual work at $135 million.

The political turbulence in Egypt, Libya and Bahrain has seen both looting of artifacts and destruction of monuments. Last year, citizens linked arms in front of the Egyptian Museum in Cairo with some success.

This and other instances like it suggest potential for proactive protection of cultural artifacts, particularly in light of the U.S. ratification of the 1954 Hague Convention in 2009. Indeed, U.S. foreign policy can parlay risk to cultural property into diplomacy by insisting that military interventions, even when the U.S. is not engaged militarily, include a strategy for securing museums, monuments and sites of archaeological significance that along with tactical bombing avoids collateral damage.

America might also assess objects that are likely targets for repatriation and consider offering their return as part of a strategy for relations with the nation of origin. If engaged in conflict — or even if not — an active interest in protecting the local cultural property would serve the purposes of garnering political goodwill and creating an opportunity for communication with the local government and potentially the insurgency.

Proactive repatriation may have merit as evidenced by the success of Italy and Greece in securing antiquities from the Getty Villa in Los Angeles and the Metropolitan Museum of Art in New York. Those contentious, and presumably costly, court cases could have been avoided.

As for regions in conflict, the Taliban and the Northern Alliance in Afghanistan engaged UNESCO to establish a secure location for Afghan cultural property in the late 1990s. From 2000 through 2006, official and private visitors from Afghanistan brought artifacts to the Afghanistan Museum-in-Exile in Budendorf, Switzerland, for safekeeping. In September 2006, after receiving a request from the Afghan Ministry of Information and Culture, UNESCO agreed to repatriate the objects to the National Museum of Afghanistan in Kabul.

America need not wait for the benefit of hindsight to determine its cultural stance. Proactive protection and repatriation of artworks and artifacts can demonstrate our respect for another nation's heritage when the chaos of conflict obscures the value of cultural identity.

Erik Nemeth, formerly with the Getty Research Institute in Los Angeles, is a trustee of the Association for Research into Crimes against Art and an adjunct international security policy analyst at the RAND Corp.

This commentary originally appeared in Chicago Tribune on June 7, 2012. Commentary gives RAND researchers a platform to convey insights based on their professional expertise and often on their peer-reviewed research and analysis.