The Downside of Drones 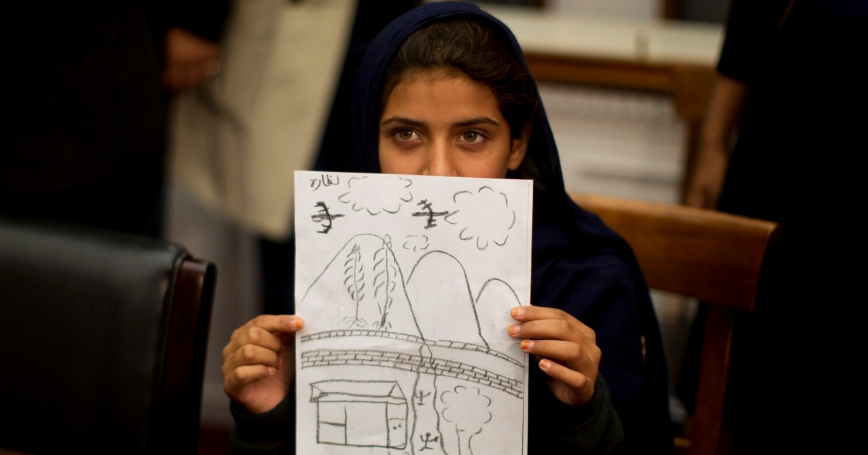 Pakistani girl holds up a picture she drew depicting the U.S. drone strike on her village which killed her grandmother

Drones are losing some of their luster as the silver bullet for attacking terrorist threats. Armed unmanned aerial vehicles clearly will have a role to play in our counterterrorist policy, but their disadvantages compared to other tactics are coming into focus thanks to a healthy debate. While drones offer the advantage of minimizing risk to U.S. servicemen who might otherwise be put on the ground in a combat role, that must be weighed against some significant drawbacks.

The drone attack by definition is aimed at killing rather than capturing the target and it has been deployed in this role with regularity in recent years. Now, though, the administration has signaled that the era of the drone as America's go-to special ops weapon is coming to a close.

The chief legal drawback to drone use is not international law, per se, but rather the threat of copycats that the U.S. government will have little practical or moral grounds for opposing. The chief political drawback is that target countries' populations, if not their governments, view drone attacks as violations of their sovereignty every bit as much as manned raids. The chief military drawback has perhaps received the least attention of all: A drone attack destroys the critical intelligence that is needed to ensure that the tactical strike can be converted to strategic advantage.

Unlike a manned raid, the drone has no ability to conduct sensitive site exploitation, to vacuum up clues, pocket litter and seize laptops and cell phones that are all vital to the high-tech tracking of terrorist and enemy networks. Numerous slogans and catch-phrases have been coined by the U.S. military over the past decade, and one of the earliest insights that special operators seized on, and built their entire approach around, was “intelligence drives ops.”

Jerry Boykin, a now retired Delta Force general, and his protégé Major General Mike Nagata, among many other operators, became enthusiastic proponents of increasing intelligence personnel, analytical capability and technologies in support of their formations — both in the rear and forward. The position of undersecretary of defense for intelligence was created soon after 9/11 to oversee this fusion of intelligence and operations. And every U.S. special ops task force around the world today routinely sets up a “fusion cell” to meld their own, conventional and partner intelligence with that of U.S. and resident intelligence service feeds.

The criticality of intelligence to successful special operations cannot be overstated; conversely, failed counterterrorism missions almost invariably trace to inadequate or faulty intelligence. Former Gen. Stanley McChrystal recounts in his book, “My Share of the Task,” how he and Major General Scott Miller nabbed al-Qaida's top leader in Iraq, Abu Musab al-Zarqawi, in a fatal raid thanks to a human intelligence source who was patiently (and humanely) exploited. More recently, an Al Shabab leader detained in Somalia provided intelligence that was vital to understanding the complex factional infighting that has helped degrade that organization.

Obtaining accurate intelligence is the holy grail of the counterterrorism mission because it is extremely hard to discover the identity and pinpoint the location of terrorists, single adversaries or networks embedded in a population. Once located, capturing or killing them is relatively easy. Thus, special operators focus on “find,” as the subsequent “fix and finish” are made much easier by better intelligence.

While drones can loiter and spot terrorists in advance of the kinetic “finish,” special operators who conduct a raid can both seize the terrorist suspect and exploit the site. Yes, they incur risk to their unit, but that is what they volunteer to do. America's highly skilled operators should never be employed without due assessment and a determination that vital national interests are at stake, but if the United States is going to launch an attack by drone or raid, it would be far better to ensure that maximum advantage is reaped from this act of war. Simply minimizing risk to U.S. lives is not a sufficient calculus.

Drones are also not nearly as foolproof a tactic as sometimes portrayed. Adversaries have become increasingly sophisticated in learning how to outmaneuver drones. Al-Qaida in the Islamic Maghreb and al-Qaida in the Arabian Peninsula have both disseminated detailed instructions to extremist fighters on evasion, cover and communications techniques. In Afghanistan, for many years now, both al-Qaida and Taliban fighters take women and children with them wherever they go, knowing that the strict rules the United States employs to minimize civilian casualties will keep them safe. This last tactic is a problem for raids as well.

Finally, the drone debate has focused far too much on tactical pros and cons and too little on the endgame that the tools are supposed to serve. A successful raid will net human and material intelligence that can flesh out the picture of the enemy network, and thus enable development of a comprehensive strategy that will bring a lasting conclusion to the battle. The drone may find its target but it will not produce the intelligence needed to prevent his successor from stepping into the role days, or even hours, later.

Linda Robinson is a senior policy analyst at the nonprofit, nonpartisan RAND Corporation and the author of the newly released “One Hundred Victories: Special Ops and the Future of American Warfare.”

This commentary originally appeared on U.S. News & World Report on October 31, 2013. Commentary gives RAND researchers a platform to convey insights based on their professional expertise and often on their peer-reviewed research and analysis.