The Partition of Ukraine 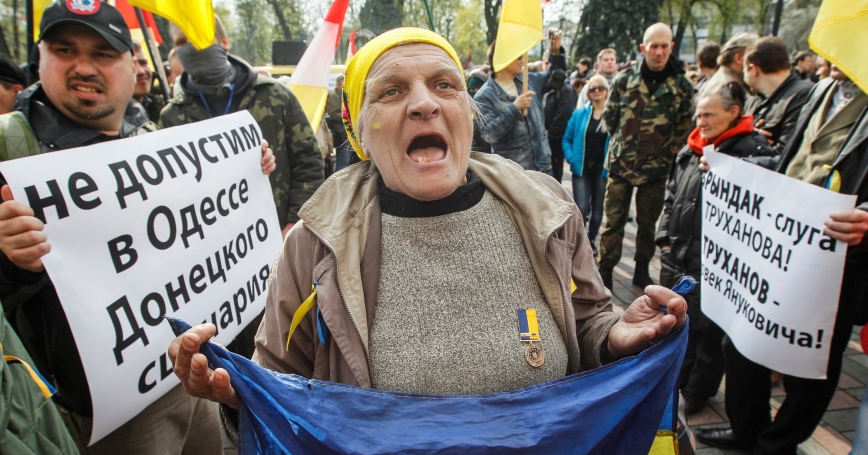 A woman shouts slogans during a protest against separatism in Odessa held outside the Ukrainian Parliament in Kiev April 15, 2014

by Jana Kobzova and Svitlana Kobzar

The argument for splitting Ukraine is that this would merely establish de jure a situation that already exists de facto, because Ukraine is deeply divided by its cultural identity/language differences. It would also supposedly settle tensions between the West and Russia because Moscow would get what it wanted and would not venture further. With Ukraine split into two, its western part could eventually move closer towards Europe while its Russian-speaking East and South would establish a state allied closely with Russia. This solution, the argument goes, would best reflect the preferences of the local population. Moreover, letting parts of the South and East go might also be sensible for economic reasons. The only problem with this proposal is that none of the arguments bear close scrutiny.

How important is language?

Ukraine's linguistic divisions are real. The majority of the country's Russian-speaking population lives in the East and South; most of those who speak Ukrainian live in the centre and the West, which has traditionally been more integrated with the rest of Europe for reasons of both geography and history. But is one's mother tongue the strongest factor influencing one's political choices? When sociologists pose questions relating to their respondents' identity, history or preference for a pro-EU or a pro-Russian foreign policy, the result is indeed a political map of Ukraine where the western and central regions exhibit very different preferences from those in the East and South.

But as Ukrainian political scientist Yevhen Hlibovytsky argues, research suggests that for ordinary Ukrainians there are other issues which are far more important for their political choices than language. These are mostly associated with their own security: economic security, rule of law, education or human security. When sociologists ask questions about these issues, the result is a map of political preferences which does not reflect geographical or linguistic divisions — it presents a picture of a relatively united country.

While there is some correlation between predominantly Russian-speaking parts of Ukraine and pro-Russian foreign policy preferences, language is not, in fact, the most important predictor of separatist sentiments. As American historian Timothy Snyder argues, 'It is true that Ukrainians speak Russian, but that does not make them Russian, any more than my writing in English makes me English.' Many Ukrainians are bilingual and speaking Russian is not the main indicator of their choices.

Moreover, having a preference for stronger ties with Russia does not equate to wishing to become a part of the Russian state — if language were the main deciding factor, the French-speaking parts of Belgium would have split off and joined France long ago. Also, language does not seem to be the main factor in people's attitudes to the political protests that swept Yanukovych from power: 15.6% of EuroMaidan participants spoke only Russian and 24% spoke both Russian and Ukrainian. In short, media reports, western and others, which picture Ukraine as a deeply divided, almost artificial state, are off the mark, focusing on divisions which play a much smaller role in the country's political life than it appears.

Do Ukrainians want their country to split?

The same goes for the EuroMaidan movement, which was and still is often misinterpreted by many as a simple fight between those who support Ukraine's pro-European orientation and those who do not (or favour closer ties with Russia). This simplistic view misses the point not only articulated by the leaders of the movement but backed by research carried out among those who took part in the protests. EuroMaidan's main objective was to change Ukraine's system of governance and rid it of corruption. On the streets, these goals were supported equally by people from the western and the southern and eastern parts of Ukraine (according to a poll in early February, 44% of participants in the Kyiv protests came from the Russian-speaking South or East).

There is a regional divide when it comes to how the EuroMaidan is seen by the broader population — it has much more support in the West and the Centre than in the East. But, as I explained above, these have little to do with linguistic divisions and are partly a question of political culture and greater exposure to Russian media.

The argument for splitting Ukraine along western/central and southern/eastern lines has little to do with either real divisions in the country or popular preferences. A recent poll by Kyiv's Razumkov Centre think tank clearly shows that local public support for splitting from Ukraine or joining another state doesn't go above 16% in any of Ukraine's regions. Until the Russian invasion of Crimea, the issue of separatism was simply absent from public debate — for comparison, in the run-up to the peaceful split of Czechoslovakia in 1993, the Czech and Slovak political elites both blamed the other nationality for the federal state's economic, social and political problems. Such attitudes are not part of Ukraine's mainstream political debate today. There is undeniable distrust of the interim government in different parts of Ukraine, which was further inflamed by the (subsequently suspended) move to annul the 2012 Language Law that enhanced the status of Russian and other minority languages. Yet none of the mainstream Ukrainian media or political parties are interested in vilifying one or other part of the country.

A 'shared neighbourhood': the idea of 'Europe' and post-Soviet realities

The second argument — that the splitting of Ukraine would finally mean the end of the more than two decades-long contest between the West and Russia for their 'shared neighbourhood', is mere wishful thinking. As Bulgarian political scientist Ivan Krastev writes, Russia's actions in Ukraine are about far more than Moscow reclaiming its former dominion: if the West 'gives up on' Ukraine, the danger is that Russia's appetite will only increase — what guarantee is there that if Belarus decided to loosen its relations with Moscow, Russia would not intervene? By occupying part of Ukraine, Russia sends out a signal that its borders are open to question.

Despite the country's complex history and regional divergences, the wish to pursue European integration has been a unifying, and not a dividing factor in Ukraine. The idea of 'Europe' has come to symbolise good governance, high quality healthcare, good education and general high living standards. According to a poll conducted by DW-Trend in 2013, only 31% of people in Eastern Ukraine were opposed to EU accession. There is also a generation gap: 67% of younger people support closer ties with the EU. And a recent nation-wide poll revealed that while Ukrainians would prefer not to have a visa regime or customs border with Russia, only 12% of them would want their country to unite with Russia. The highest level of support for unification is in Eastern Ukraine, but it is still only 26%.

The existence of fine degrees of ethnic divergence, with different parts of Ukraine not sharing historical memory and language, has not resulted in a public vote for separatism. Given the context of economic difficulties, social upheaval and one-sided media propaganda in some regions, it is not surprising that there are tensions and signs of discontent. However, splitting Ukraine would not just fail to resolve these tensions — it could exacerbate the crisis. Having a mix of ethnic Ukrainians living in some regions with a large population of ethnic Russians may make it difficult to opt for a 'velvet divorce', as the Czech and Slovak political elites once did.

What Ukraine needs now is democratic reform and a complete overhaul of governance that would allow it to make up for its stalled transition — rather than looking through the prism of division, it can turn its different languages and varied political aspirations and cultures from a weakness into a strength. This would not only consolidate the Ukrainian state but it would send a strong signal to Moscow that a multi-linguistic and diverse country can be ruled democratically.

Jana Kobzova works at the European Endowment for Democracy and is an associate policy fellow at the European Council on Foreign Relations. Svitlana Kobzar is a policy analyst at the nonprofit, nonpartisan RAND Europe and assistant professor, Vesalius College.

This commentary originally appeared on openDemocracy on March 20, 2014. Commentary gives RAND researchers a platform to convey insights based on their professional expertise and often on their peer-reviewed research and analysis.