Will Putin Fall Victim to One of History's Classic Blunders? 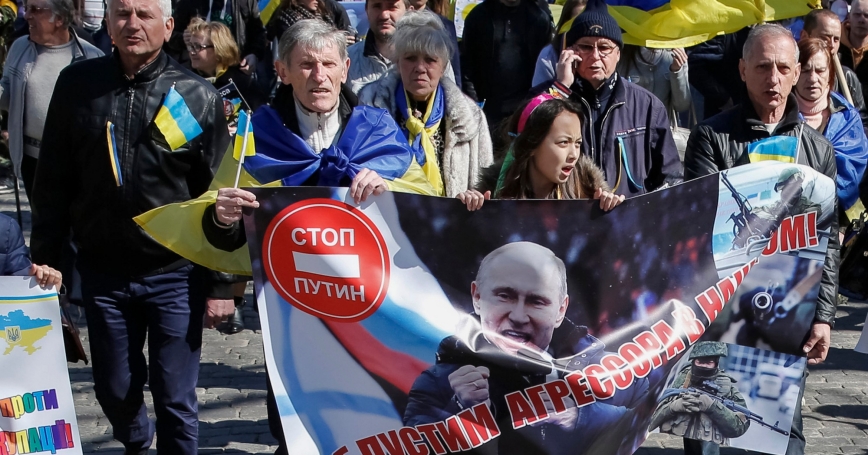 People rally against the annexation of Crimea by Russia, in Odessa, Ukraine. The banner with a portrait of Putin reads: "Will not let aggressor to our house."

From Napoleon to Bush, there's good precedent on why it's a bad idea for Russia to invade eastern Ukraine (or go in against a Sicilian when death is on the line).

As eastern Ukraine descends into a state of chaos and seeming anarchy, the specter of an invasion by Russia ticks ever upward. President Vladimir Putin has demanded a neutral and federated Ukraine, one that would be vulnerable to the Kremlin's coercion and might one day be partitioned. But with masked, armed pro-Russian demonstrators occupying government buildings in the eastern cities of Donetsk, Luhansk, and Kharkiv — and tens of thousands of Russian troops just across the border — the ante has been upped considerably.

But for all the justifiable fear that Putin is contemplating sending Russian troops into Ukraine, doing so would be a monumental blunder. As it is, Russia's annexation of Crimea is proving costly. Single-handedly, Putin has put the shaky Russian economy at peril; brought down international scorn, suspicion, and shame; awakened Europe from its strategic coma; revived NATO's fortunes; and boosted foreign competition for one of the few commodities Russia can produce and sell: natural gas. If Putin thought seizing Crimea would make the rest of Eastern Europe deferential to Moscow, the opposite is occurring, as anti-Russian/pro-NATO sentiment surges throughout the region.

And yet, Putin seems not to have intuited this lesson. Or perhaps he thinks he's already paid the price, and that taking eastern Ukraine now is worth suffering a bit more opprobrium. But this would be a major strategic misstep — it would bring much greater harm to Russia's people. The problem is that Putin shows all the signs of following in the footsteps of history's most infamous blunderers, and the decision-making traits he exhibits are both familiar and ominous.

Leaders who make big strategic mistakes are often afflicted with excessive hubris. Both Napoleon in 1812 and Hitler in 1941 had gained a string of decisive battlefield victories which gave them a sense of invincibility, if not destiny. Both, of course, invaded Russia and lost massive armies. Putin's hubris is not based upon a string of military victories, however, but upon a conviction that he knows how to intimidate Russia's neighbors. He has occupied two provinces of Georgia, directed cyberwarfare against Estonia, threatened Poland with nuclear missiles, manipulated the dependence of customers on Russian gas, and sought to provoke unrest among Russian minorities in other countries. He appears to think that the seizure of Crimea is a great success — ignoring the self-harm it will do — which reinforces his belief that he is in control, and that he can write a script in which others will meekly play their assigned roles. Such unwarranted confidence is a classic cognitive flaw that correlates strongly with a potential to commit blunders.

Leaders who make bad strategic decisions often are driven by grievances they feel need to be rectified or by messianic visions of future gains to be won by military might. Hitler sought vast space in the East for Germans to live and farm, which led to the invasion of the Soviet Union. As Japan entered World War II, Prime Minister Hideki Tojo believed in its divine right to rule much of Asia. Likewise, the Argentinean generals in 1982 thought they could recover what they saw as sacred territory in the Falklands conflict, so they attacked. In 1979, the Soviet Union overextended itself to militarily protect nascent communism in Afghanistan. Each of these flawed visions led not only to defeat, but to the eventual demise of the guilty party.

Putin carries a long list of grievances: NATO enlargement; Western interventions in Kosovo, Iraq, and Libya; U.S. abrogation of the Anti-Ballistic Missile Treaty; and what he sees as Western interference in Russia's domestic politics. His vision is to reassemble as much of the old Soviet Union as possible — short of producing war with NATO. This combination of hubris and grievance could compel him to take further risks with Russia's future.

Blundering leaders also typically underestimate the will, capabilities, and options of their adversaries, as well as the operational difficulties their forces will face. Hence, they are confident that success will come quickly. The list is almost endless: Napoleon misjudged Russian tactics in 1812, expecting them to engage in an early climactic battle near the border rather than drawing him deep into Russia, and total defeat. The German General Staff completely underestimated America's will and ability in 1917 to enter World War I before Great Britain could be starved into submission by U-boat attacks on neutral shipping. Hitler thought the rotten Soviet state would collapse if he just “kicked in the door.” China invaded Vietnam in 1979 expecting quick success, ignoring the fact that the Vietnamese had outlasted and defeated France and the United States in the preceding decades. The Argentinean junta ignored the possibility that British Prime Minister Margaret Thatcher would dispatch a military force to retake the Falklands. And, of course, the United States in 2003 miscalculated the duration and cost of occupying Iraq. Putin is similarly capable of underestimating the West's response (or domestic partisans) to an invasion of Ukraine.

Blunders also occur because leaders see short-term opportunities without weighing the long-term consequences of pursuing them. Japan's leaders believed they could create hegemony throughout East Asia before the United States recovered from the destruction of its fleet at Pearl Harbor. The Soviet Politburo was confident it could stabilize Afghanistan without considering the possibility that military intervention would have the opposite effect. And the United States sought short-term victory by invading Iraq and disregarded warnings about prolonged, bloody, costly insurgency. Putin may see a window of opportunity in Ukraine today, but does he understand the lasting damage to Russia that tougher Western sanctions could cause?

Strategic risks are sometimes taken to solidify personal authority at home. The Argentinean junta thought attacking the Falklands would make them heroes and assure their longevity; in fact, it hastened their removal. Putin's popularity — despite the success of the Sochi Games — was at a low point before he annexed Crimea; it has risen significantly since then. Any politician should know that the trend cannot last: But will he now overreach in an effort to ride the wave of Russian nationalism? Will Putin place a boost in his immediate political fortunes against the harm that could come to his country?

From Napoleon's and Hitler's invasions of Russia to the Soviet invasion of Afghanistan, from China's attack on Vietnam to the U.S. adventure in Iraq, history provides a lesson — not just of tactical or strategic failure, but of foresight: to think through what could have gone wrong. Likewise, Putin may reckon that the West fears getting involved or that Ukraine's regular military forces are no match for Russia's, but that is not the end of the story. Ukrainians could well fight an unconventional war, reminiscent of the one Afghans fought against Soviet occupiers. NATO may not send troops to defend Ukraine, much as it did not send troops to Hungary, Czechoslovakia, or Poland during the Cold War. But an invasion of Ukraine will stimulate Western defense spending that Russia, with its much smaller economy, cannot remotely match.

And there's one more dangerous analog. In virtually every blunder we have studied, the advisors, commanders, and institutions surrounding the decision-maker were unwilling or unable to speak truth to power — whether out of awe (for Napoleon), fear (of Hitler), intimidation (by Japanese generals), group-think (the Soviets), or loyalty (Bush). Silencing dissent, discouraging debate, dismissing doubt, showing who's in charge, and displaying decisiveness are frequent ingredients in strategic mistakes. Putin and his small, submissive entourage fit this pattern.

The recipe is there for all to see. And there are enough parallels between the great historical blunders and Putin's intentions today to make one anxious. One hopes that Putin and those around him will learn from the mistakes of others and refrain from an attack on Ukraine. Doing so could isolate Russia and impoverish its people. And Putin may think that he can change history, but the past has a funny way of informing the future.

This commentary originally appeared on Foreign Policy on April 14, 2014. Commentary gives RAND researchers a platform to convey insights based on their professional expertise and often on their peer-reviewed research and analysis.