Should the U.S. Rely on Russian Rocket Engines? 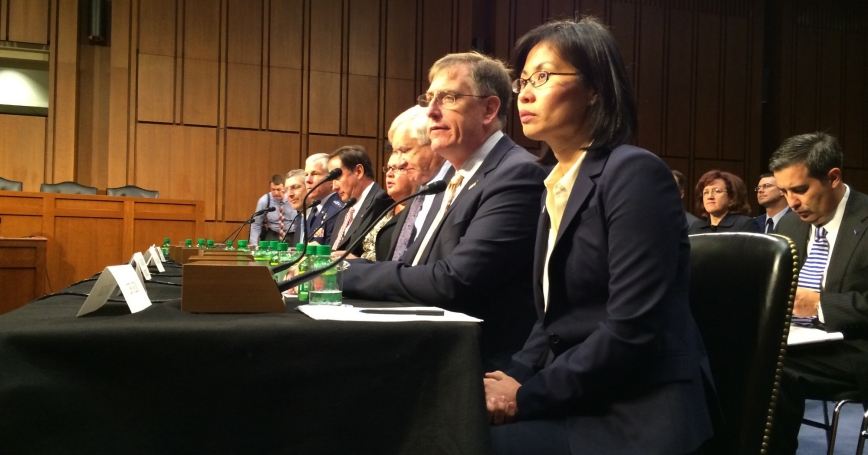 Yool Kim and other witnesses at the July 16, 2014 joint hearing of the Senate Armed Services Committee, Subcommittee on Strategic Forces and Senate Commerce, Science, and Transportation Committee

One of the two launch vehicles that lift U.S. satellites into orbit depends on a rocket engine — the RD-180 — made by a company located in Russia. Russia's recent clashes with Ukraine and its claims on the Crimean peninsula have caused friction with the United States and thereby raised questions among U.S. policymakers about the potential for a future interruption in the supply of the Russian engines.

Concerns were heightened when, in May, Russian Deputy Prime Minister Dmitry Rogozin told reporters that RD-180 engines would only be sold to the United States for non-national-security satellite lifts from now on.

It's still not clear whether a supply interruption would actually occur. At a Senate hearing on Wednesday, witnesses from NASA and the U.S. Department of Defense said they saw no indications that NPO Energomash, the Russian engine producer, might interrupt supply or limit the use of its engines. But it could happen, and policymakers in Congress have asked whether such an interruption would harm critical U.S. national security satellite launch capability and what could be done about it.

At Wednesday's joint Senate hearing, RAND senior engineer Yool Kim testified that if this were to occur, the United States would have options. In particular, Kim said the United States retains a stockpile of two year's worth of engines, based on the current launch schedule. That stockpile could be stretched out beyond two years if some satellites currently lifted by the RD-180 engines could be shifted over to the other U.S. launch vehicle, the Delta IV rocket, which is powered by engines made in the United States. For those satellites that could not be shifted to the Delta IV due to cost and technical issues, the existing U.S. RD-180 engine stockpile could be stretched even further by giving national security satellites priority over civilian and commercial ones.

Kim testified that these mitigation options could buy time during which U.S. policymakers could either pursue development of an alternative U.S.-made engine (which could take six years and cost somewhere in the order of $1 billion), or seek to certify new space launch vehicles to lift these same satellites. Although SpaceX's Falcon 9 launch vehicle is close to being certified by the Air Force, its larger Falcon Heavy vehicle — which is not as far along in the certification process — would be required to launch all the satellites currently carried by RD-180-powered vehicles.

Witnesses at the Wednesday hearing emphasized that launch vehicles are complex integrated systems in which a change of engine could well necessitate other vehicle and infrastructure changes. They said policymakers at NASA and the Department of Defense are assessing next steps in terms of both mitigation of potential short term challenges (e.g. launches over the next few years) and the options for broader, long-term solutions.