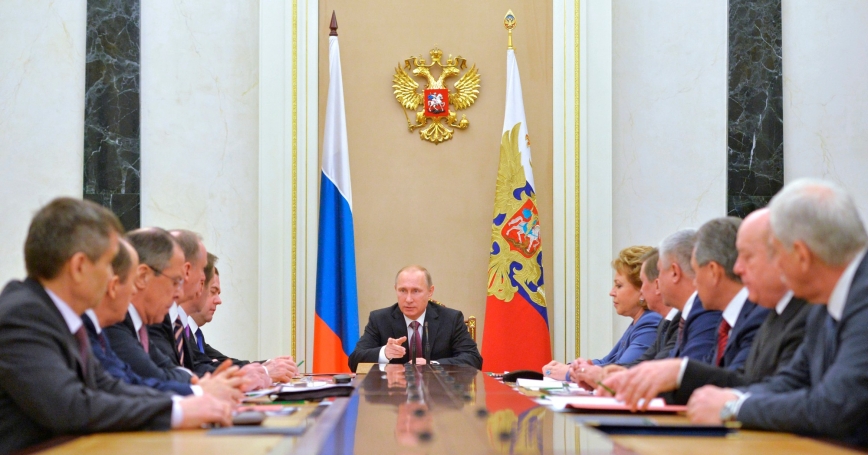 This past month, Russia published a new military doctrine. It had promised a new text in September 2014, in the wake of NATO's Wales Summit Declaration condemning Moscow's actions in Ukraine. Assuming that the document released Dec. 26 was started at that time, it was roughly four months in development—remarkably fast for a government bureaucracy that has traditionally taken years to vet such documents.

The new policy is a revision of Russia's last doctrine, published in February 2010. The new version repeats much of the language of the old and largely follows the same basic precepts. As in 2010, Moscow sees a general reduction in the likelihood of large-scale conflict involving Russia, combined with an increasingly dangerous overall security environment. The Kremlin's nuclear deterrent approach has also not changed: Russia's arsenal is meant to deter both nuclear and conventional conflict, but nuclear forces can be used only in the event of an existential threat. As before, this doctrine differentiates between “dangers” and “threats:” the former designates concerns, the latter possible sparks for conflict. As in 2010, the NATO alliance, or, more accurately, its behavior and intentions, is classed as a danger, as are terrorism and violations of international agreements.

But if many of the specifics are much the same, the tone of the overall document represents a shift, and a few of the individual changes are notable. This doctrine, in many ways something of a national security strategy document, is meant not only to describe Russian policy but also to send messages to friends, adversaries, and others. The challenge lies in understanding Russia's signals, as well as their repercussions.

As 2015 dawns, it seems that Russia sees the world as more perilous than in early 2010. The specific dangers, whether from NATO or elsewhere, may be much the same, but from Russia's perspective, they appear to have grown more immediate. For example, the 2010 doctrine spoke of NATO's (illegal, according to Moscow) intent to develop a global role and capabilities, to deploy military infrastructure near Russia's borders, and to continue to expand. The current doctrine describes these same things as actions already underway. Similarly, where before Russia worried about efforts to destabilize countries and regions, today it is concerned about the reality of destabilization.

The new doctrine is more specific about the Western weapons systems that endanger or threaten Russia. Global Strike, long a concern, is for the first time specifically called out in doctrine. Russia promises to oppose the efforts of others to “attain military superiority”[1] by deploying missile defenses, space weapons, or strategic conventional precision weapons. It calls for an agreement, under UN auspices, to regulate the use of space.

New in the 2014 doctrine is discussion of the danger of unnamed actors using information warfare and political subversion, as well as force, to destabilize and overthrow regimes. Russia itself, it seems, is at risk, and Russian youth are particularly vulnerable to subversion. The Kremlin also fears its adversaries' use of “special forces and foreign organizations.” A discussion of the attributes of modern warfare begins by describing it as “complex usage [integration] of military force and political, economic, information, and other non-military means, accomplished [in part] through the extensive exploitation of the potential of popular protest and special operations forces.” The description also notes the increasing prevalence of high-technology weapons, high-speed maneuver, irregular and contract forces, and so forth, but comes back at the end to “foreign-financed and controlled political forces and social movements.” While Western readers might immediately see aspects of this as strikingly descriptive of Russia's activities in Ukraine (and the Western debate on so-called “hybrid” warfare), from Moscow's perspective, these are threats to Russia. This recurring theme of combined military, “information,” “communication,” and political methodologies includes a call for dialogue with other states on how to counter such approaches. And while extended sections on mobilizing Russia's economy and society for war are similar to what was in the 2010 doctrine, they seem a bit more ominous in this context.

Some changes are more important than others. The 2010 doctrine described Russia's most important task as the prevention of nuclear and other war. The new doctrine describes war prevention as a cornerstone of military policy. Is this a change in emphasis? Given how much of the old language has remained in place, even minor shifts may have meaning, but some signals are clearer than others. This new doctrine for the first time explicitly mentions Russia's interests in the Arctic. This is perfectly in line with Russia's recent actions and statements, so not a surprise, but its inclusion in military doctrine is an important affirmation of Russia's position. Also new is a discussion of Russian plans to strengthen global ties, particularly in the Asia-Pacific region and with its fellow BRICs. Moscow also pledges to work with Abkhazia and South Ossetia towards common defense and security. These, too, underscore, but do not change, Russian positions. In addition, the 2014 doctrine highlights for the first time the deterrent capacity of Russia's conventional weapons (as opposed to only its nuclear arsenal)—perhaps a reference to the country's growing conventional might.

The new doctrine talks less of proliferation threats than did past versions, although the basic goals remain unchanged. The language on cooperation with NATO and the EU, while mostly similar, emphasizes the need for new, “non-bloc” security models. The discussion of cooperation in missile defense development emphasizes “equal” Russian involvement.

Russia maintains, as it has in the past, that it will use military force only defensively, when other options have failed. But this is the doctrine of a state that sees a lot to defend against, even as its interests expand globally. While neither Moscow's overall goals nor the threats and dangers it faces have truly changed, it seems the Kremlin has grown more nervous that others are seeking ways to harm it, militarily and otherwise. Little here is new, but nothing here suggests an opening for compromise. Rather, the Kremlin wants the world to know that Russia is settling in for a long siege, preparing to rally its resources and determined not to back down. This is a country that will be very difficult to reassure, even if other states are inclined to try. The resulting danger is that Moscow's view of threats everywhere may thus prove self-fulfilling.

Olga Oliker is director of the RAND Center for Russia and Eurasia at the nonprofit, nonpartisan RAND Corporation.

This commentary originally appeared on The Washington Post Monkey Cage Blog on January 15, 2015. Commentary gives RAND researchers a platform to convey insights based on their professional expertise and often on their peer-reviewed research and analysis.