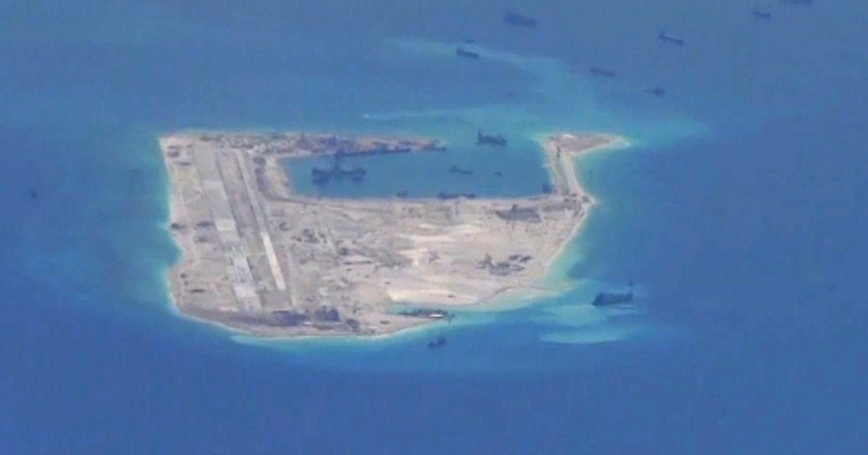 Chinese dredging vessels are purportedly seen around Fiery Cross Reef in the disputed Spratly Islands in the South China Sea May 21, 2015

Although China is not the first state to build an airstrip in the South China Sea, it is the first state to employ island-building technologies to transform a contested maritime feature into a military base that extends the reach of offensive military capabilities. Other countries have worked to project power to contested South China Sea features; with the airstrip on Fiery Cross Reef, China has worked to project power from them.

For context, Beijing's efforts to militarize Fiery Cross Reef are only a small part of China's massive and controversial program to create a “Great Wall of Sand” across the South China Sea — in the words of the previous Commander of Pacific Fleet. Beijing has gone far beyond traditional land development: it has dredged and dumped enough sand in the South China Sea to create approximately 2,000 acres of artificial islands. While China claims that its island-building program is “beneficial to the whole of international society” because it will enable Beijing to project power across the South China Sea for search and rescue efforts, the Association of Southeast Asian Nations (ASEAN) disagrees. In a statement released in April, ASEAN leadership found that China's island-creation program had “eroded trust and confidence and may undermine peace, security and stability.”

To understand how different China's behavior is — and how distinct Fiery Cross Reef's airstrip is — a chronological summary of the rival claimants' airfield construction and modernization activities might be useful:

Although Vietnam, Malaysia, Taiwan, and the Philippines built their own airfields in the area well before China commenced its massive island building and military construction program last year — and other countries are now working to maintain or improve some of their facilities — Beijing's activities are on a scale that vastly exceeds what any of its rival claimants are capable of doing. Beijing's island building and airfield construction at Fiery Cross Reef appears aimed not only at strengthening its sovereignty claims, but also at extending its ability to project power into the South China Sea, where Beijing was previously constrained by distance from the Chinese mainland and the Chinese military's relatively limited aerial refueling capabilities. As Andrew Erickson observes, Beijing does not need a 3,000-meter runway “to support evacuation of personnel for medical or weather emergencies via turboprop and other civilian aircraft.” On the contrary, he said, “such a runway is only needed to support a full range of military options.” Indeed, the airfield could be used not only for purposes such as evacuations or emergency landings, but also to accommodate a variety of types of military aircraft, such as various types of intelligence, surveillance, and reconnaissance and combat aircraft. Although in the event of a regional crisis or conflict China's new airfield could be vulnerable to attack, especially by a highly capable adversary, it might nonetheless offer China formidable options against its less capable rival claimants.

Even if China really sees itself as undertaking legitimate activities to protect its rightful interests, it should come as no surprise that China's rival claimants, as well as the United States and other countries in the region, see Beijing's island building and construction activities, like Fiery Cross Reef airfield, as efforts to improve China's abilities to bully its neighbors. Some observers might even consider the process of improving these abilities to be, in and of itself, a bullying tactic. Accordingly, many have criticized China's actions as destabilizing and urged Beijing to forsake such coercive tactics — and instead choose diplomacy to address its maritime territorial disputes.

Ben Purser is a doctoral candidate at the University of Colorado and a graduate of Carleton College, the Hopkins Nanjing Center, and the U.S. Naval War College. He served approximately nine years an intelligence officer in the U.S. Navy and now works security issues as an adjunct for the RAND Corporation.

This commentary originally appeared on Asia Maritime Transparency Initiative, CSIS on July 29, 2015. Commentary gives RAND researchers a platform to convey insights based on their professional expertise and often on their peer-reviewed research and analysis.