In Latin America, Breaking the Cycle of Intimate-Partner Abuse One Handwritten Letter at a Time 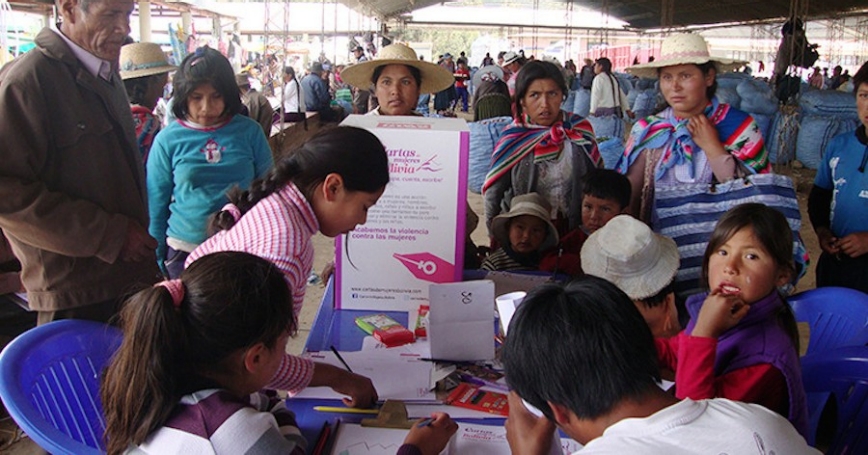 Latin America has one of the highest rates of intimate-partner violence in the world. More than 50 percent of women in Peru and Bolivia experienced physical or sexual violence at the hands of an intimate partner, according to a 2013 study. Femicide, the intentional and gender-motivated killing of a woman, often by a domestic partner, is rampant in the region. Every other day, a Bolivian woman dies (PDF) as the result of femicide, while an average of two women a day are murdered in Guatemala (PDF).

Intimate partner violence in Latin America, just like elsewhere in the world, often occurs in the home, hidden from public view. In addition, a substantial proportion of women polled in a Reproductive Health Survey (PDF) conducted in Bolivia, the Dominican Republic, Haiti, Nicaragua, and Paraguay expressed the belief that outsiders should not intervene to help abused women—and that family problems should remain private.

Indeed, the number of women who agreed that a wife should obey her husband (PDF) even if she disagrees with him ranged from over one-fourth of women in urban Paraguay to nearly three-fourths in rural Guatemala. These pervasive norms discourage women from seeking help, make it easier for outsiders to avoid intervening in abuse situations, and permit impunity to thrive. Moreover, this culture of silence has hindered research and made data collection challenging.

The situation differs in Bolivia, said Noah Friedman-Rudovsky, a freelance photojournalist and videographer who has lived there for 12 years. A series of high-profile cases, including the murder of a journalist by her policeman husband, have propelled intimate-partner violence to the fore of the public agenda. Bolivia may be ready for reforms, Friedman-Rudovsky said, because it has undergone other positive social changes. For example, it ranks second in the world in terms of how many women serve in its parliament, with 53 percent of the seats held by women, outpaced only by Rwanda (with 64 percent).

Still, intimate violence cases that become public in Bolivia and other Latin American countries do so with a sensationalism that reinforces victim blaming. This is where the Cartas de Mujeres (Letters from Women) campaign comes in. It is a joint effort by U.N. Women, the Ecuadorean city of Quito, and the German development agency GIZ. The initiative is part of the global campaign, UNiTE to End Violence against Women, sponsored by U.N. Secretary-General Ban Ki-moon and launched in Ecuador in 2011. The initiative has since spread throughout Peru and Bolivia. The campaign seeks to break the silence associated with gender-based violence, raise public awareness of the problem, and encourage social mobilization.

Participants tell their stories of abuse by writing letters in workshops and public places, including at shopping malls, hospitals, markets, schools, and prisons. After the letters are turned in to organizations running the campaign, they are eventually forwarded to pertinent city, regional and national officials and lawmakers.

A 50-year-old Ecuadoran woman writes to her three sons and a daughter about the torment of intimate violence and accompanying silence that is wrongly considered “normal ... so we turn our souls inside out with shame.” A Peruvian woman writes how she had been terrorized as a teenager by a handicapped man who berated her in vulgar language and exposed himself when she would pass him on the street. Years went by before she finally “mustered the strength that came from inside my chest and yelled at him ... 'Pervert! ... Now I will break your good leg!' ... And I chased after him as fast as I could. That is how the fear that that man was responsible for during my adolescent years was forever exorcised from my body.”

Men write letters about what it was like to be an aggressor. Children write about witnessing or experiencing violence at home. Although writing letters is the main activity, drawings and “spoken letters” are encouraged. “Breaking Silence,” a documentary about femicide in Bolivia, Ecuador, and Peru serves as an extension of the campaign, telling the stories of three women who were abused and how the system is changing to help victims like them.

More than 44,000 letters have been submitted, said Christine Brendel, regional program director for ComVoMujer (Fighting Violence against Women) in Peru, Ecuador, Bolivia, and Paraguay. She said the organization works with Peruvian and Bolivian towns and cities to widen its outreach to women. The campaign seeks broad participation among the media, women's groups, and local and national governments. In Ecuador, the postal service delivered the letters for free.

A team since has read, digitized, and analyzed the collected letters, sorting them into themes, and then delivering them to the appropriate officials for response or potential action. Participants suggested how officials can avert gender-based violence and advocated for increased funding for prevention and treatment. Some letters were published and exhibited with the authors' permission. In Peru, the letters were given to a university for analysis and investigation; in Bolivia, they were delivered to the state's ombudsman.

Besides serving as a powerful policy tool, this campaign, Brendel said, has been liberating and healing because it helps remove the stigma surrounding intimate violence and showed victims that their experiences were shared by many.

Bolivia has since passed laws protecting women against violence and against political prosecution of and violence against women in political office. In southern Peru, the Ica regional government, working with ComVoMujer, developed and put in place a strategy to protect women from violence as part of its development plan. Momentum is also building in neighboring countries, including Guatemala, which is implementing the letter-writing campaign.