Xi's Purge of the Military Prepares the Chinese Army for Confrontation 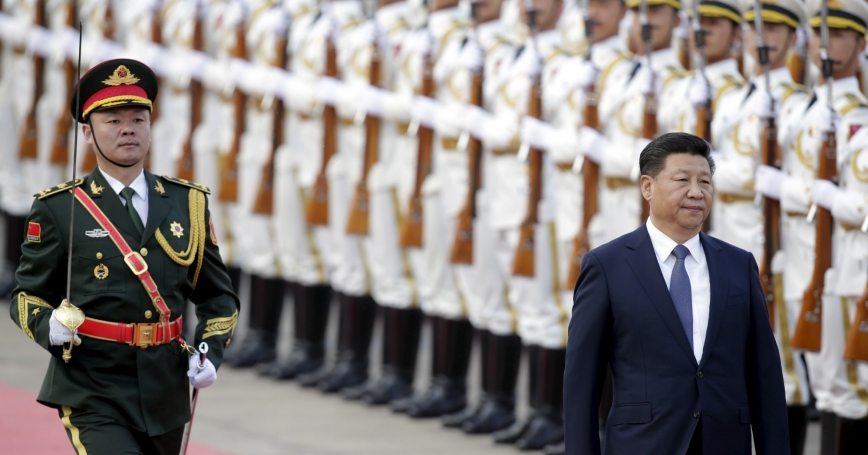 Much has been made of Chinese leader Xi Jinping's flurry of announcements in recent months signaling major structural reforms to the People's Liberation Army (PLA), scheduled for completion by 2020.

While understanding the details of Xi's reforms is critical to assessing the direction of PLA modernization going forward, it is also necessary to consider the broader implications of the apparent nature of Xi's relationship with the military.

Many observers have stated the obvious: Xi, who serves concurrently as China's President, General Secretary of the Chinese Communist Party and Chairman of the Central Military Commission (CMC), is as “large and in charge” in military circles as he is in Chinese politics more generally.

This certainly appears to be true, but the manner in which he holds sway over the PLA is worthy of more attention than it has received. Xi is relying on an unprecedented anti-corruption campaign, echoing Mao Zedong's dictum that “the party commands the gun,” and implementing a sweeping reorganization of the PLA to ensure his personal dominance over the military and to strengthen its ability to deter or win future wars.

When Xi assumed power in November 2012, he vowed to fight both “tigers” and “flies”—a reference to taking on corrupt leaders at the highest levels as well as lower-level bureaucrats engaged in corrupt practices throughout the Chinese system, and the PLA would be no exception.

The arrests were unprecedented in that Xu and Guo were the two highest-ranking officers in China's military when they served as CMC Vice chairmen, and their arrests marked the first time the PLA's highest-level retired officers faced corruption charges.

As of early March 2016, Xi's anti-corruption campaign had reportedly resulted in the arrest of at least 60 military officers, although the actual numbers could be higher. The military anti-corruption drive is part of a much broader dragnet—all told, throughout China, more than 1,600 individuals are either under investigation for corruption or have been arrested, purged, or sentenced since Xi came to power.

Xi's immediate predecessors, Hu Jintao and Jiang Zemin, were concerned about corruption, but neither had the stature among the top brass to target the upper echelons of the PLA with such daring.

Xi appears to believe that a lack of civilian leadership intervention, especially under Hu and Jiang, has resulted in a substantial drift of the PLA away from the party oversight Mao famously identified as so crucial.

This, in Xi's view, explains why the PLA became so pervasively corrupt under his predecessors. Xi therefore instills fear in his senior military officers by reminding them that his status as the most powerful Chinese leader in decades allows him to intervene at will to curb the PLA's excesses.

Xi drew a direct line between Mao and the present at a major meeting in November 2014. In commemoration of the 85 th anniversary of the “Gutian Congress” at which Mao first affirmed the “party's absolute control over the military” in 1929, Xi convened 420 of his most senior officers to meet in the small town of Gutian in southeastern Fujian Province.

To our knowledge, this was the first time a PRC leader reconvened military leadership at Gutian since Mao's famous meeting there—symbolism that was certainly not lost on the top brass.

Besides the obvious deference to Mao, Gutian's message was also very much derived from Mao's conceptualization of the proper balance between the party and military. Prior reading material, for example, reaffirmed the unassailable and preeminent position the party has over the military.

Another is a sweeping reorganization of the military that has the potential to be the most important in the PLA's history. The new system aims to place the services on a more even footing in the traditionally army-dominated PLA and enable the military to more effectively harness space, cyberspace and electronic warfare capabilities. It also establishes new “theater commands” to enhance the PLA's readiness and strengthen its deterrence and warfighting capabilities.

Importantly, despite some speculation to the contrary, Xi's assertion of control over the military in the form of the anti-corruption campaign and organizational reforms is more likely to enhance than it is to impede the PLA's ongoing modernization efforts.

Part of Xi's “China Dream” is to produce a strong military capable of deterring, or if necessary taking on powerful potential adversaries, including even the United States.

Xi wants a PLA that demonstrates utmost loyalty to the party, but he also wants a far more competent and operationally capable PLA by 2020, one that is commensurate with China's status as a major world power and capable of protecting China's regional and global interests.

If his aspirations are realized, Xi's reformed PLA will soon be capable of posing an even more potent challenge to China's neighbors, and to U.S. objectives and strategy in the region.

Derek Grossman is a senior project associate at the nonprofit, nonpartisan RAND Corporation. Michael Chase is a senior political scientist at RAND and a professor at the Pardee RAND Graduate School.

This commentary originally appeared on Newsweek on April 21, 2016. Commentary gives RAND researchers a platform to convey insights based on their professional expertise and often on their peer-reviewed research and analysis.