Before Obama Leaves Office, Here's What He Should Do About Iran 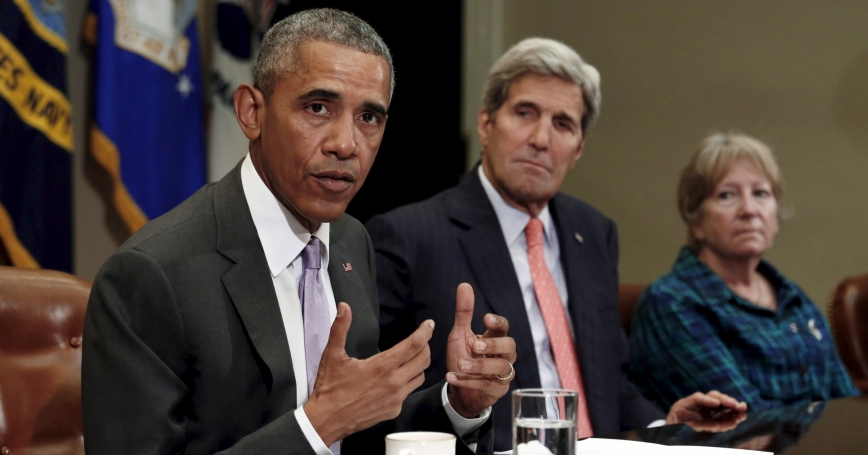 by Zalmay Khalilzad and James Dobbins

America's relationship with Iran poses a classic geopolitical dilemma. Iran is an important regional power that pursues adversarial policies with its neighbors and represses its people at home. Yet the United States can only address key issues affecting U.S. interests if it engages Tehran wherever possible. As it did vis-à-vis the Soviet Union during the Cold War, the United States needs to pursue policies designed to preclude regional hegemony and to create a balance of power in the region, while also expressing support for human rights and engaging Iran diplomatically.

If the chaos in the Middle East is to be calmed, the United States will have to work not just with traditional partners but also with competitors. Iran has contributed to the sectarian polarization of the Middle East and the conflicts that region has fostered, but it isn't the sole cause of these. Washington and Tehran are at loggerheads over Syria, but they support the same governments and leaders in both Afghanistan and Iraq.

To enable productive engagement, the United States will have to work with its partners in the region to establish a favorable balance of power. This means continuing its military deployments and arms sales to ensure the security of the Persian Gulf, while asserting its rights under the new nuclear agreement to prevent Iran from making covert progress toward a weapon. At the same time, the United States should start planning a policy framework to deter Iran from restarting nuclear programs once certain restrictions in the agreement lapse. Finally, the United States and its partners must jointly compete against Iran in Iraq and Syria.

Such efforts will better position the United States to engage Iran to settle regional conflicts and defeat the Islamic State. Each of us led discussions with Iran during the administration of George W. Bush, and we were able to achieve limited understandings in some areas and even active cooperation in others. The Bonn Agreement, which established the post-Taliban interim government in Afghanistan, was the apogee of this cooperation, and it would have been difficult, if not impossible, to achieve without Iran's support. Notably, this success occurred in the context of the active assertion of U.S. power against the Taliban. The United States can likewise craft policies to shape the political and military contexts in Iraq and Syria.

During the Obama administration, contacts with Iran have focused most heavily on nuclear issues. But these contacts occur irregularly, involve a small circle of individuals and tend to address only the most urgent issues. Secretary of State John F. Kerry may have Iranian Foreign Minister Mohammad Javad Zarif on speed dial, but there is only so much that two very busy men can accomplish. In any case, Kerry will likely be leaving office in a few months, and the U.S.-educated Zarif will eventually do the same. There is no guarantee their successors will establish the same kind of rapport. U.S. policy should not be dependent on their doing so.

Before he leaves office, Obama should take steps to enhance communications between America and Iran.

That's why before he leaves office, President Obama should take steps to enhance communications between the two countries. The most obvious move would be to reestablish normal diplomatic relations. It is not clear that the Iranian regime would be ready to go this far, however, and such a step would be quite controversial in the United States as well.

Short of that, however, the Obama administration and the Iranian government could assign middle-ranking U.S. and Iranian diplomats to the interests sections of the embassies that already represent each to the other. It is worth noting that the United States had a substantial diplomatic presence in Cuba before the resumption of full diplomatic relations last year. An even more modest measure would be for the United States to simply allow Iranian diplomats accredited to the United Nations in New York to travel to Washington on occasion. Such a gesture might be reciprocated by Iran, allowing visits by U.S. officials based in Dubai, where the United States maintains an office that monitors Iranian affairs.

U.S.-Iranian engagement should certainly focus on the battle against the Islamic State, but it should also focus on the pathways to stabilizing the region. The United States should seek to help Saudi Arabia, Turkey and Iran come to an understanding regarding Iraq and Syria and to explore a Westphalia-like agreement to curb sectarian and geopolitical conflict. Such an agreement will not occur without active mediation from the outside. Currently, only the United States can play that role.

In addition, Obama should not ignore the aspirations of the Iranian people, many of whom hope for greater freedom and contact with the world. Human rights issues should be part of the agenda for any enhanced engagement. Also, the United States should facilitate private travel between the two countries for students, scholars and ordinary citizens. The best way to do this would be to resume direct commercial flights between the two countries. This step would be of particular benefit to the hundreds of thousands of Iranian Americans and their many relatives in Iran.

None of these steps would resolve the many differences between the United States and Iran on their own. Better communication does not always yield accommodation. But better communication always yields better information, and better information always permits, even if it cannot guarantee, better policy. It is difficult to see how the Middle East can be stabilized without engaging and coming to some understandings with Iran.

Zalmay Khalilzad, a counselor at the Center for Strategic and International Studies, was U.S. ambassador to Afghanistan, Iraq and the United Nations under President George W. Bush. James Dobbins, a senior fellow and distinguished chair in diplomacy and security at the nonprofit, nonpartisan RAND Corporation, was the Bush and the Obama administrations' special envoy for Afghanistan.

This commentary originally appeared on Washington Post on June 16, 2016. Commentary gives RAND researchers a platform to convey insights based on their professional expertise and often on their peer-reviewed research and analysis.