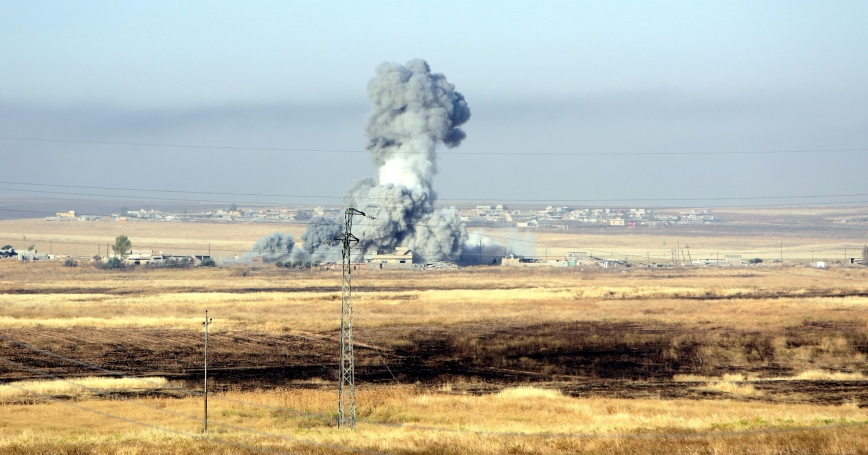 Smoke rises after airstrikes from the U.S.-led coalition against Islamic State militants in a village east of Mosul, Iraq, May 29, 2016

One reason behind this momentum has been the successful fight to counter ISIL's finances. After the May, 2015, raid against ISIL Oil and Gas Emir Abu Sayyaf yielded terabytes of data on the group's oil operations, U.S. airstrikes kicked off a major effort last year to cripple ISIL's oil production in Iraq and Syria, dubbed Operation Tidal Wave II. Airstrikes have hit ISIL tanker trucks, oil fields and refineries, and the group's overall revenues have been reduced by 30 percent. In January, U.S. warplanes began to target the banks where ISIL stores its cash, destroying millions of U.S. dollars and Iraqi dinars used by the group to finance operations and pay its fighters. In line with precursor groups' past behavior under pressure, ISIL has cut fighter salaries in half due to cash shortages in Raqqah, Mosul, and across its territory.

The net effect of these operations has been crystal clear — ISIL's coffers simply aren't what they used to be. Administration officials and analysts alike have been quick to pile on praise for this part of the campaign, correctly labeling the financial line of effort a success.

However, it would be a mistake to view the Islamic State as a poor man's version of its old self. New steps are needed to counter the group's wealth.

In May 2016, Assistant Secretary of the Treasury for Terrorist Financing, Daniel Glaser, stated (PDF) that ISIL's main income now comes from taxing and extorting the local population. Far exceeding oil revenues, taxation brings in an alarming $360 million per year in revenue according to Glaser. This leaves ISIL with a potent war chest still at its disposal. As work continues toward the primary goal of rolling the group back from its territory, work should also continue to try and stop ISIL from taxing and stealing money from within that territory....

Eric Robinson is a research programmer and analyst at the non-profit, non-partisan, RAND Corporation. He served as a civilian advisor supporting U.S. special operations forces in Afghanistan in 2014 and 2015.

This commentary originally appeared on The National Interest on July 20, 2016. Commentary gives RAND researchers a platform to convey insights based on their professional expertise and often on their peer-reviewed research and analysis.