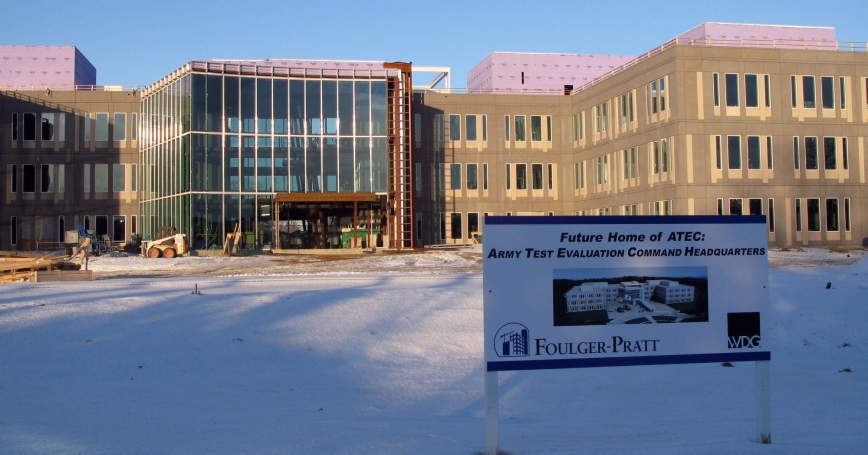 Construction on the Army Test and Evaluation Command headquarters at Aberdeen Proving Ground, Maryland, as part of a 2011 BRAC plan

It is widely believed that the Department of Defense is currently paying billions of dollars a year to maintain excess infrastructure because Congress has prohibited additional rounds of Base Realignment and Closure, commonly known as “BRAC.” For example, during a House Armed Services Committee hearing in February, the Vice Chief of Staff of the Army General Daniel B. Allyn and the Vice Chief of Staff of the Air Force General Stephen W. Wilson expressed their support for additional rounds of BRAC. According to their testimony, even after increasing to 490,000 active-duty soldiers the Army will have 21 percent excess capacity. The Air Force currently has 25 percent excess capacity.

According to the 2005 Defense Base Closure and Realignment Commission, BRAC actions in 1988, 1991, 1993, and 1995 resulted in the closure of more than 300 bases across the U.S. The 2005 commission identified an additional 12 bases for closure. In its Fiscal Year 2017 budget estimates, the Department of Defense reported that the annual recurring savings from these base closures and realignments are about $7 billion.

This situation invites the question: If it is widely recognized that a new BRAC could free up billions of dollars to be spent on readiness, equipment, and increases in the size of the armed forces, why is it so difficult to get the necessary authorization from Congress?

Opponents of BRAC have argued that the last round did not produce the expected net benefits.

One factor is a debate about the net costs and benefits of off-loading the excess infrastructure. BRAC activities present near-term expenses, such as environmental remediation and clean-up of unexploded ordinance, in the expectation of greater savings in the long term. Opponents of BRAC have argued that the last round did not produce the expected net benefits.

Nonetheless, the underlying answer to this question is that no potentially impacted community or its elected representatives wish to be the bill payer for an action that would benefit everyone else while hurting them economically. In the political science literature, this forms what is called a “collective action problem.”

The communities in which military bases are located benefit economically from the direct spending by the Department of Defense on expenses such as the salaries of military personnel and government civilian employees. In turn, these individuals and their families spend money on numerous things such as groceries, haircuts, gasoline, and car repairs. This spending results in employment for store clerks, barbers, mechanics and countless other workers. Even if it would make the DoD more cost efficient as a whole, it should be no surprise that communities fight to keep “their” bases.

The situation is made more complex by the fact that the Department of Defense can, and sometimes has, relocated units without closing their old base. This means that the community lost a significant portion of direct spending without any offsetting benefits such as the gain of real estate. These losses may exceed the value of the direct spending maintained at a base that is kept open despite a significantly reduced military presence.

However, the political science literature also offers a solution to collective active problems such as this: side payments. This approach entails the beneficiaries of an action helping to defray the cost experienced by the “losers” in order to gain their cooperation. For example, an under-appreciated outcome of a base closure under BRAC is that it usually results in the transfer of valuable property to the local government or some other public entity. For example, in my hometown of San Diego the closure of the Naval Training Center eventually resulted in the creation of Liberty Station, a vibrant area of hotels, restaurants, and shops that probably create more economic activity than the previous Navy base. But this result took many years and at the time of closure the eventual outcome was uncertain.

Previous BRAC rounds also provided some impact funding, but not enough to sway the affected communities. Redevelopment assistance and other types of payments to impacted communities could be significantly increased and thus decrease opposition to additional closures. Such an arrangement would reduce the total amount of cost savings of a BRAC to the Department of Defense, but if calculated properly would still produce a significant net benefit.

As the new administration calls for increases in military spending, there is a risk that people might believe that additional funding for the military will obviate the problem of excess infrastructure. This is not true. Even when the size of U.S. military forces was at its recent peak during the height of the wars in Afghanistan and Iraq, there were plenty of bases that were wasteful to keep open. Taxpayer dollars have been used inefficiently for decades to maintain bases that should have been realigned or closed. This condition is not merely a result of the post-Operation Iraqi Freedom and post-Operation Enduring Freedom drawdowns. Counterintuitively, the military budget increases proposed by the Trump administration present an opportunity to push for base closures by increasing the availability of funds to support the near-term costs such as impact funds.

The details are complex and need to be negotiated, particularly the amounts of impact funds and precisely how they should be dispersed (e.g., block grants to cities and counties, funding for non-governmental agencies, extended impact funding for local schools, etc.). Nonetheless, if the goal is more efficient use of defense dollars, policymakers might want to consider the option of allowing new rounds of BRAC that provide significant offsetting funds for impacted communities.

This commentary originally appeared on The Hill on March 15, 2017. Commentary gives RAND researchers a platform to convey insights based on their professional expertise and often on their peer-reviewed research and analysis.