Where Do ISIS Fighters Go When the Caliphate Falls? 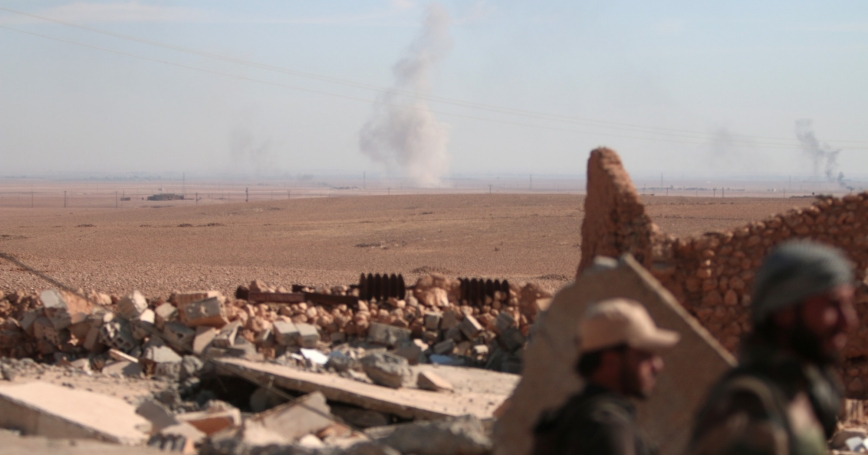 Smoke rises in the background as Syrian Democratic Forces fighters stand near rubble of a destroyed building, north of Raqqa, Syria, November 7, 2016

The Islamic State is reeling. With its finances cut in half (PDF) over the past six months, its media and information operations in tatters, and the offensive in western Mosul eating through its territory, the end of its so-called caliphate across the Middle East seems near. While a clear-cut victory is far from inevitable, at the current rate, it is conceivable that U.S. forces and their allies will defeat ISIS in Iraq and Syria by killing and capturing its fighters, driving the group from key cities and villages in what formerly constituted its vaunted caliphate, and ultimately taking Raqqa, its stronghold.

The focus, then, will shift to what ISIS's foreign fighters—who at their peak numbered tens of thousands from dozens of countries—will do next. There are several possibilities.

When a conflict ends, either through force or negotiated settlement, transnational terrorists are likely to disperse in numerous directions. ISIS fighters are unquestionably capable: Dug in to their positions, they have skillfully used tunnels and subterranean networks to move men and materials, and have perfected the production and deployment of vehicle-borne improvised explosive devices to keep their adversaries at bay.

The “hardcore fighters,” especially the foreign ones within the inner circle of ISIS leader Abu Bakr al-Baghdadi and his top commanders, will likely remain in Iraq and Syria, and look to join the underground resistance of an “ISIS, 2.0.” In all likelihood, these guerrilla insurgent shards of ISIS will congeal into a clandestine terrorist organization. Besides conducting sporadic raids, ambushes, and, perhaps, spectacular attacks using suicide tactics, these ISIS fighters will rest, rearm, and recuperate.

During this time, the militants may switch their allegiances between a smattering of groups on the ground, including ISIS, Jabhat Fateh al-Sham, and Ahrar al-Sham (already a loose coalition of Islamist and Salafist units), and will actively seek out ungoverned areas still beyond the writ of either Syrian or Iraqi government forces and their allies. As the terrorism expert Bruce Hoffman has suggested, if the fortunes of ISIS continue to decline, there may be a group of jihadists that see rapprochement with al-Qaeda as the only option to continue their struggle. Interviews with some Western ISIS fighters suggest that the ideological differences between al-Qaeda and ISIS are too significant to be bridged quickly, but this may change over time.

A second group of fighters are those potential “free agents” or mercenaries who are prevented from returning to their home countries. They can be expected to form a cohort of stateless jihadists who will travel abroad in search of the the next jihadi theater—Yemen, Libya, West Africa, or Afghanistan—to protect, sustain, and expand the boundaries of the so-called caliphate. These are the militant progeny of the original mujahideen, or transnational jihadists that once filled the ranks of al-Qaeda and fought in Afghanistan against the Soviets, and in Chechnya and the Balkans. ISIS affiliates and local Sunni jihadists in these places would likely welcome an influx of battle-hardened comrades.

And then there is the third group of foreign fighters: “the returnees.” This is the cohort that most concerns those in counterterrorism circles. These fighters may attempt to return to their countries of origin, like Tunisia or Saudi Arabia, or go further afield to Europe, Asia, or North America. States with more robust national defense structures—well-trained border police, world-class intelligence services—stand a better chance of blunting their impact. But all Western security services are not created equal: Some will inevitably have a tougher time containing this threat than others. Further complicating the issue is the inability among nation-states, especially those within the European Union, to even agree on the definition of “foreign fighter.”

The returnees are not as homogeneous a group as they may seem. Some will be among the “disillusioned”—those that went to Syria in search of utopia, adventure, and an opportunity to express their religious identity and instead found something far different. According to interviews and other research (PDF), local Syrians—whom the fighters said they went to “save”—did not respect them. These fighters struggled to fend for themselves when it came to obtaining basic things like food and financing, and grappled with the tribulations of war. But upon returning to the West, they could be used to mentor other radicalized youth. These fighters may require psychological care, not prison time.

There is a second subgroup of returnees that we'll call the “disengaged but not disillusioned.” Just as militants are motivated to join the fight for a variety of reasons, they may leave it behind for any number of reasons: an impending marriage, battle fatigue, or because they miss their families. They are, however, still committed to jihadism. As one returnee recently said, “I left ISIS, but if another fight happened somewhere else, I would probably go.” This individual grew disillusioned with ISIS as an organization, but not with jihad as a whole.

The final subgroup of returnees are the “operational” returnees: returning fighters who attempt to resuscitate dormant networks, recruit new members, or conduct lone-wolf style attacks. They will be well-positioned to attempt attacks under the command and control of what remains of ISIS in the Middle East. They are the most deadly (PDF). The November 2015 Paris attacks, conducted by foreign fighters who trained in Syria and were dispatched to France, are perhaps the clearest instance of this. Operational returnees are an even bigger concern if, in fact, hundreds of operatives have already been deployed to Europe, with hundreds more hiding out on Europe's doorstep in Turkey.

For the West, countering these different groups will require a range of strategies. The hardcore fighters who remain in Iraq and Syria must be killed or captured by Iraqi Security Forces and the rest of the coalition battling ISIS. Taking on the roving bands of militants calls for continued efforts to build the partner capacity of host-nation forces in weak and fragile states—training and equipping military and security forces, strengthening the rule of law, and promoting good governance and a host of other medium- to long-term objectives.

While the EU is distracted with the fallout from Brexit and Russian meddling in national elections, militant jihadists will be streaming back into Europe, some of them determined to strike. And while transnational terrorists will undoubtedly flock to Libya and Yemen, the real challenge will be preventing further attacks around the globe, including in major European cities.

Colin P. Clarke is a political scientist at the RAND Corporation and an associate fellow at the International Center for Counter Terrorism. He is the author of Terrorism, Inc.: The Financing of Terrorism, Insurgency, and Irregular Warfare. Amarnath Amarasingam is a senior research fellow at the Institute for Strategic Dialogue and a fellow at the George Washington University's Program on Extremism.

This commentary originally appeared on TheAtlantic.com on March 6, 2017.