What Street Food Vendors in Uganda Need to Succeed 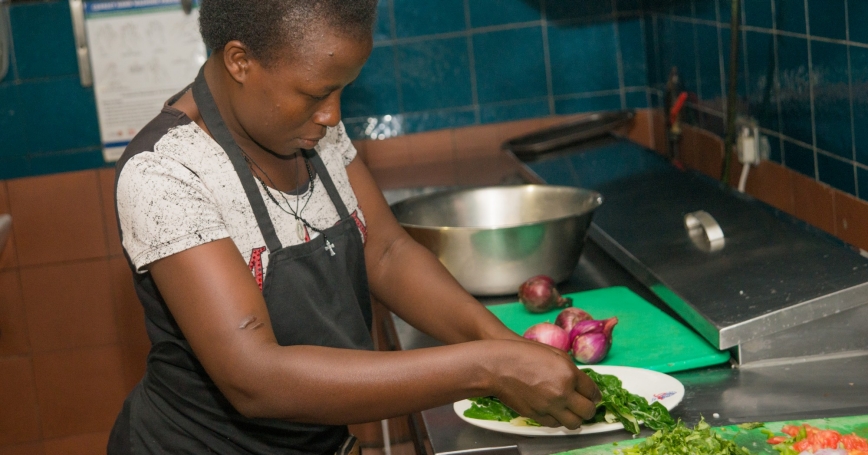 Photo by Saladin Media for the Pardee Initiative

by Michele Abbott and Deborah A. Cohen

As Uganda undergoes a period of rapid urbanization (expected to increase from 13% in 2010 to 60% by 2040 [PDF]), the number of people eating meals outside the home is also on the rise. Most urbanites seem to be looking for food that is convenient and affordable, and Kampala's growing street food industry delivers. Food processing and sales account for more than 30% of the informal market and provides economic opportunity for the poor or marginalized in urban centers, especially women. The Food and Agricultural Organization of the United Nations has recommended (PDF) street food enterprises as a good way to diversify household income with little capital investment, highlighting how small enterprises can continue to grow over time. But what about households who rely on sales as their only form of income? More often than not, food vendors get trapped living day-to-day, and are unable to further develop their enterprises.

Street food vendors typically cater to lower-income, price-sensitive consumers and need to keep prices low to compete successfully in the marketplace. In addition, a fair amount of their income must be used to purchase ingredients for the next day's food offerings. After paying their daily living expenses, too many street vendors don't have sufficient capital to maximize their sales and profits.

The Pardee RAND Graduate School recently teamed up with the African Center for Economic Transformation on a project promoting highly nutritious, drought-tolerant native grains—millet and sorghum—in Uganda, culminating in a “Superfood Cook-off Competition” finale that paired professional chefs with local vendors to create nutritious and affordable street foods using these sustainable grains. After the event, we interviewed the participating street vendors to find out more about their business goals and the obstacles they face.

Consta Adong, 40, from Lira, Uganda is single and has no children. She operates a vending booth at the Nakawa Market in Kampala and sells traditional food from the region where she was born. Adong had been able to save enough money to rent a market stall and buy a cooking stove to prepare larger meals. However, she usually runs out of food before she runs out of customers. After selling about 50 plates per day, earning the equivalent of $32 to $44, and paying her helpers, she only has enough left to buy ingredients for another 50 plates of food the next day. Adong says she believes there is demand for at least 100 plates of food per day but without credit, she cannot afford the ingredients to meet that demand and must forego the potential profits.

Milly Sebuliba, a 45-year-old mother of six children, has been operating a vending booth in Nakasero Market for over 10 years. Sebuliba typically sells about 40 plates per day, and has at least 10 to 15 clients looking to buy food after she has run out. She rents space at the market, but because she cannot afford the license fees to cover a one-year period, she pays a higher rate to rent month to month. A long-term license would save her money and provide more stability, according to Sebuliba. She says an infusion of the equivalent of about $150 into her business would give her ample capital to secure her position in the market and allow her to purchase more supplies. Sebuliba estimates she could pay it back in six months.

Another street vendor said he sees opening a restaurant as an opportunity to make a better income. Asiimwe Nicholas, 30, completed a college degree in hotel management and has a wife and a baby. In the street food business for three years, he targets university students with items such as chips (French fries), roasted chicken, and sausages. He estimates that a loan of about $2,650 in U.S. dollars would allow him to open a brick-and-mortar establishment and that it would take him between 18 months and three years to repay the loan.

The street food vendors all appeared to be hardworking and enthusiastic. But their reality is stark—many are one family or health crisis away from losing everything. In Kampala, selling food on the street is technically illegal, and the Kampala City Council Authority intermittently cracks down on local vendors. However, many of the sanctioned markets are already full, and renting a space costs money. Micro-loans could potentially help move these vendors up the economic ladder, but a broader social safety net in addition to a small influx of capital is needed. Improved vendor registration, regulations regarding the cost of renting market booths, and the provision of safe and energy-efficient cooking equipment could improve the economic stability of vendor households.

Street vendors would greatly benefit from the development of an appropriate infrastructure in tandem with food safety standards, rules of hygiene, and an increased focus on healthful products. Kampala's growing population also would benefit from receiving increased access to nutritious and affordable foods.

Michele Abbott is an assistant policy researcher at the nonprofit, nonpartisan RAND Corporation and a Ph.D. candidate at the Pardee RAND Graduate School. Deborah Cohen is a senior scientist at the RAND Corporation. This blog post was written for the Pardee Initiative for Global Human Progress.