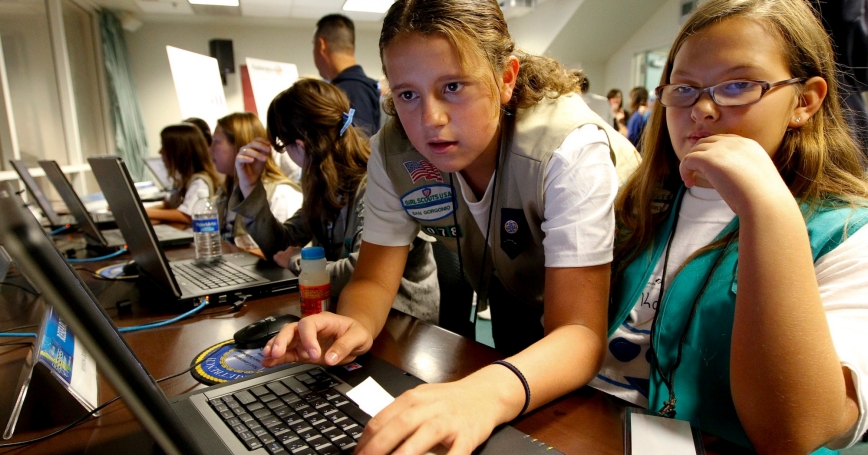 My association with the Girl Scouts has spanned decades — as a scout, camp counselor, steadfast cookie connoisseur and now donor. It is an experience strongly associated with the great outdoors. Cook meals on a campfire? Check. Hike long distances wearing a heavy backpack? Check. Lead two dozen 5-year-olds for a week in a woodland camp? Check. In adulthood, all of those experiences stayed with me, and I put them to use in the wilderness and in my work as a cybersecurity researcher for the RAND Corporation.

Scouting has always given girls opportunities that challenge them and allow their leadership skills to develop. But the modern world — with its headlines about Russians hacking our elections and disruptive prank email impersonations of White House staffers — can seem far removed from a Girl Scout camp. So imagine my delight when the Girl Scouts announced they would be offering 18 cybersecurity badges to expose girls to information-age concepts and challenges.

This heartening development is more than just an indication of changing times, more than just updating badge programs to replace the outmoded with the modern. This is a way for more girls to obtain valuable hands-on experience with the concepts that are shaping the modern world. The service ethos Girl Scouts have always embodied and championed can now “go viral,” as up to 1.8 million girls are given the chance to learn to protect themselves and their community in cyberspace.

Just by offering these cybersecurity badges, the Girl Scouts are breaking down a barrier. It's no secret that women are underrepresented in career fields (PDF) like information technology, computer science, and cybersecurity. Every year since 1982, more women than men have earned college degrees. But women are less likely than men to pursue degrees in the technical disciplines that often lead to cyber careers — think information technology, information security, computer science, mathematics, or electrical and computer engineering.

If the Girl Scouts employ their typical philosophy that emphasizes learning by doing — and cultivating leadership skills to detect and solve problems — girls will be able to identify with cyberspace as a place they, their families, and the greater world spend so much time. Girl Scouts will undoubtedly recognize and grapple with the fundamental tensions between privacy and security, the societal inequities in access to information, and the cat-and-mouse game between those who will misuse cyberspace and those who try to defend it.

Girls and young women need to be able to see themselves in the role of white-hat hackers to truly even the virtual playing field.

But it's not just about exposing them to cyber concepts like strong encryption and probing networks to find security flaws. Girls and young women need to be able to see themselves in the role of white-hat hackers to truly even the virtual playing field.

While preparing to give a seminar to encourage girls to pursue cybersecurity or other careers in STEM (science, technology, engineering and math), I stumbled upon some eye-opening artwork by seventh-graders on the website of the Fermi National Accelerator Laboratory near Chicago. The students had been asked to draw a picture of a scientist before meeting with the laboratory's scientists (particle physicists, no less). The drawings embodied the classic cliché and were mainly of white men wearing white lab coats, mixing potions in beakers, sometimes with wild hair and a crazed look in their eyes.

After the field trip, the students were once again asked to draw a picture of a scientist. This time, having experienced science firsthand, their pictures represented a more realistic and fully formed version of who can be a scientist. Their drawings of men — and yes, women — showed them wearing “lab chic” street clothes, holding fewer beakers and, for the most part, looking pretty sane.

What sort of a picture would a seventh-grade girl draw of a cybersecurity professional? With the help of the Girl Scouts' cyber initiative, many more girls might depict a future version of themselves in the part.

Lara S. Schmidt, a former Girl Scout, works at the nonprofit, nonpartisan RAND Corporation where she is the director of the Strategy, Policy and Operations Program of the Homeland Security Operational Analysis Center.

This commentary originally appeared on USA Today on August 1, 2017. Commentary gives RAND researchers a platform to convey insights based on their professional expertise and often on their peer-reviewed research and analysis.