Is the Philippines the Next Caliphate? 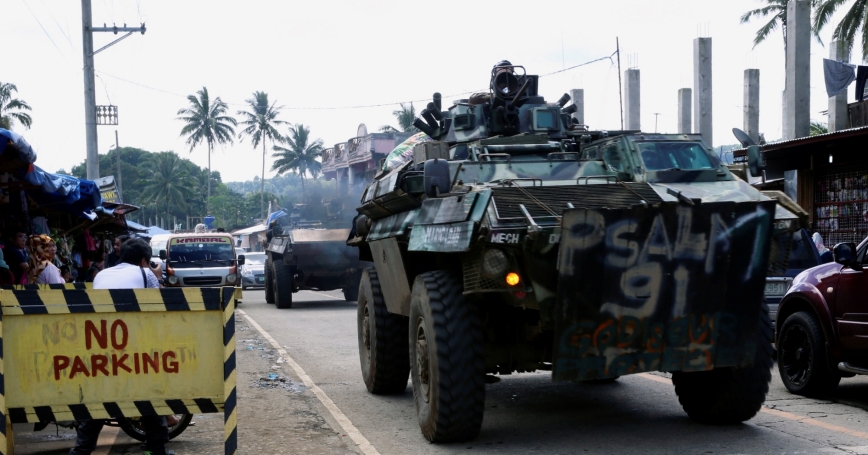 An armored personnel carrier on a highway after President Rodrigo Duterte announced the liberation of Marawi in Lanao Del Sur, Philippines, October 28, 2017

by Patrick B. Johnston and Colin P. Clarke

Both Western leaders and those involved within the region have been eager to declare victory over the Islamic State after retaking the major cities, such as Mosul and Raqqa, that the group has controlled since 2013. But it's too soon to be complacent. The Islamic State is already thinking about how to regroup. The Philippines is a long way from the group's birthplace in the Middle East—but the jihadis have already seized and held a city there for three months, and exerted a grim cost on the country's security forces to retake it.

The Philippines has a long history of Islamic militancy dating back to the 1970s, when the Moro National Liberation Front began battling the government in its quest for greater autonomy from the central government in Manila. After various splits and splintering within the Moro National Liberation Front, the Moro Islamic Liberation Front emerged in 1984 and continued to wage a low-intensity insurgency throughout the southern Philippines. Another Islamic militant organization, the Abu Sayyaf Group, formed in the early 1990s and has formed links with al Qaeda and other Islamic militant groups throughout Southeast Asia, including Jemaah Islamiyah.

Southeast Asian militants also have little battle experience with the Islamic State. The nearly 1,600 South and Southeast Asian foreign fighters who traveled to Iraq and Syria to join the group would have made up just 5 percent of the total number of Islamic State foreign fighters, estimated to be pushing 30,000, according to a report by The Soufan Center, an international consulting company.

And yet, despite receiving far less attention than other Islamic State franchise groups—including in Libya, the Sinai Peninsula, and Afghanistan—Islamist militants who have espoused an affinity for the Islamic State were able to dramatically seize Marawi, the largest city in Mindanao's autonomous region, with a population of 200,000. And even though militants in the Philippines never received official Islamic State wilayat status, there are strong ideological links that have even extended to something more tangible. The combined counteroffensive against the militants failed to recapture Marawi from a loose coalition of these Islamic State-linked factions, including the Abu Sayyaf Group and the Maute group, whose effectiveness was bolstered by Islamic State material support. The core group reportedly sent nearly $2 million to militants in the Philippines to help the group wage battle. The Philippines fits the Islamic State's template of seeking to instigate and latch onto existing ethnic conflicts with sectarian issues, with Muslims from the south competing with Christians from the predominantly Catholic north.

Despite intense assaults and heavy doses of firepower by Philippine security forces, the militants were able to hold the city for more than three months. The feat was even more impressive considering the counterinsurgent force included elite U.S.-trained special operations forces, and—reportedly—U.S. forces that operated quietly alongside them on the ground.

The situation on the ground in the southern Philippines is uncertain today. Philippine President Rodrigo Duterte proclaimed Marawi “liberated” on Oct. 17, one day after his security forces killed Isnilon Hapilon and Omar Maute, the top two leaders of the jihadis in Marawi. However, looming insecurity and a humanitarian crisis will pose a major challenge to reconstruction efforts in Marawi, and extremism is likely to increase among the population in response to the bloody government counterterror campaign and threaten the peace process between Manila and the Moro Islamic Liberation Front. Meanwhile, experts suspect Duterte might have inflated enemy casualty statistics in order to declare Marawi liberated, making it possible for surviving fighters to return to localities where they enjoyed local support and to regroup for future combat.

Marawi may be a taste of things to come. With its Middle Eastern strongholds destroyed, the Islamic State is likely to become more fragmented and to shift greater attention to new regions, from Southeast Asia to sub-Saharan Africa. The foreign fighters who came to Iraq and Syria from around the world may become the nucleus of expanded movements in their home regions. And with its caliphate gone, the Islamic State may attempt to revisit its strategy of designating official franchise groups in an attempt to give its brand a much-needed refurbishment and boost.

Southeast Asia has long been a hotbed of Islamic extremism and violence. For example, neighboring Indonesia—the world's most populous Muslim country—was the original home of key al Qaeda leaders before the 9/11 attacks. More recently it has seen an uptick of arrests related to terrorist plots by Islamic extremists. Still, the nucleus of jihadis actively fighting in, and possibly returning to, the Philippines and other Southeast Asian countries is relatively small compared to other countries in other regions such as North Africa. Nonetheless, as the core Islamic State unravels, the Philippines is likely to continue to become increasingly useful to the group as a safety valve outside of the Middle East.

The Philippines is likely to remain a ripe target due to its large Muslim population, the presence of pre-existing radical Islamist violent and nonviolent fringe movements, the permissiveness of its formal and informal financial systems, weak local institutions, and a leader in Duterte who is heading an administration that has overseen a crisis in Marawi that has resulted in dozens of civilians killed and hundreds of thousands displaced.

The United States ended this campaign in 2015, and whatever successes it had now are in jeopardy of being short-lived: By early 2017, an Islamic State-linked group had captured and held a major city U.S. special forces had helped defend for over a decade—drawing immediate concern from U.S. policymakers.

Although the U.S. counterterrorism support to liberate Marawi from Islamic State-linked groups demonstrates a willingness to intervene in the Philippines in the event of a crisis, it does little to indicate that the kind of U.S. military support provided to Philippine security forces previously is feasible as a longer-term solution for preventing the Philippines from becoming a safe haven for radical Islamic terrorists. Given the degree to which U.S. forces are already overstretched worldwide, there seems unlikely to be much enthusiasm for a serious commitment to yet another country.

Trump and Duterte dealing on terms that included a longer, more open-ended commitment of troops would be uncharacteristic for either leader. Both have demonstrated a preference for shorter, more decisive actions. This cuts off the possibility of an “indirect” approach that would involve training, equipping, and advising Philippine counterterrorism units as part of a longer-term commitment to help ensure a potential crisis could be stemmed before it could grow to the scale of the one in Marawi. The mass killings undertaken by Philippine security forces, backed by Duterte, under the cover of a “war on drugs” also call into question the form of potential U.S. military support.

Islamic insurgency and terrorist activity are alive and well in the southern Philippines. Before this fight is over, more punches and counterpunches between the Islamists and the regime will surely be thrown.

And although the Duterte administration has claimed it is committed to finishing this fight, the Philippines' history as a major hub for insurgents motivated by radical Islamic ideology demonstrates that quelling the fighting will be far more difficult in practice.

Even if the Philippines fails to mature into a major node in the Islamic State's protean global network, it will likely remain fertile ground for the future recruitment, financing, and propagation of propaganda inspired by or directly supporting the Islamic State and its violent agenda.

This commentary originally appeared on Foreign Policy on November 27, 2017. Commentary gives RAND researchers a platform to convey insights based on their professional expertise and often on their peer-reviewed research and analysis.