How Federal Policy Could Help Water and Wastewater Utilities 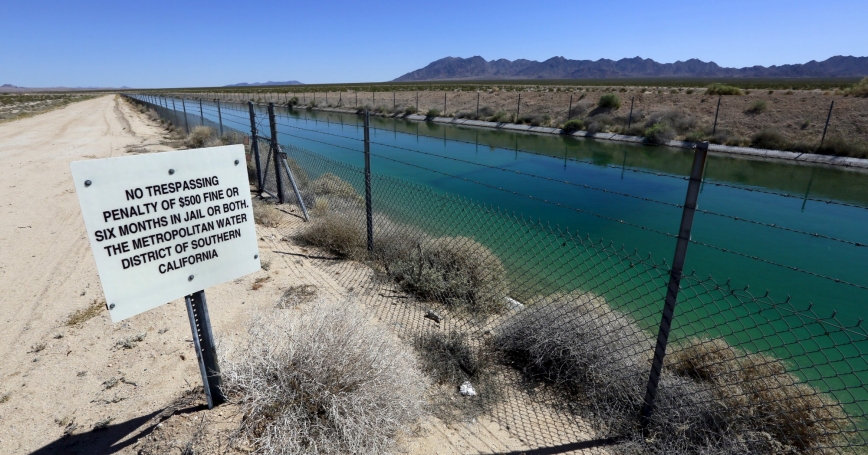 The Colorado Aqueduct near the Iron Mountain Pumping Plant in Earp, California, April 16, 2015

by Debra Knopman and David Catt

President Trump has announced his intent to unveil an infrastructure initiative this month. Although details are lacking, the initiative is expected to include $200 billion of federal spending spread over 10 years, policies intended to leverage $800 billion in new investment by the private sector, more spending by state and local governments, and more deregulation to speed up federal agency approvals for local projects.

The president seems motivated by a perception that America's highways and water, wastewater, airports, energy, rail, and telecommunications systems are falling apart.

Serious problems do exist, but the facts suggest something less than impending disaster. For instance, water and wastewater utilities are just one part of America's infrastructure network, but crafting targeted solutions for this critical sector could help in the development of new funding and management mechanisms for the nation's broader infrastructure needs.

An approach that assumes everything is broken could obscure real financial needs and management problems in some locales.

As described in a recent RAND report, the situation is varied and nuanced for water infrastructure, the vast majority of which is owned and operated by state and local governments. Indeed, state and local governments already account for 94 percent of U.S. spending on capital, operations, and maintenance of water and wastewater utilities. Many of these public owners are doing a good job managing their assets, but many others are struggling. An approach that assumes everything is broken could obscure real financial needs and management problems in some locales.

A better approach might be to devote scarce resources to fixing what actually isn't working well in the nation's approach to managing, funding, and financing infrastructure.

As with any viable business, a water utility's revenues must at least cover costs. Revenues typically come from charges to customers via rates approved through some public review process, but can also come from land, property, and other assessments and taxes. When armed with good governance arrangements and strong financial management, water utilities in metropolitan areas generally do well, although they still are challenged by the costly need to replace century-old pipes. However, trends in demographics and socioeconomic conditions are stressing the utility business model elsewhere.

Cities with growing low-income communities and a shrinking middle class have smaller populations across which to spread the large fixed costs of water and wastewater utilities. Communities with stagnating or declining economic conditions are particularly sensitive—and resistant—to increases in water rates, which have already on average been outpacing inflation by a factor of three since 2000.

And all communities struggle to overcome the short-term political incentives for elected officials to keep rates low. In these places, undercharging leads to a downward spiral of deferred maintenance, under-investment in new capital, and corner-cutting of services wherever possible. Unfortunately, deferred maintenance almost always leads to even more costly repairs down the line.

Rural communities are even more challenged by high per-capita costs of operating water and wastewater utilities that are compliant with state and federal regulatory standards. An analysis of North Carolina water and wastewater utilities from 2008 to 2016 found that utilities serving populations under 1,000 were much more likely to run multi-year deficits than utilities serving populations in excess of 10,000 due to their reluctance to raise rates.

How could federal policy change this equation, and should Congress and the administration even try? The scant details of the Trump administration's plan to provide funding to communities that generate new revenue streams for their own infrastructure projects is unlikely to lead to new federal spending in economically distressed regions.

In contrast, a more targeted approach could directly address the need for innovation, higher efficiency in utilities, and boost the prospects of these communities. Federal incentives could stimulate the development of innovative water and wastewater systems that can be fully compliant with environmental and public health standards at significantly less cost than current technologies provide.

One thing Congress could do is significantly increase its funding of the new Water Infrastructure Finance and Innovation Act (WIFIA) program, EPA's existing State Revolving Fund programs, and the USDA's Water and Environmental Programs for small rural communities to provide more low-cost financing and loan guarantees to communities in need.

According to the Congressional Budget Office, $20 million in budget authority under WIFIA could support up to $200 million in loans. To speed the innovation process, the government could create prizes for development of smaller-scale water technologies or a competitive grant program that incentivizes corporate and venture capital investment in technologies that reduce costs.

Utility-administered rate assistance lifeline programs for low-income customers, perhaps supported through the WIFIA mechanism, could be contingent upon utilities meeting certain criteria about operating expenses, asset management planning, or other business conditions and nudge utilities toward either consolidation or another more efficient and innovative business model. Greater assurance of their poorest consumer's ability to afford water rates could spur utilities to make needed investments in infrastructure improvements.

By taking a more targeted approach … the federal government could address the root causes of infrastructure problems more effectively.

By taking a more targeted approach in the water and wastewater utility sector, the federal government could address the root causes of infrastructure problems more effectively than a spending initiative that simply spreads money around with the hope that more spending might do some good. The same could be said for other areas, including transportation infrastructure.

Yet other infrastructure sectors, such as energy, freight rail, and telecommunications systems may need less attention. Largely in private hands and managed through their pricing structures to maintain and invest in their systems, these are profitable businesses with ample access to capital, incentives to innovate and competency in managing their assets.

The coming debate over national infrastructure policy will inevitably focus on dollar amounts, but the real debate ought to be on priorities and tailored approaches to problem solving. There is an abundance of capital available for investment in U.S. infrastructure. Good policy could unlock the capital and drive it toward reliable, clean, efficient, and cost-effective systems in communities of all sizes.

This commentary originally appeared on Inside Sources on January 15, 2018. Commentary gives RAND researchers a platform to convey insights based on their professional expertise and often on their peer-reviewed research and analysis.