How the U.S. Can Help Resolve the Rohingya Crisis 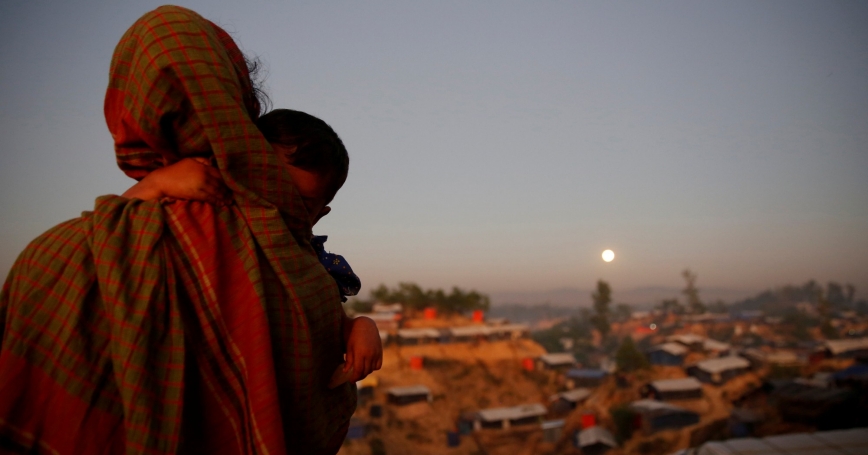 A Rohingya refugee looks at the moon with a child in tow at Balukhali refugee camp, Bangladesh, December 3, 2017

by Jonah Blank and Shelly Culbertson

Since August, an estimated 650,000 Rohingyas, out of a population of a million, have fled from Myanmar to neighboring Bangladesh to escape a campaign of arson, rape, and murder believed to have been orchestrated by the Myanmar military. In late November, the government of Myanmar agreed to let these refugees return—although not to their homes, and at a pace that could drag out the process for a generation. Even if this offer was honored—and there is plenty of reason for skepticism—it would hardly be cause for celebration: Myanmar does not seem to have made any genuine commitment to address the causes of the flight, which U.S. Secretary of State Rex Tillerson has described as “ethnic cleansing.”

The world community, and particularly the United States, should consider taking a twofold approach. It could use its leverage to make the November agreement a true turning point for the safe and voluntary return of the Rohingya to their homes in Myanmar and at the same time invest in helping Bangladesh cope with the many Rohingya who are likely to remain in Bangladesh.

The government of Myanmar (also called Burma) recognizes over 100 ethnic minority groups—but not the Rohingya. The term “Rohingya” generally refers to Muslim communities in Myanmar's coastal region of Rakhine, people whom the government classifies as “Bengali” in reference to their traditional ties of ethnicity and culture with the land that is now Bangladesh. Although many (perhaps most) Rohingya families have lived in their villages for longer than the modern nation has existed, they are officially considered migrant foreigners and lack citizenship rights.

Driven by a congruence of interests between the military, civilian leaders including Nobel Peace Prize laureate Aung San Suu Kyi, and a faction of the Buddhist clergy, persecution of the Rohingya has escalated over the past two years. As UN High Commissioner for Human Rights Zeid Raad al-Hussein put it, “The devastating cruelty to which these Rohingya children have been subjected is unbearable.” He noted a case in which a soldier “stab[bed] a baby crying out for his mother's milk” as his mother was gang-raped “by the very security forces who should be protecting her.”

Without addressing either the deprivation of basic rights of citizenship or the violence that prompted the Rohingya to flee in the first place, the promise of return will not create a durable solution for the crisis. Given the role of security forces and politicians in carrying out the mass violence that spurred the refugees' flight, the government of Myanmar's commitment must be viewed with apprehension; indeed, on December 12, 2017, the government arrested two Reuters reporters covering Rakhine State. With many of their villages burned, returning Rohingya refugees may expect to remain housed indefinitely in squalid camps, which could then turn into de facto detention centers.

By accepting responsibility for reintegrating the Rohingya, Myanmar has given the world a chance to hold it to its promise.

A durable solution for the Rohingya in Myanmar depends on their ability to return home without having to face state-sanctioned violence and ensuring their protection under the rule of law. It also requires rebuilding their communities, with assistance from international humanitarian aid workers, and meaningful efforts at reconciliation among the various ethnicities in Rakhine and other states. The United Nations and the government of Myanmar have formed a commission to address some of these issues. But given that the Myanmar government is itself the perpetrator or facilitator of these egregious human rights violations, resolving this situation will be neither easy nor guaranteed. At the same time, a significant proportion of the Rohingya, having lived through the recent atrocities, may resist the calls to return to Myanmar and choose to stay in Bangladesh instead. It would be a violation of international norms if their returns were involuntary. But by accepting responsibility for reintegrating the Rohingya back home, Myanmar has given the world community the chance to hold the country to its promise.

The United States is the most important player here. During the administration of U.S. President Barack Obama, Washington led the international community in welcoming Myanmar out of a self-imposed exile that had lasted since a military coup in 1962. In 2012, after Myanmar's first free election in over 20 years, Obama restored diplomatic relations and sealed the new relationship with a personal visit; in 2016, he dropped most remaining U.S. sanctions. Perhaps the United States moved too quickly—but it should consider making clear to Myanmar's leadership that this move is not irreversible. The leverage that helped push the Myanmar military to accept limited democratization—the United States' pivotal role in either facilitating or complicating Myanmar's entry into the global economic order—is still available for use. The sanctions on trade and investment, which Obama eliminated by executive order, could be reimposed: some by presidential action alone, others with the cooperation of Congress; sanctions on individuals within the Myanmar military and civilian leadership could be greatly expanded; while the United States is not itself a supplier of military hardware to Myanmar, it could press its security partners (including Israel, India, France, and Germany, all of which have sold arms to Myanmar in the past decade) to shut down cooperation. Some analysts argue that China remains Myanmar's largest investor and security partner and that Beijing would gladly serve as Myanmar's international sponsor without any consideration of human rights. This is true—but it was also true before the Saffron Revolution of 2007, which set the wheels of democratization in motion. Myanmar's leaders, and more importantly, the country's population, have already proven that they do not want to remain pawns of China.

U.S. demands on Myanmar—backed up by key players including the European Union, India, Japan, and South Korea—should be focused not merely on accepting the Rohingya back but on granting them the safety and citizenship rights enjoyed by all other ethnic minorities. The alternative is creation of a million-strong population of stateless people: whether living in refugee camps in Bangladesh or in Myanmar, they would likely become a breeding ground for extremism and instability.

The examples of multigenerational camps for Afghan, Palestinian, Somali, and other refugee communities demonstrate the perils of such an approach. History shows that negotiations to resolve such conflicts are frequently drawn out for decades. The United Nations has found that on average 17 years pass before people displaced as refugees return home. Refugees often spend their whole lives in limbo, while a durable solution always seems just around the corner.

Expecting the Rohingya to remain in the camps creates both human rights and security risks.

In Bangladesh, the Rohingya would add 650,000 people to a nation of 163 million already struggling with the development, employment, infrastructure, and public service needs that far exceed its overtaxed resources. Its cities are overcrowded, and its public services and environment are already strained beyond the breaking point. Bangladesh is forced to export workers to Saudi Arabia, the United Arab Emirates, and any other nation where employment is available.

Our RAND study on prolonged refugee situations in the Middle East found that humanitarian responses run by the international aid community for large displaced populations are insufficient in situations of medium- or long-term displacement. Expecting the Rohingya to remain in the camps creates both human rights and security risks, and assistance will be needed to help Bangladesh manage public services (including education and health care) for the new population. When populations remain displaced for lengthy periods of time, we found that aid should shift to enabling the host country to provide public services and to expand job opportunities. While pressing Myanmar to assure the safe return of the Rohingya to their villages, the world community could simultaneously help Bangladesh integrate the thousands (perhaps hundreds of thousands) who may not be able to return to their place of origin.

A pragmatic multipronged approach is needed here, one that involves brokering a political solution, creating conditions in Myanmar that can help the Rohingya return home, and helping Bangladesh cope with the presence of what is likely to be a new long-term population. If the United States wants this to happen, it could place its full weight behind these approaches.

After the 1994 genocide against the Tutsi in Rwanda, the world community said, “Never again.” After the 1992–95 ethnic cleansing campaign in the former Yugoslav republics of Bosnia and Serbia, and another one between 2003 and 2010 in the Darfur region of Sudan, the world repeated its pledge. Today, up to a million Rohingya are waiting to see whether these promises have meaning. A few weeks ago, the government of Myanmar provided an opening to prevent another epic tragedy. May the United States, and the world, take advantage of it.

This commentary originally appeared on Foreign Affairs on January 4, 2018. Commentary gives RAND researchers a platform to convey insights based on their professional expertise and often on their peer-reviewed research and analysis.