Pursuing the Extraordinary Through Space Exploration 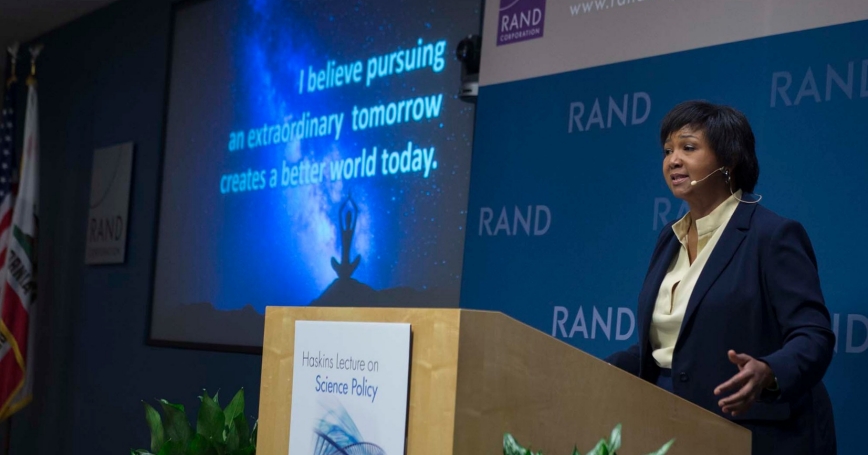 When it comes to space exploration, what constitutes the “pursuit of the extraordinary?” Is it exploring and colonizing Mars? No, said NASA astronaut Dr. Mae C. Jemison, Mars is not an “audacious” enough goal. We should be pursuing interstellar travel—shooting for another star—Jemison said in a lecture on Jan. 23 at the nonprofit RAND Corporation in Santa Monica, California.

Jemison, who made history in 1992 as the first woman of color to go into space, delivered RAND's 11th Haskins Lecture on Science Policy. The endowed lecture series supports visits to RAND by prominent scientists and scientific entrepreneurs. Jemison's talk focused on the vital role science plays in our lives—from the technology that powers our smart phones to the algorithms used for medical imaging—and the importance of continued investment in research and technology.

The way we move ahead is by doing bold things.

“The way we move ahead is by doing bold things,” said Jemison, who leads 100 Year Starship, a nonprofit initiative devoted to making human interstellar flight possible within the next 100 years. Society continues to benefit from the commitment made to science research and space exploration decades ago, she said. One example she gave of this was DNA sequencing performed in the 1950s and 1960s that enabled science's current biotechnology capabilities.

Even though the U.S. is a prosperous nation in a prosperous time, Jemison cited diminishing public funding for new research and a focus on short-term gains and profits as barriers to achieving significant scientific advances in the future. “The challenge of human interstellar travel mirrors the challenges that we face in the world today,” she said. “Space isn't just for rocket scientists and billionaires.”

According to Jemison, a shared national pursuit aimed at tackling something the country as a whole does not know how to do would push technology forward. To support human interstellar travel, society needs to begin to figure out how to generate the energy and speed needed to travel the tremendous distance. Ways need to be found to keep people healthy during the enormous amount of time travel would take. For example, medicine packed for the journey would expire during the trip. Radical leaps and bounds in science and technology are needed to achieve this interstellar travel goal, Jemison said.

In the quest to put a man on the moon, other scientific discoveries were made that benefited humanity, she said. The same outside-the-box thinking needed now to achieve human interstellar flight in the next 100 years will enhance life on Earth and reap benefits now and in the future, Jemison pointed out. “I believe pursuing an extraordinary tomorrow creates a better world today,” she said.

The Haskins Lecture on Science Policy was established at RAND through the generosity of Caryl P. and Edna Haskins, the founders of Haskins Laboratories who were dedicated to improving the nation's understanding of the relationship between scientific progress and sound public policy. Caryl Haskins was a member of the RAND Board of Trustees for 20 years.