If We Don't Get the Peace Right, Iraq Will Slide Back into the Morass 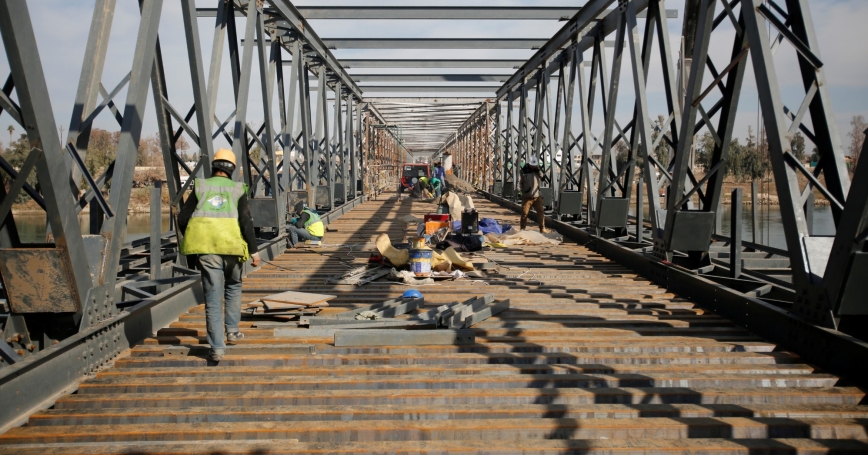 by Linda Robinson and Shelly Culbertson

With Iraq's cities now liberated from ISIS, returning to some semblance of normalcy is now the country's most urgent task.

Iraqi civilians need to believe that their situation in the future will be better than the difficult times under ISIS.

Visiting Iraq recently, we heard story after story about the hurdles to getting Iraq's cities back up and running after the battles with ISIS.

United Nations Mine Action Service (UNMAS) workers described how they just blew up 12,000 bombs and suicide belts left behind by ISIS in Mosul's Shifa Hospital, a former ISIS headquarters that is thoroughly laced with explosives. A United Nations engineer laid out the tedious work of restoring Mosul's power stations and electrical grid; since steps must be done in sequence, it will take a year to fully restore power to the city.

Jassim Mohammed al-Jaaf, Iraq's minister of migration and displacement, spoke of the challenges faced by the 2.6 million Iraqis who remain displaced from their homes, driven from war-ravaged cities like Mosul and the surrounding Ninewa Province.

“The priority now,” he says, “is to bring back normal life to Iraq's cities so that people can return home—or choose to stay in a new city.” As a former displaced person himself, al-Jaaf understands the magnitude of the challenge as well as the human toll.

This week will tell a lot. That's when government and business leaders from around the world, including Secretary of State Rex Tillerson and representatives from over 100 U.S. companies, will assemble in Kuwait to plan solutions to Iraq's recovery challenges as well as investments in its economic future.

The turnout and aid pledges could indicate whether the international community is prepared to keep Iraq moving on what at last could be a hopeful trajectory, and whether the Iraqi government is prepared to take the steps needed to make the most of this opportunity.

Of the 2.6 million Iraqis who remain displaced (of 5.7 million displaced since the beginning of the conflict in 2014), 1.6 million are from Ninewa Province. These remaining displaced Iraqis need to be able to go home if they choose to, and, more immediately, provisions must be made for them to vote.

The effort to register the displaced, mostly Sunni, Iraqis to be able to vote in May elections will be critical as a sign of their political incorporation post-ISIS.

The effort to register all these displaced, mostly Sunni, Iraqis to be able to vote in May elections will be critical as a sign of their political incorporation post-ISIS. Progress on this front is minimal to date, and Iraq's electoral commission will need to move faster.

The UNMAS workers who are leading the efforts to clear Mosul and other cities of massive amounts of explosive material find more improvised explosive devices and bodies the deeper they dig into West Mosul's rubble.

ISIS systematically mined public buildings, utilities, schools, hospitals, and houses as a tactic to prevent civilians from returning; there is also a lot of unexploded coalition ordnance. The frontline clearance personnel say this is the most heavily contaminated site they have encountered anywhere in the world; over 90 percent of the public buildings that they have assessed are booby-trapped with a least one mine and usually more.

Desperate to return home, many Iraqis are braving the dangers and paying the price. UN officials say to tackle the enormity of the task they need more financial resources from the international community, specialized equipment, and resolution of liability issues.

Sixteen of Mosul's neighborhoods were completely destroyed, with extensive damage elsewhere. While some damage was from ISIS, much was by coalition bombing that crumbled buildings and ruined the electrical super grid and water pipes through explosive vibrations.

The United Nations Development Program, in charge of stabilization, has 1,600 restoration projects underway in Mosul and across Iraq, and the World Bank and others also have assistance projects. But we learned that private sector investors are hesitant to commit to additional longer-term projects without needed Iraqi initiatives to improve financial transparency.

A critical obstacle to people returning to their homes is fear of reprisals from security services, militias or their neighbors who allege they supported ISIS.

Aid workers report that a critical obstacle to people returning to their homes is fear of reprisals from security services, militias or their neighbors who allege they supported ISIS.

Yet, there has been little international assistance to date at local reconciliation efforts; one UN official we talked with estimated that local dialogues in Mosul would cost $2 million, and another Western official estimated that this could be done for $10 million for all of the affected parts of Iraq.

The Iraqis are immensely proud of the military victory against ISIS, but Sunnis are concerned about the Shia-dominated militias and the Federal Police that are still present as security forces in the liberated areas.

The Iraqi government did listen to their concerns, and ordered the Federal Police out of West Mosul. They are being replaced with Iraqi army forces under the command of Ninewa native Major General Najm al-Jabouri.

Now the residents of Ninewa plains to the east of Mosul should be listened to as well, as they are asking for the Popular Mobilization Forces to be moved out of their areas.

We realize that there is “Iraq fatigue” in all quarters of Washington. But steps taken now by the U.S., the government of Iraq and private parties could well determine Iraq's future.

The message the Sunnis receive in these next six months (whether or not they get help in rebuilding their lives after warfare) will determine whether Iraq is on the path to stability.

Linda Robinson and Shelly Culbertson are both senior policy researchers at the nonprofit, nonpartisan RAND Corporation, and co-authored Making Victory Count After Defeating ISIS: Stabilization Challenges in Mosul and Beyond (RAND, 2017). Robinson is the author of Tell Me How This Ends: David Petraeus and the Search for A Way Out of Iraq (Public Affairs, 2008). Culbertson is the author of The Fires of Spring: A Post-Arab Spring Journey Through the Turbulent New Middle East (St. Martins, 2016).

This commentary originally appeared on Newsweek on February 11, 2018. Commentary gives RAND researchers a platform to convey insights based on their professional expertise and often on their peer-reviewed research and analysis.