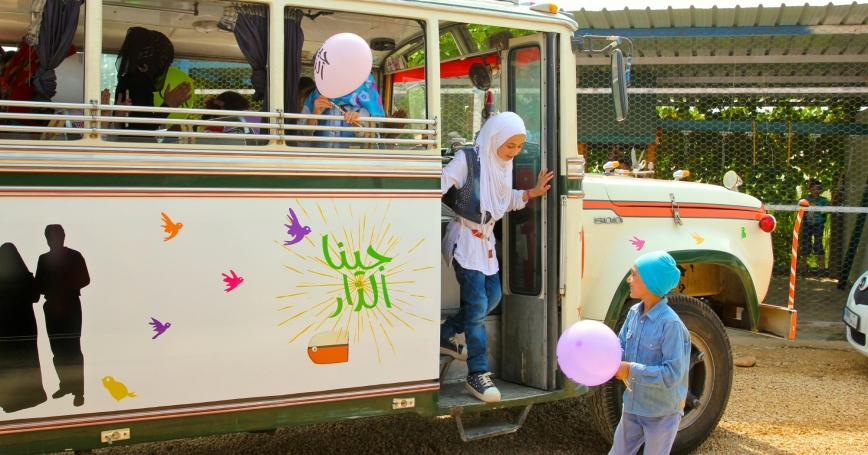 As the crisis in Syria enters its eighth year, more than 58 percent of the nation's refugees in neighboring Lebanon live in extreme poverty, unable to meet basic survival needs. More than 70 percent of refugees older than 14—surveyed (PDF) in a representative sample of registered Syrian refugee households in Lebanon—said they lacked legal residency in their country of temporary residence.

This has hampered refugees' access to work, health care, and schooling for their children. The lack of official documentation has also made children more vulnerable to child labor and child marriages. They also are more subject to abuse, with 78 percent of children younger than 18 experiencing violent discipline, including physical and psychological abuse, according to the survey.

The Syrian conflict has led to major shifts in traditional gender roles for refugees. Refugee men can't be their family's provider and protector. Refugee women and girls no longer have access to family resources and social services they had in Syria. Instead, a 2017 United Nations survey (PDF) found that almost 19 percent of households were headed by women, who have become breadwinners for their families.

But these households also experience higher food insecurity. Their members were less likely to have legal residency and were twice as likely as households headed by males to be situated in informal settlements.

For the Syrian refugees, the reversed gender roles in their families and their increasing poverty has only worsened interpersonal tensions and increased the risk of domestic violence. More than 70 percent of reported domestic violence incidents (PDF) are perpetrated by family members, and only one-third of survivors seek help.

Roula Masri, who directs gender equality programs at ABAAD, a nonprofit group that works to achieve gender equality in the Middle East and North African region, said in an interview that Syrian refugees in Lebanon keep experiencing high levels of interpersonal violence.

In the last two years, aid groups have offered refugee women greater information about services to prevent and deal with domestic violence. But Masri said that knowledge isn't translating into refugee women using services, for various reasons that include violence possibly becoming a norm in some displaced communities.

This has challenged organizations like ABAAD, which sometimes encounters community resistance to its efforts to deliver assistance services to Syrian refugees. This led the response team to reconsider its approach and address issues holistically: The goal now is to provide services but also address community attitudes toward gender-based violence by involving men as well as religious leaders in all of the organization's activities. Most refugee communities consider it critical to preserve the family unit. This view needs to be respected by outside service-providers as they offer prospective solutions for women. Aid groups also need to engage all members of the family, especially because women experiencing violence might be unwilling to leave the family unit.

Community-based interventions have been identified as key to helping refugees prevent sexual- and gender-based violence and child abuse. In late 2016, ABAAD introduced the “Jina Al-Dar” project. The program features a touring mobile bus that has traveled to some of Lebanon's hardest-to-reach areas where the most refugees live.

The mobile outreach seeks to provide a range of services, including legal and health information, and educational activities involving the entire community, including non-refugee locals. The bus is parked in spots for up to four days, with ABAAD workers conducting activities tailored to each site. They have tackled issues related to child marriage and domestic violence through puppet shows, interactive theater, and other performances.

More than 2,000 women and 912 men participated in evenings aimed to increase social cohesion. The participants included 57 percent Syrian refugees, more than half of whom also benefited from legal, health, and educational sessions. More than 2,000 children participated in focused, psychosocial support activities on gender-based violence as well as other efforts to protect the young.

The response from the community has been positive in general. “Engaging the community has given us better access to the women we are trying to reach” Masri explained. “Once they have a better understanding of what our message is, and how it can benefit the entire family, they facilitate women's access to the services we provide.”

Behavior changes on gender and social norms likely will be crucial to help prevent violence against women and children—but these long-term solutions will require time and resources.

For now, further insights on interventions that may be helpful for Syrian refugees may come from a recent evaluation (PDF) of a program that deals with gender-based violence in the Dadaab refugee camps in Kenya.

Researchers from the London School of Hygiene and Tropical Medicine and the African Population and Health Research Centre found that programs that tapped workers from the refugee community had high potential to reach vulnerable women and provide needed support to improve women's health and safety. This model may be worth emulating in terms of using community workers and ensuring many of them are women—and in giving these valuable staffers an ownership in the delivery of gender-based services.

As the world confronts complex, enduring humanitarian crises like those in Syria, policymakers and funders would do well to look for evidence-based, novel, and effective ways including recruiting and training workers from affected communities to help with implementing programs.

Mahlet Woldetsadik is an assistant policy researcher at the nonprofit, nonpartisan RAND Corporation and a Ph.D. candidate at the Pardee RAND Graduate School. This blog post was written for the Pardee Initiative for Global Human Progress.