Terrorism on Trial: The Problem of Prosecuting International Jihadists 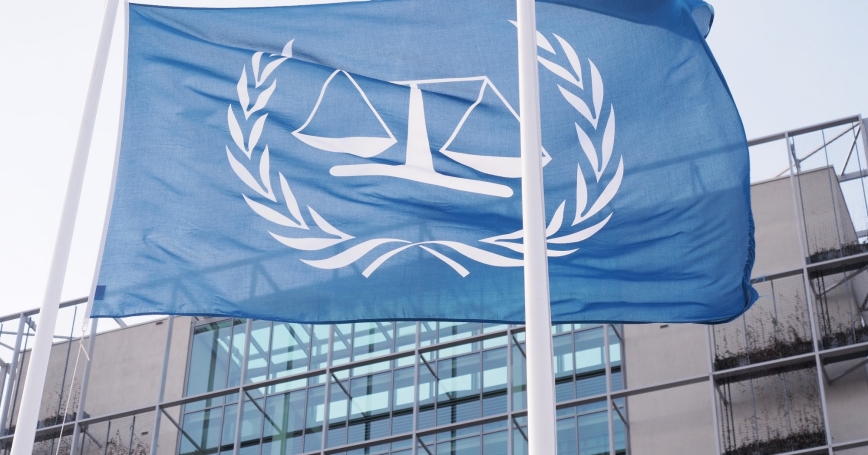 The flag outside the International Criminal Court in The Hague, Netherlands

In January, Syrian Kurdish fighters arrested two prominent Islamic State combatants. Their capture raised a complex question: Where should the British nationals, who were part of an infamous ISIL terrorist cell known as “The Beatles,” be tried?

In an interconnected world, with an increasing number of fragile states, the International Criminal Court (ICC) may be the most ideal institution to try these accused terrorists. The court would ensure that the legal status of terrorists, the nationalities of their victims, and the location of the crimes are taken into account — all while upholding the core values of Western democracies.

The jihadists, Alexander Kotey and El Shafee Elsheikh, are accused of murdering 27 hostages. Understandably, the victims' families want to bring these terrorists to justice as quickly as possible. However, deciding where the pair should be prosecuted is complicated by a number of factors — including that they allegedly committed crimes in the unstable states of Iraq and Syria; their victims' nationalities, who originated from the U.S., UK, and France; and their own British backgrounds.

Various officials have suggested a variety of possible paths to prosecuting these two terrorists. Since the well-publicized execution of American hostages, including journalists James Foley and Steven Sotloff, influential figures in the US government have advocated for prosecuting ISIL jihadists in the United States. These authorities include Attorney General Jeff Sessions and Thomas Bosert, President Trump's Chief Counterterrorism Adviser. Sessions and Bosert have also advocated for the continued use of Guantanamo Bay to incarcerate ISIL terrorist suspects. In 2017, The Trump Administration detailed their plans in a document that advocated sending ISIL detainees to Guantanamo. President Trump has repeatedly said that he prefers to send terrorist suspects, including US citizens, to Guantanamo Bay. Trump stated, regarding terrorism prosecutions, “We need quick justice, much quicker and stronger than we have right now.”

The UK, however, opposes transferring terrorist suspects to Guantanamo Bay. Between 2005 and 2015, the UK repatriated nine British citizens sent to the US prison. London is wary of the negative global reputation of the facility, which has been dogged by allegations of detainee abuse that still persist to the present day.

There is widespread belief that holding terrorist suspects without trial at Guantanamo, and the allegations of ill-treatment of detainees in the prison, have helped fuel the Islamic State's hostility towards the West. Some observers say that imprisoning ISIL suspects in Guantanamo, however heinous their crimes, will only inspire more individuals to join the terrorist group. This phenomenon is illustrated by cases including that of Jamal al-Harith, a British national who was imprisoned in Guantanamo Bay and subsequently joined ISIL, detonating a suicide car bomb in Mosul in 2017. There are numerous examples of ISIL using Guantanamo for propaganda purposes. In March 2015, the group's now-defunct magazine featured an obituary for member Abdur-Rauf Khadim al-Khurasani, stating that he was imprisoned for six and a half years in Guantanamo Bay in “some of the most horrifying conditions.”

The UK government will undoubtedly request a say in where the jihadist pair are prosecuted, given their British nationalities. Yet a potential complication is that London has stripped the two men of their UK citizenship. They are part of a group of 150 suspected jihadists who have had their British citizenship revoked due to their membership in terrorist organizations. Therefore, both of these men are essentially stateless; London is not legally responsible for them. This point is particularly important, as it removes any effective obligation or justification to try the two men in a UK court.

Most, if not all, of the crimes allegedly committed by the two jihadists took place in Iraq and Syria. This raises the question of whether either of these two states should handle the prosecution. It is clearly not feasible to hold a trial in Syria, given that the country remains ravaged by a brutal civil war. In contrast, Iraq has tried many international jihadists. Some human rights activists, however, have criticized Iraq's approach to prosecuting accused ISIL members. A report by Human Rights Watch, entitled “Flawed Justice: Accountability for ISIS crimes in Iraq,” argues that there is no national strategy for prosecuting suspected jihadists. Many Iraqi authorities have prosecuted people just for joining ISIL, rather than for specific crimes. There are also concerns about the screening process for individuals leaving ISIL-controlled areas, with many suspects detained arbitrarily for days.

In an attempt to address these challenges, some members of the UK government have suggested the men be tried at the ICC in The Hague. UK Defence Minister Tobias Ellwood has argued this court would uphold the rule of the law — a process that was not followed by prosecutors of the 9/11 terrorist suspects. The court is an intergovernmental institution; its commitment to transparency solves many of the complications involved in prosecuting international jihadists. The ICC would allow for an open trial, and prevent the unlawful detention of the jihadis. The court gives prosecutors what may be the fairest chance to secure a conviction, without compromising legal or ethical norms.

Antonia Ward is an analyst in the Defence, Security and Infrastructure team at RAND Europe. Her research interests include counterterrorism, counter violent extremism (CVE), intelligence and cybersecurity.

This commentary originally appeared on Georgetown Security Studies Review on March 9, 2018. Commentary gives RAND researchers a platform to convey insights based on their professional expertise and often on their peer-reviewed research and analysis.