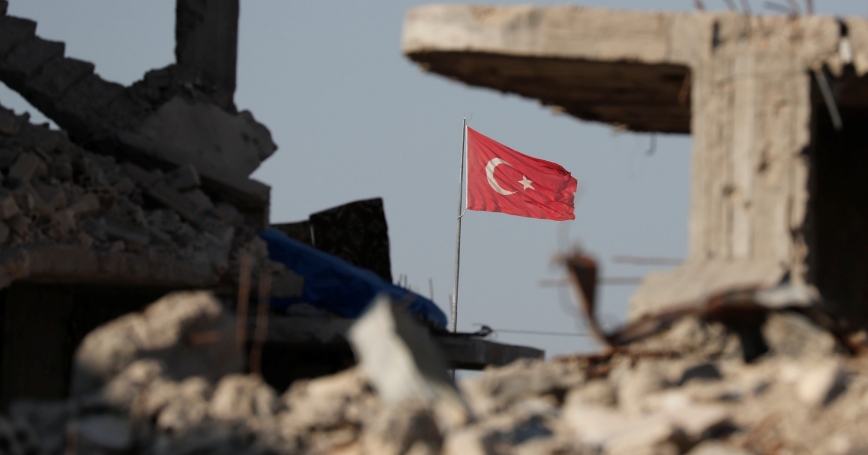 Turkish flag flutters at the Turkey/Syria border, overlooking ruins of buildings destroyed during fighting with the Islamic State militants in Kobani, Syria, October 11, 2017.

The decline of the Islamic State, nearly four years after its emergence, was the result of an aggressive military campaign to combat the group spearheaded primarily by the United States. That has not stopped Turkish Minister of Foreign Affairs Mevlut Cavusoglu from writing an article for Foreign Policy to take credit for the group's demise, insisting that Turkey's actions in northern Syria have helped lay the groundwork for a sustainable peace.

What he neglected to mention is that it was Turkey's actions, or perhaps the lack thereof, that helped fuel the rise of the Islamic State in the first place. The two most commonly cited factors leading to the growth of the Islamic State are the Syrian civil war and the government of former Iraqi Prime Minister Nouri al-Maliki and its persecution of Sunni Arabs in Iraq. But another significant part of this story is the negligence exhibited by the Turkish state.

Beginning in late 2013 and early 2014, Turkish border cities became the chief logistical hubs for foreign fighters seeking to enter Syria and Iraq to join the Islamic State and other rebel groups. By all accounts, foreign fighters from around the globe first traveled to Turkey and then on to Iraq and Syria, forming the backbone and striking power of the Islamic State. In 2013 alone, some 30,000 militants traversed Turkish soil, establishing the so-called jihadi highway, as the country became a conduit for fighters seeking to join the Islamic State. By August 2015, Turkey did eventually tighten up its borders and agree to engage in strike missions as part of Operation Inherent Resolve, but by then, the lion's share of foreign fighters had already arrived in Iraq and Syria.

There are many more examples of Turkey's passive support to Islamic State fighters, including wounded Islamic State militants treated for free at hospitals across southeastern Turkey. Among those receiving care was one of the top deputies of Islamic State chieftain Abu Bakr al-Baghdadi, Ahmet el-H, who was treated in a private hospital in Sanliurfa in August 2014.

There were also widespread reports of Turkish officials, including Turkish President Recep Tayyip Erdogan's son-in-law, were involved in the purchase of Islamic State oil through front companies—actions that undoubtedly helped fill the insurgents' coffers and directly contribute to the group's longevity. Nevertheless, contraband Islamic State oil was consistently sold at points along the Turkish border (PDF) throughout 2014 and into 2015. Fast forward to early 2018, and there are reports that Erdogan has signaled consent for Turkish forces to enlist the help of former Islamic State fighters in Ankara's ongoing battle against the Kurds. And according to Conflict Armament Research (PDF), an organization partly funded by the European Union that identifies and tracks conventional weapons and ammunition in contemporary armed conflicts, Turkey “is the most important choke point” for components used in the manufacture of improvised explosive devices by the Islamic State.

Despite Turkey's claim of being responsible for the demise of the Islamic State, the evidence clearly suggests otherwise. But what about Cavusoglu's assertion that Turkey's intervention in Syria through Operation Olive Branch, a Turkish military offensive in northern Syria aimed at combating Kurdish militants, is merely aimed at correcting America's flaws and stabilizing Syria to the point where post-conflict reconstruction can begin in earnest?

The United States works with the Kurds in Syria because they are the most effective fighting force on the ground, and really the only nonstate actor willing to and capable of fighting the Islamic State. In contrast, the Turkish government has been duplicitous in its objectives, nominally supporting the anti-Islamic State coalition while simultaneously engaging in actions that undermine the same coalition.

Cavusoglu maintains that “the territorial integrity of states” is a prerequisite for peace even as Turkey intervenes in Syria, together with other powerful nation-states, including Iran, Russia, and the United States. Like every nation, Turkey has the right to defend its own borders. But Olive Branch was a preemptive strike against the Syrian Kurds for Turkey's own purposes—it is no secret that Ankara has long harbored ill will against Syrian Democratic Union Party (PYD) Kurds based on their links to the Kurdistan Workers' Party (PKK), a banned Turkish terrorist group, and their admiration for jailed PKK leader Abdullah Ocalan.

The Olive Branch operation is not only about protecting Turkey from terrorism. There's good reason to think it's also an offensive campaign designed to increase Turkey's leverage in future political negotiations in Syria, where it is working with Iran and Russia to minimize American involvement. Turkey continues to seize control of Syrian territory, administering it and installing its own governing structures.

Flanked by Iranian President Hassan Rouhani and Russian President Vladimir Putin, Erdogan appeared at a recent press conference to suggest that Turkey, Iran, and Russia are working toward stabilizing Syria, even as Tehran and Moscow enable Syrian leader Bashar al-Assad, who just last week once again used chemical weapons on his own people in Douma.

Cavusoglu says the Middle East must be “kept safe from the threat of sectarianism, spheres of influence, resurgent imperialisms” and other destabilizing factors. Ironically, it is exactly Turkey's continued incursions into Syria and Erdogan's attempt to portray himself as the savior of all Sunnis, which is reinforcing ethnic divisions by pitting Sunni Arabs against PYD Kurds.

While Turkey may seek to bring an end to the Syrian civil war to resolve a long-simmering conflict on its border, it is also evidently concerned with denying operating space to the PYD, seeking to ensure that Kurdish dreams of autonomy within Syria are dashed. But Erdogan's militancy comes with a price. Already, there is evidence that Turkey has squandered its soft power in the region, as diplomacy and cultural initiatives have been supplanted by military force and belligerence directed at its neighbors.

But if Turkey's goal is truly to finish off the Islamic State, as Cavusoglu suggests, then targeting the People's Protection Units (YPG) is having exactly the opposite effect. With the YPG focused on defending itself from Turkish advances, it is distracted from the ongoing battle to eradicate the last remaining pockets of Islamic State militants from Syria.

For its part, the United States has tried to play both sides of the conflict, signaling support to NATO ally Turkey while continuing to train and equip the YPG in Syria. This has not gone unnoticed in Ankara, where Erdogan recently criticized U.S. President Donald Trump for sending mixed messages on the future American role in Syria following Trump's comments on a possible withdrawal of U.S. troops from the country in the near future.

Washington would be wise to reconsider a hasty withdrawal from Syria, since any premature departure of American troops would almost certainly ensure that the United States has reduced leverage in future negotiations over the end of the conflict in Syria. And it would likely guarantee that the Islamic State would rise again, despite recent claims by Cavusoglu and Turkey that the Islamic State has “largely been militarily defeated.”

Ahmet S. Yayla is an adjunct associate professor at Georgetown University and a former counterterrorism police chief in Turkey. Colin P. Clarke is a political scientist at the nonprofit, nonpartisan RAND Corporation and an associate fellow at the International Centre for Counter-Terrorism in The Hague.

This commentary originally appeared on Foreign Policy on April 12, 2018. Commentary gives RAND researchers a platform to convey insights based on their professional expertise and often on their peer-reviewed research and analysis.