What Does Mission Accomplished in Syria Really Mean? 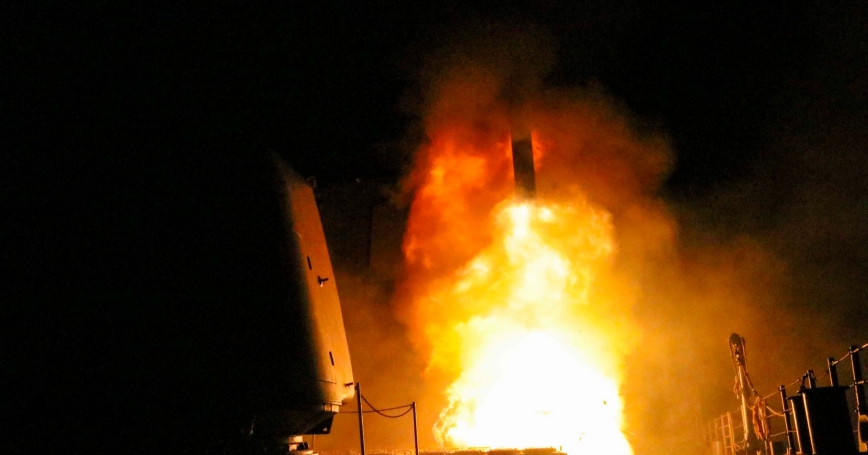 After the recent multilateral attacks in which U.S., U.K. and French warplanes struck chemical weapons facilities, President Donald Trump declared on Twitter, “Mission Accomplished.” The attacks, in response to the Syrian government's suspected use of sarin, destroyed several facilities with ties to the Syrian chemical program, reportedly taking out a research facility, a command post and a sarin nerve agent stockpile. However, given the human carnage and destruction of a society that has occurred during this Syrian conflict, such a declaration might be seen by some as hyperbolic.

While the attacks had important symbolic benefit in destroying small parts of Bashar al-Assad's chemical development capabilities, history indicates it is unlikely that the world has witnessed the last of the use of chemicals against populations in Syria or that all the regime's chemical munitions have been eliminated.

Following August 2013 chemical attacks against civilians in Ghouta, Assad agreed to the “Framework for the Elimination of Syria Chemical Weapons.” (PDF) Under the United Nations Security Council Resolution 2118, Assad agreed to the destruction of all chemical weapon stockpiles by mid-2014. An international coalition—including the Organization for the Prohibition of Chemical Weapons (PDF), the implementing body of the Chemical Weapons Convention—and in coordination with the Syrian government began the elimination of chemical stocks. The recent attacks indicate that Assad failed to abide by either the convention or to the framework agreement.

Turning back to whether declaring “mission accomplished” was apt, one could certainly make the case that the military forces that planned and executed the missions hit the intended targets with no reported civilian casualties, indicating the tactical operation was successful. However, equally compelling is that the limited strikes, designed to send a signal without causing retaliation from Russia and Iran, seem unlikely do much to halt the further use of chemicals in the conflict.

Again, history provides a useful antecedent. After the April 2017 chemical attack, over 270 employees of the Syrian government agency responsible for producing the chemical weapons and ballistic missiles were sanctioned and incontrovertible evidence of the regime responsibility was provided, yet Russia continued to support the Assad regime and even vetoed the UN resolution condemning the attack. These actions also failed to prevent the most recent attacks.

Looking at the implications for chemical nonproliferation and the CWC, declaring mission accomplished seems overly optimistic. The last 15 years have seen a growing willingness to employ chemicals on the battlefield and in cities as tools of assassination. The successful assassination of Kim Jong Un's half-brother in a Malaysian airport with a binary VX nerve agent and the recent attempted assassination of former Russian spy, Sergei Skripal, and his daughter Yulia with a novel Novichok or N-series nerve agent signal callous disregard for international norms and an inability deter their use. In the case of the alleged Russian attack, the novel agent use was almost a calling card designed to signal what happens to those that cross the Russian government and Vladimir Putin.

Accomplishing the mission of halting the use of chemical weapons in Syria and restoring some semblance of global chemical nonproliferation would require gaining agreement to have Assad removed from power, a legitimate government elected, Assad prosecuted for crimes against humanity, and unfettered access by the OPCW to sites in Syria to ensure that all chemical weapons are eliminated and toxic industrial chemicals adequately protected to prevent their use as weapons.

It would also require Russia to have a reason to support the international community and the cause of humanity over Assad. Support for Assad has made Russia an unreliable partner and complicit in the chemical atrocities perpetrated by the Assad regime. The increased sanctions and freezing the assets of wealthy Russians that have been recently imposed are a start. To have the desired effect, the international community would have to continue to stand firm in this cause.

Mission accomplishment in Syria, just like in chemical weapon nonproliferation, will require far more than missile strikes alone. A commitment to fundamental change will be required to restore order in and rebuild Syria and to restore the nonproliferation regimes that have increasingly weakened over the past 15 years. The use of chemicals cannot be allowed to become an acceptable form of warfare either in Syria or anywhere else.

Daniel M. Gerstein works at the nonprofit, nonpartisan RAND Corp. and is an adjunct professor at American University. He was the undersecretary (acting) and deputy undersecretary in the Science and Technology Directorate of the Department of Homeland Security from 2011 to 2014.