The Need for Superpowers to Embrace a Vision of World Affairs 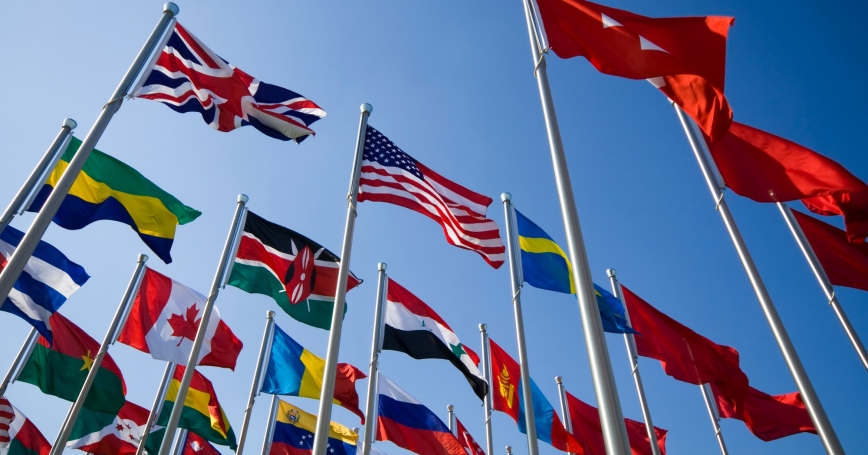 A growing number of observers are once more expressing concern over the erosion of U.S. preeminence. “In retrospect, the era of American hegemony … was remarkably brief,” Washington Post columnist Anne Applebaum lamented after President Donald Trump broke with key U.S. allies and withdrew from the Iran nuclear deal in May. The United States has defied many declinist predictions in the postwar era. While the latest one may, too, prove premature, it is not without cause. Withdrawing from the Trans-Pacific Partnership has reduced America's economic leverage in the Asia-Pacific and enabled China to gain further traction for its own trade and investment initiatives in the region. Trade tensions with longstanding allies including the European Union, Japan, Canada and Mexico have compounded U.S. isolation. And unlike his postwar predecessors, President Trump harbors a deep skepticism toward U.S. support of and participation in what is loosely called “the postwar order.” These realities suggest that U.S. influence in world affairs is declining—a conclusion that recent research would seem to affirm: Last month, the Sydney-based think tank the Lowy Institute concluded that while the United States is still the dominant power in the Asia-Pacific, China will become the preeminent regional power by 2030.

But shifts in world power are more complicated than they seem. While the rise of other countries and the growing heft of nonstate actors mean that America's relative decline will likely continue, there is more to a country's standing than the kinds of metrics that capture headlines. A power rises to preeminence not simply by dint of the force it wields, but by virtue of the vision it embodies: It promulgates a conception of world affairs that attracts others, enabling it to advance its objectives and amplify its values far more than it could do on its own. Washington has a significant edge over Beijing in this regard, one reason why we are less likely to witness a clean, discrete power transition between the two countries than an uncertain, fluid bilateral balance.

A power rises to preeminence not simply by dint of the force it wields, but by virtue of the vision it embodies.

Consider a typical indicator of national prowess: military strength. Beijing's military expenditure could overtake America's by the mid-2030s, according to a 2013 projection by the International Institute for Strategic Studies. But the composition and use of those military outlays matter at least as much as the level. China will not be a military peer until and unless it can apply armed force as quickly, lethally and globally as the United States. “Most of the military modernization underway in China corresponds to achieving the types of capabilities the United States has already attained,” Cortez Cooper, a senior international defense researcher at the nonprofit RAND Corporation, observed in recent testimony before the U.S. China Economic and Security Review Commission. Washington is fighting terrorist organizations in at least 14 countries and as of last year had special operations forces deployed in roughly three-quarters of the world's 195 countries. Leaving aside questions of the wisdom of what some might perceive as an overextension, America's ability to project military power into any corner of the world is a core element of its superpower status.

Economic indicators, too, are more ambiguous than they are sometimes made out to be. A recent report by the London-based Center for Economics and Business Research estimated that China's gross domestic product will overtake America's in dollar terms by 2032. But size is not everything; to be considered an economic peer, China would need to have a per capita GDP roughly four times its current level, a comparably robust system of innovation and a currency that figures as centrally in global financial markets as the greenback. It is undoubtedly making progress on all these fronts. Its per capita GDP has roughly quadrupled over the past decade. Taking inspiration from Germany's digitized manufacturing push, dubbed “Industry 4.0,” China has articulated an ambitious plan, “Made in China 2025,” to become a world leader in advanced manufacturing, laying out concrete targets in 10 priority areas. And the German Bundesbank's recent announcement that it would begin to include yuan in its reserves is another small step forward along the Chinese currency's path of internationalization. Still, true economic parity between Washington and Beijing is far away.

A more abstract factor is the ability to regenerate fundamentals of national power such as population size, economic growth and innovative capacity. In large measure due to immigration, the United States has the most favorable demographic outlook among major powers: The Pew Research Center projected in 2015 that future immigrants and their U.S.-born children would account for 88 percent of the country's population growth through 2065 (though the Trump administration's desire to reduce immigration could dampen that trajectory). Thanks to the shale revolution, the United States is on track to become a net exporter of energy products by 2022, a feat it last accomplished in 1953. And, despite a concerning dip in international students in 2017, it retains an unmatched ability to attract and harness global talent.

However comprehensive national power is defined, China will continue to grow relative to the United States. But history suggests that secular trends alone are not the be-all and end-all in terms of predicting preeminence. While the U.S. economy overtook Britain's in absolute size in the last quarter of the 19th century, Washington did not emerge as the world's preeminent power until the end of World War II. This outcome resulted in part by default; the devastation that Europe and Asia suffered during the war meant that the United States had a singular capacity to lay the foundation for a postwar order. Critically, though, the Truman administration harnessed that inheritance toward a strategic end: building a framework around the United States—grounded in multilateral institutions such as the United Nations, the International Monetary Fund and the World Bank—that elevated collective interests over narrow ones and gave Washington an unrivaled ability to convene problem-solving coalitions. Subsequent administrations expanded this system, appreciating that the United States could strengthen its perch by enabling the progress of former antagonists and longstanding friends alike.

The Trump administration is the first of the postwar era to challenge this framework, instead regarding the world as “an arena of continuous competition” (PDF) and reverting to a largely transactional style of foreign policy. Abandoning the Trans-Pacific Partnership, declaring its intention to withdraw from the Paris climate accord, decertifying the nuclear deal with Iran, and asserting a “national security” rationale for imposing tariffs on longstanding European and Asian allies all steer the United States away from the course of statecraft that it benefited from in the 20th century. They also reflect a rejection of multilaterally agreed rules and processes in favor of “a power-based order—in which the U.S. lays down the law and others are compelled to follow,” Gideon Rachman, a Financial Times columnist, explained last month. While America's current margin of preeminence might sustain this unilateral imposition for now, the United States may hasten its relative decline if it persists with such arrangements; beyond encouraging competitors to intensify revisionist efforts, it could prompt allies to reduce dependence on U.S. actions (as Western leaders have already threatened following the U.S. withdrawal from the Iran nuclear deal and Trump's decision to withdraw U.S. support for the declaration that was signed at the recent G7 summit).

Beijing's resurgence over the past four decades may mark the most extraordinary accretion of power in history. It has become a formidable long-term competitor in the process—consolidating its control over the South China Sea, undertaking large-scale geoeconomic projects such as the Belt and Road Initiative, and growing increasingly vocal in its rejection of Western ideology. To surpass the United States as the preeminent power steering the global community, it will likely have to channel its power into and anchor its ambitions in a coherent, compelling conception of world affairs. “A superpower,” the political scientist Samuel Huntington observed three decades ago, “has to stand for an idea with appeal beyond its borders.” China has yet to articulate such a notion, not only because it has benefited immensely from integrating itself into the postwar order, but also because shouldering the perceived responsibilities that attend to superpower status would divert resources away from its pursuit of a national renaissance. While its foreign policy has enabled it to generate an impressive base of national power, Beijing has been unable to inculcate a distinct vision within a network of alliances.

If the United States seeks to continue playing the principal role in world affairs, it should focus on renewing its core strengths.

If the United States seeks to continue playing the principal role in world affairs, it should focus less on matching each initiative that comes out of China and more about renewing its core strengths—one of which has been an order that facilitated the recovery of war-torn areas and embraced positive-sum geopolitics. That vision, though, is increasingly under duress. A growing number of emerging powers regard the postwar order less as a self-evident gift than as an illegitimate imposition. Borderless challenges including cyberthreats and climate change are testing that framework's problem-solving capabilities. Finally, as the 2016 presidential election clarified, Americans who are experiencing economic hardship and demographic anxiety understandably feel little commitment to abstractions about “order,” “engagement” and “leadership.”

In brief, Washington would have to do an enormous amount of work abroad and at home to modernize the system it constructed after World War II. For now, as recent statements by longstanding allies affirm, it is actively undercutting that framework and, in the process, a key source of competitive advantage. “Can countries including China and the U.S., especially China and the U.S., agree on one rule-based order, which President Xi Jinping said he supports?” Singaporean Defense Minister Ng Eng Hen asked after this month's Shangri-La Dialogue, the principal forum devoted to exploring security trends in the Asia-Pacific. It is unusual for a top official from one of America's key regional allies to juxtapose the two countries in this way, implicitly questioning America's commitment to a rule-based order. Ahead of the more recent G7 Summit, French President Emmanuel Macron issued an even more striking rebuke: “The American president may not mind being isolated, but neither do we mind signing a six-country agreement if need be. Because these six countries represent values, they represent an economic market which has the weight of history behind it and which is now a true international force.”

Proponents of an “America First” approach to foreign policy may not worry about such statements or believe that U.S. influence has benefitted much from a strategic vision. They would do well, though, to recall the words of French political theorist Raymond Aron, who argued that “the strength of a great power is diminished if it ceases to serve an idea.” While geopolitical commentary increasingly abounds with discussion of a power transition between Washington and Beijing, the world may actually find itself suspended between two giants whose behavior defies expectations: a reigning power that attacks a longstanding source of its own influence on one side and a putative replacement that struggles to define itself as an idea on the other.

A version of this commentary originally appeared on newrepublic.com on June 21, 2018.