Regime Change in Iran: Watch What You Ask For 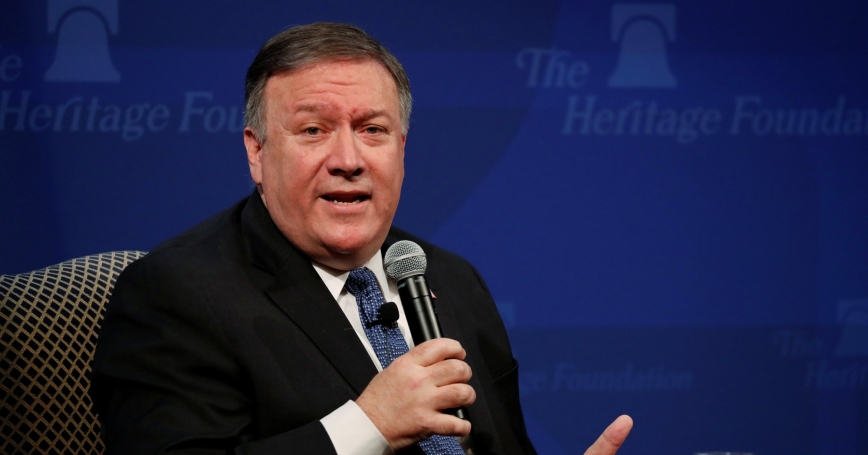 U.S. Secretary of State Mike Pompeo delivers remarks on the Trump administration's Iran policy at the Heritage Foundation in Washington, May 21, 2018

Secretary of State Mike Pompeo's speech on Iran in May was widely interpreted as a call for regime change. President Trump reinforced that last week with an all-caps tweet warning “NEVER EVER THREATEN THE UNITED STATES AGAIN OR YOU WILL SUFFER CONSEQUENCES THE LIKES OF WHICH FEW THROUGHOUT HISTORY HAVE EVER SUFFERED BEFORE.” This week, Trump offered to meet his Iranian counterpart with “no preconditions.”

Ostensibly these threats and inducements are designed to bring Iran back to the negotiating table. But Pompeo showed his hand, and the administration's when he said after his speech: “At the end of the day, the Iranian people will get to make a choice about their leadership.”

Insanity is sometimes described as doing the same thing repeatedly and expecting different results. Promoting regime change in Iran would fit this definition. Back in 2012, popular uprisings overthrew the governments of five Middle Eastern countries. After some hesitation, the Obama administration expressed support for these revolutions and in a couple of cases even provided material support. Six years later, Libya, Syria and Yemen are still in the midst of civil war. Egypt now has a government even more repressive than the one the people overthrew. Only Tunisia, where those Arab uprisings started, is still struggling to consolidate its democracy.

U.S. and Iran Are Historically at Odds

The United States also has a history with Iranian revolutions. In 1953, the CIA helped launch a coup that overthrew the elected government in favor of a repressive monarchy, thereby creating an enduring grievance among Iranians toward the United States. In 1979, another uprising toppled this American-backed regime and installed the government the United States now wants to see gone.

It's easy to see why. From its inception, the Islamic Republic of Iran has been hostile to the United States. Over time new grievances have been added to old on both sides. Iranian-backed militants killed hundreds of American Marines in Beirut in 1982 and bombed an American military housing area in Saudi Arabia in 1996. The United States supported Iraq's Saddam Hussein in his aggressive 1980–88 war on Iran and shot down an Iranian civil airliner flying in Iranian airspace with 290 innocent people aboard.

What reason is there to believe that Iran's next regime would represent an improvement?

Yet, given America's experiences with Middle Eastern and more specifically Iranian revolutions, what reason is there to believe that Iran's next regime would represent an improvement? Iran is in ferment. Regime change is distinctly possible, but not necessarily imminent. Popular demonstrations are widespread, but not nearly as large as those that protested former President Mahmoud Ahmadinejad's apparently stolen election back in 2009.

And today's protesters are not predominantly from the urban middle class, as were those nine years ago. If the elected government of Hassan Rouhani falls, it is unlikely to be replaced by committed democrats. If the unelected clerics who are the ultimate authority in Iran also fall, they won't likely be replaced by moderate secularists.

Just as Egypt's 2012 uprising ultimately produced a military dictatorship, the fall of Iran's clerical regime could well bring that country's most powerful institution — the Revolutionary Guard Corps — to the fore. After all, the most popular man in Iran today is Qasem Soleimani, the head of the Revolutionary Guard's strike force operating in Syria, Iraq and Yemen. A government dominated by the Iranian security establishment would hardly represent an improvement for the United States and its regional allies.

If the president's most recent overture is a step back from calling for regime change, this is to be welcomed. The U.S. government should focus on policies that increase the likelihood of a positive outcome from regime change, if and when it comes. This could involve targeting sanctions more narrowly rather than seeking to impoverish the general population, and encouraging people-to-people ties. A good start could be lifting the comprehensive ban on Iranian visitors to the United States so that young Iranians can come here to study and the many Iranian relatives of American citizens can come here to visit their families.

Steps like this are a better course than seeking to accelerate a revolution with no means of predicting what will happen next.

James Dobbins is a senior fellow at the RAND Corporation and a former Assistant Secretary of State.

This commentary originally appeared on USA Today on August 1, 2018. Commentary gives RAND researchers a platform to convey insights based on their professional expertise and often on their peer-reviewed research and analysis.