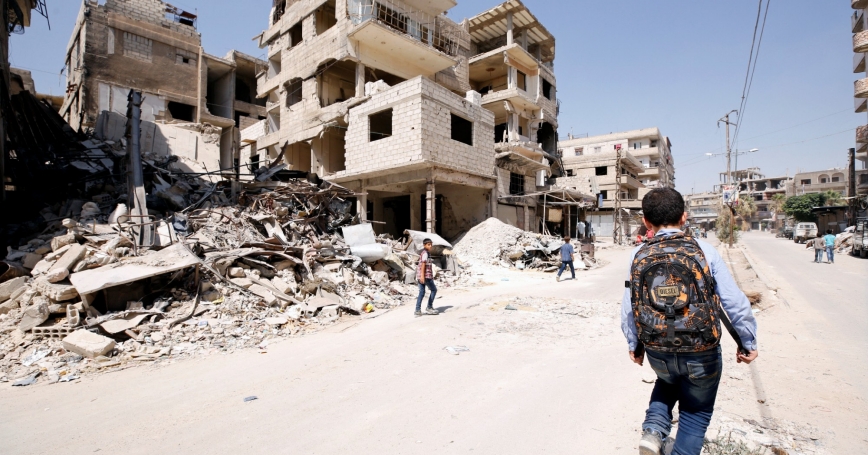 A student walks along a damaged street in the town of Kafr Batna, in eastern Ghouta, Syria, September 5, 2018

RAND Europe and the European Parliament released a report in May on the cost of terrorism in the EU. Examining far more than direct costs, such as loss of life or damage to persons and infrastructure, the study also measured the indirect psychological impact on European citizens—people not involved in terrorist attacks, but suffering from anxiety and fear as a result—and its effects on GDP. It found that terrorism had a significant economic impact, costing Europe €180 million between 2004 and 2016.

Even though instability has long plagued countries in the Middle East, scholars have not yet conducted similar studies measuring the cost of terrorism in this region. There could be three reasons for this: Terrorism is so frequent that it is considered the “norm”; the Western countries that conduct these studies are geographically distant; or the complexity of violent actors in this region makes the subject difficult to research. However evidence suggests that terrorism has had a devastating economic impact on the Middle East far outweighing that of the West.

The costs of terrorism, however, extend far beyond physical destruction. In the Middle East in particular, there are serious cultural and economic impacts as well. In Iraq and Syria, ISIS has ransacked thousands of ancient heritage sites. Given their cultural and historic significance, the value of many of these sites is priceless. Some reports suggest that the sale of stolen artifacts on the black market may be ISIS' second largest source of revenue, after oil. A number of these ancient artifacts have turned up in London antique shops. Many historic places have been added to UNESCO's list of endangered sites as a result of looting and destruction, including six additional sites in 2013 alone.

These losses are compounded by the dramatic drop-off in tourism within Syria and Iraq. The Syrian Ministry of Tourism has tried to boost tourism by releasing a series of YouTube videos. The videos showcase Syria's clear blue seas and beautiful beaches—an attempt to rebrand a country that many solely associate with the brutalities of war. In 2011, before the Syrian civil war entered its most destructive phase, 8.5 million tourists visited the country, adding almost $8.3 billion to the nation's economy (around 13.5 per cent of Syria's GDP). In contrast, only 400,000 tourists visited Syria in 2014. A number of other nations, such as Tunisia and Egypt, have suffered similar declines in tourism in the wake of terrorist attacks, dealing a devastating blow to their economies.

Terrorism has also had a major impact on one of the Middle East's other most critical industries, oil. Terrorists have targeted oil facilities in several Middle Eastern nations, causing supply shortages. At one point, Iraqi oil production had fallen by as much as 320,000 barrels per day because of ISIS attacks. ISIS' territory includes a number of oil facilities. The proceeds of oil sales go to the terrorist group, diverting revenue that would normally be used to finance national infrastructure projects. In 2014, ISIS controlled 60 per cent of Syria's oil capacity and the group made almost $3 million per day from the illegal oil trade. Even though ISIS has recently lost a large amount of territory, the terrorist organization still controls significant wells in northern Iraq—denying Baghdad of much needed revenue.

Terrorism significantly affects the Middle East's economy, to a far greater extent than it does in Europe. So it seems a critical oversight that studies have not attempted to estimate the total cost of terrorism in the Middle East, given that this region has seen the sharpest increase in terrorism (PDF) during the past 15 years.

Institutions in Western countries which fund these studies are, perhaps understandably, more concerned about the impact of terrorism on their own nations. It is easy for the Western world to dismiss the cost of terrorism in the Middle East because it is both far away and seemingly a part of daily life for the region's people. In contrast, acts of terrorism in the West are viewed as dangerous aberrations.

Though the physical impacts of terrorism in the Middle East should be the primary focus of counterterrorism efforts, financial impacts should not be ignored. There is merit in measuring the cost of terrorism as a way to identify gaps and challenges in intelligence. By identifying and protecting essential regional revenue streams like tourism and oil, counterterrorism officials could help mitigate the devastating economic effects that extremist groups inflict on the Middle East.

This commentary originally appeared on Georgetown Security Studies Review on September 21, 2018. Commentary gives RAND researchers a platform to convey insights based on their professional expertise and often on their peer-reviewed research and analysis.