ISIS's New Plans to Get Rich and Wreak Havoc 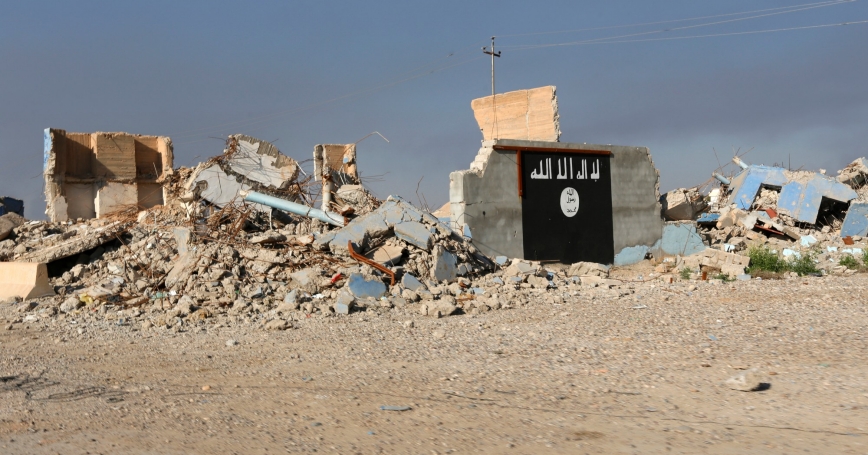 A destroyed building with a wall painted with the black flag commonly used by Islamic State militants in the town of al-Alam, Iraq, March 10, 2015

Although the Islamic State has lost nearly 98 percent of the territory it once controlled, the group is ripe for a comeback in Sunni-majority areas of Iraq and Syria. The main reason is its existing war chest, coupled with its skill at developing new streams of revenue. The Islamic State used to mostly rely on the territory it controlled, including cities and urban strongholds, to amass billions of dollars through extortion, taxation, robbery, and the sale of pilfered oil. But the group has proven that it is capable of making money even without controlling large population centers.

During the apogee of its territorial control in 2015, the Islamic State accrued nearly $6 billion, making it by far the wealthiest terrorist group in history. How could a militant group compile the equivalent of a nation-state's gross domestic product? When it did hold territory, the Islamic State primarily generated its wealth from three main sources: oil and gas, which totaled about $500 million in 2015, mostly through internal sales; taxation and extortion, which garnered approximately $360 million in 2015; and the 2014 looting of Mosul, during which the Islamic State stole about $500 million from bank vaults.

The Islamic State has now lost most of its territory. The group has been relegated from controlling territory roughly equivalent to the size of Great Britain to attempting to survive while under siege in strongholds pockmarking the Euphrates River Valley. The Global Coalition to Defeat ISIS has destroyed the terrorist proto-state in the Middle East and denied its leader, Abu Bakr al-Baghdadi, his dreams of an Islamic caliphate in the heart of the region. Without access to territory, and thus a significantly reduced revenue stream from taxation, extortion, and the sale of oil, the Islamic State's funding has already decreased precipitously.

The group, however, no longer relies on territory for its economic survival. In part, that's because its surviving leadership may have smuggled as much as $400 million out of Iraq and Syria. The group's extended network will seek to launder this money through front companies in the region, especially in Turkey. Some cash could be converted to gold and stockpiled for sale in the future.

Meanwhile, even as the Islamic State has far less money coming in, the group's expenses are minimal compared to what they were just over a year ago. No pseudo-government is responsible for health care, education, paying municipal salaries, and providing public works, including trash and sewage services. With such a drastically reduced operating budget, the cash it has hoarded will provide the group with more than enough money to survive as a clandestine terrorist movement with the ability to wage a prolonged campaign of guerrilla warfare throughout Iraq and Syria.

The Islamic State has also buttressed financial holdings with a diversified funding portfolio. It has developed a knack for raising money through a range of new criminal activities, including but not limited to extortion, kidnapping for ransom, robbery and theft, drug smuggling, and trafficking in antiquities. These activities do not require holding territory, but there are risks involved for individual insurgents, who could, at least in theory, be caught. However, the chances of being arrested are minimal, as even at this late date, there are still no security services or police forces in Iraq or Syria capable of conducting the type of policing activities that would deter widespread criminality. In the near future, the group can also reinvigorate revenue streams that have become dormant by extorting populations living on the periphery of where government control extends. During the years they were in control, Islamic State members meticulously collected personal data from the population that includes detailed information on assets and income, as well as the addresses of extended family members. This critical intelligence on the population provides the group with more leverage in intimidating and extorting civilians, allowing it to replenish cash reserves in the process.

In addition to extortion, another way the Islamic State can continue to make money without holding physical territory is by extorting the reconstruction of Mosul and other devastated cities. The Islamic State's predecessor organizations, al-Qaeda in Iraq and the Islamic State of Iraq, perfected the art of extorting construction companies and other entities attempting to help rebuild cities, towns, and villages trying to recover from years of brutal sectarian conflict in Iraq. At no point did these groups control anywhere near the amount of territory once controlled by the Islamic State. Yet between 2006 and 2009, they were still able to raise substantial sums of money by extorting local and regional oil distribution networks.

This same process could very likely repeat itself over the next several years as the international community seeks to help Iraq and Syria recover from a decade of civil war. Reconstruction aid to war-torn parts of Iraq and Syria, while well intentioned, could provide an attractive target for the Islamic State and potentially help fund its comeback, something the groups could accomplish even without holding large swaths of territory. It would be easy for the Islamic State to begin skimming off reconstruction contracts; militants would simply need to establish connections with local officials tied to reconstruction projects and insert their own operatives into the supply chain, pocketing various sums of money at each step of the process. The militants work to ensure that the project is ultimately completed, albeit at an inflated price to account for the money siphoned off into the militants' pockets.

The Islamic State hasn't ceased seeking to control territory. Around Deir Ezzor, in advance of the pending assault by the Syrian Democratic Forces, the Islamic State is seeking to regain control of oil assets. According to a United Nations Security Council report from July, the group has regained control of oil fields in northeastern Syria and continues to extract oil for use by its fighters—and to sell to locals. But even after these fields are inevitably reclaimed, with the help of U.S. forces, the Islamic State will simply revert back to criminal activities that do not require the maintenance of physical territory.

The combination of current assets and a future ability to earn money will allow the group to regroup and reorganize, which has already begun happening in various parts of Iraq and Syria. Throughout Kirkuk in northern Iraq, militants constructed fake checkpoints to ambush Iraqi security forces operating in the area earlier this year. In other parts of Iraq, including Diyala and Saladin, Islamic State sleeper cells are actively conducting surveillance and reconnaissance of these areas to determine how best to operate before reorganizing small formations of fighters. And despite the onslaught of U.S. bombing raids, pockets of militants remain holed up in Hajin, north of Abu Kamal, and Dashisha, in Syria.

The West tends to view the fight against the Islamic State in discrete phases, bookended by presidential administrations or minor changes in policy. But for the jihadis, it's all one long campaign and has been since the early days of its founder, Abu Musab al-Zarqawi. Until the United States and its allies recognize this, the Islamic State is likely to repeat its strategy of going underground before re-emerging in force in perpetuity until the United States completely withdraws its military forces, or until the group is once again able to recapture enough territory to re-engineer the next stage of its caliphate-building project.

Colin P. Clarke is an adjunct political scientist at the nonprofit, nonpartisan RAND Corporation and an associate fellow at the International Centre for Counter-Terrorism in The Hague.

This commentary originally appeared on Foreign Policy on October 10, 2018. Commentary gives RAND researchers a platform to convey insights based on their professional expertise and often on their peer-reviewed research and analysis.