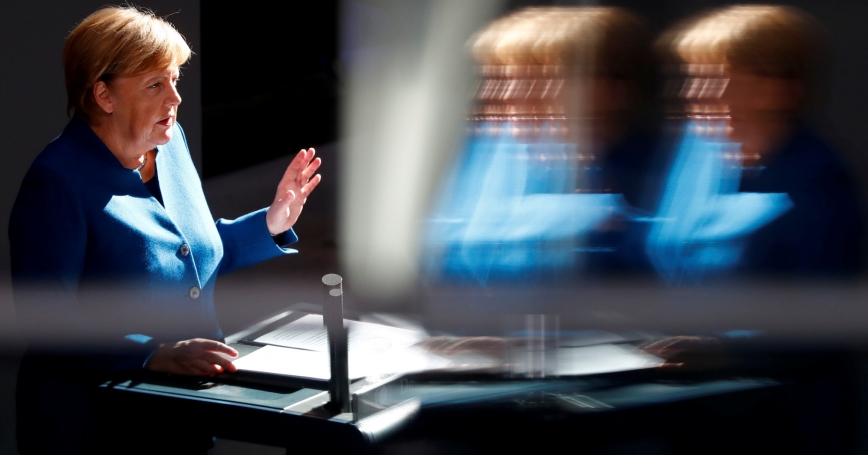 German Chancellor Angela Merkel speaks during a session at the lower house of parliament in Berlin, October 17, 2018

Angela Merkel's decision to give up leadership of her party, the Christian Democratic Union (CDU), while retaining, at least until the next German national elections in 2021, the chancellorship of Germany, is the beginning of an end.

It is certainly the end of her 16 years leading Germany's largest party and the beginning of an end to her leadership of Europe's largest and most influential country.

But it may also signal an end to a couple of larger features of post-WWII Europe: a steady center-left consensus in German politics and a committed Europeanist and Atlanticist government at the heart of an ever-more united Europe and a firmly allied trans-Atlantic community.

In the wake of Donald Trump's rise to the American presidency and his “America First” anti-globalist policies, many looked to Merkel as the de facto leader of the Western world. This was not a role to which she aspired, nor one she could fulfill.

Yet, her departure will likely leave a void in European and Atlantic leadership, which neither her successor nor French President Emmanuel Macron will be entirely able to fill.

The proximate cause of Merkel's decision to give up the CDU leadership was the setback her party received in the Hesse state elections, falling from 38 to 27 percent of votes cast. That followed a similar loss by the CDU's Bavarian sister party, the Christian Social Union (CSU), in elections there earlier in October.

This erosion of support was also evident in last year's national elections where the CDU/CSU vote fell by 8 percentage points. These losses have been largely attributed to Merkel's courageous but politically costly decision to admit more than 1 million refugees back in 2014.

Merkel's departure will leave a void in European and Atlantic leadership that neither her successor nor Macron will be entirely able to fill.

The anti-immigrant reaction to that influx led to the rise of the populist far-right Alternative for Germany (AFD) party, which has steadily taken votes from the Christian Democrats.

The biggest winner has been the Green party, which began in the 1970s on the far left of the West German spectrum but has since moved substantially toward the center to a position not far from the Social Democrats, Merkel's current coalition partners.

The AFD is thus unlikely to enter government anytime soon. Yet, the presence of a substantial pariah party on the extreme right (or left) of any country's politics can have a debilitating effect on democracy even as that party remains in opposition.

The emergence of such a party forces most of the other parties into ever-broader coalitions, thereby denying voters an acceptable alternative to the government of the day, while the parties in power find their bases slowly eroding.

The future of European integration depends less on German policy, which is unlikely to change anytime soon, than on the actions of the more fragile democracies to its south and east. The future of the Atlantic alliance depends more on what happens on this side of that ocean.

Yet, without a doubt, one of the brightest post-Cold War stars in the Western firmament—a pastor's daughter born and raised in Communist East Germany, the spokesperson for the last East German government and for the past 12 years, Europe's most influential politician, has begun to dim.

James Dobbins is a senior fellow at the RAND Corporation and a former assistant secretary of state for Europe.

This commentary originally appeared on The Hill on October 30, 2018. Commentary gives RAND researchers a platform to convey insights based on their professional expertise and often on their peer-reviewed research and analysis.