Can Innovative Financing by the Public and Private Sectors Build on Momentum in Energy Efficiency Improvements for Affordable Multifamily Housing? 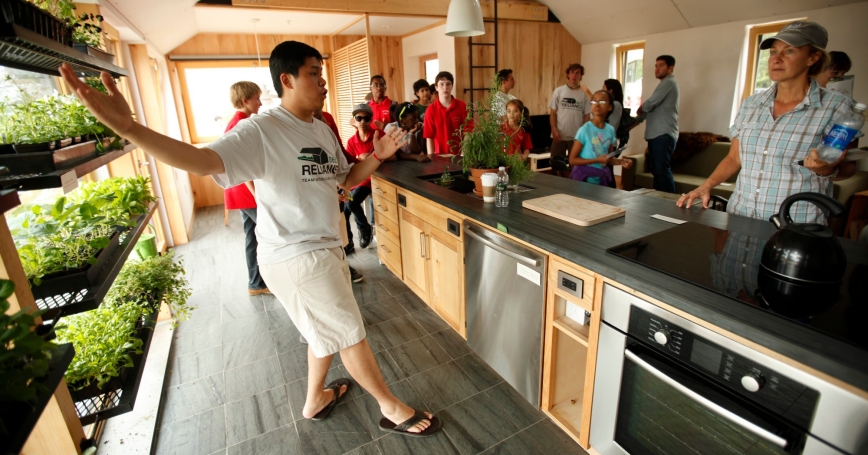 A guide explains the interior of a home designed by students of Middlebury College competing in the Solar Decathlon in Washington, September 26, 2011

Over the last two decades there have been substantial gains in home energy efficiency (EE). Household energy expenditures fell 15.6 percent per square foot of living space between 2009 and 2015. The steepest reductions in energy use were among large multifamily units, which dropped 29 percent on average, declines which were largely attributable to EE adoption in buildings. These gains in adoption of EE upgrades and retrofits were driven by both federal government leadership as well as nonprofit and philanthropic support.

Over the same period of time, starting in the early 2000s, the MacArthur Foundation embarked on an ambitious program to preserve existing multifamily rental housing with an investment in what would become the 20-year Window of Opportunity (WOO) initiative. A decade into the initiative, the foundation hypothesized that EE could be a powerful tool for preservation and made specific investments to support increased EE for affordable multifamily housing stock. Our RAND research team looked back at the EE-focused investments of the WOO initiative and found evidence of real progress over this period of time, including substantial growth in the volume and activity of finance and policymaking for energy-efficient multifamily rental properties.

Funding has historically been a key barrier to EE upgrades and retrofits. Along with the MacArthur Foundation, the Surdna Foundation, Home Depot Foundation and others invested over $80 million over the past two decades, most of it in the last 10 years. Of that, $22 million was invested by MacArthur to drive innovation in EE financial products and programs. These funds helped to pilot on-bill financing, launch a public purpose energy services company, create loan funds for energy efficiency improvements to affordable multifamily rental housing, and create an affiliate organization to fund the installation of solar power systems in affordable multifamily properties.

Concurrently, federal EE policies—such as the Energy Policy Act (EPAct) of 2005, the Energy Independence and Security Act of 2007, and the federal stimulus American Recovery and Reinvestment Act of 2009—were correlated with upticks in new state, local, and utility EE programs for residential use (Figure 1). For example, the EPAct of 2005 authorized DOE to supplement state-run EE rebate programs, spurring many states to create their own rebate programs in between 2006 and 2010. And the amount of spending through these programs has continued to increase over time even as the total number of programs remained constant.

Today, the momentum created in EE adoption faces declining energy prices and cheaper renewable energy, which erode the benefits of EE. This, coupled with declining federal leadership and fewer new state and local EE policies, may slow the further adoption of EE, especially in existing multifamily homes. However, innovative financial products and programs can help maintain momentum by addressing the key barrier to further adoption funding.

What's Next for Energy Efficiency in Affordable Housing?

Going forward, as the lowest hanging fruit in EE retrofits are seized, expanding the reach and depth of new EE projects is likely to require new thinking and incentives. Continued progress could be achieved by mitigating the split-incentive issue, which is the common mismatch between the party that pays for efficiency upgrades (owners/operators) and the party that benefits from efficiency measures (tenants). This might be accomplished through expanding financing programs and products as well as growth in local intermediaries.

Since the introduction of “green” financial products in 2012, Fannie Mae and Freddie Mac have made significant inroads in improving EE for multifamily housing. While Freddie and Fannie issued $45.2 billion in green loan products in 2017, there is a dearth of EE financial products by commercial banks for stand-alone loans for EE upgrades. Funding for EE upgrades in multifamily housing remains a significant barrier driven by high transaction costs. Most green lending focuses on very large loans for portfolios of multiunit buildings and is not available to individual property owners, including programs like on-bill financing.

Commercial banks and investors look for intermediaries to bundle EE transactions and thus make lending more cost effective. Intermediaries work with owners to help them understand the value of energy-efficiency improvements and guide them through the loan and retrofit processes. Our RAND study notes that several green lenders report that intermediaries who work with owners are key to the process. While there are some such intermediaries currently, such as Chicago-based Elevate Energy, which works in 11 states, many markets lack them. The growth of intermediaries is a potential key to the continued adoption of EE in multifamily housing.

The growing practice of aggregating (anonymized) tenant data, which allows multifamily owners to view whole-building energy-use data, is a related achievement that also holds promise in seeking to mitigate the split-incentive problem. Other solutions focus on lowering the costs of EE upgrades to fit within the benefits reaped by owners (exclusive of tenants) of multifamily properties. Another method for getting to scale could be aggregating similar properties or upgrades in bundled EE transactions.

While there is substantial momentum to build on, there is still ample room for innovative financing to fill gaps in funding. And continued growth and momentum in EE adoption is needed. Data from the U.S. Energy Information Administration shows that nearly one in three American households (31 percent) in 2015 reported facing difficulty paying their energy bills or sustaining adequate home heating and cooling. Emerging models of energy services and financing show promise, and could identify creative ways to increase access to funding that could preserve and improve home affordability for millions of Americans.

This commentary originally appeared on The Energy Collective on December 10, 2018. Commentary gives RAND researchers a platform to convey insights based on their professional expertise and often on their peer-reviewed research and analysis.