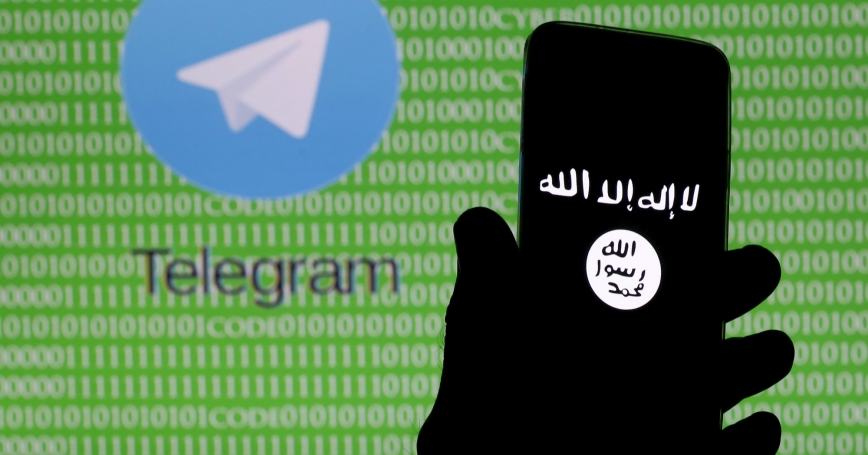 A smartphone showing the Islamic State logo in front of a screen showing the Telegram logo in Zenica, Bosnia and Herzegovina, November 18, 2015

ISIS's strategic use of social media demonstrates the resourcefulness of the terrorist-cum-insurgent organization, which mobilized an estimated 40,000 foreign nationals from 110 countries to join the group. Increasing internet access in both Africa and the Middle East means that ISIS also has a new pool of potential supporters who, through social media, could be recruited to join its effort to regain control of lost territory. Given the threats ISIS's online propaganda poses to regional and international security, policy makers and analysts may need a better understanding of the intentions of the group in the information and communication technologies (ICT) domain.

ISIS's use of social media is not new or unique; Al Qaeda in the Arabian Peninsula (AQAP) has used social media and online propaganda for more than a decade, launching its English language digital magazine, which inspired the Boston Marathon bombers, in 2010. Even the Taliban makes strategic use of social media, running its own Telegram channel, al-Emarah. The group also has Telegram channels in other languages including Pashto, Persian and Turkish, with the former two commanding 4,236 followers in 2016. The Taliban's demonstration of governance ability in its propaganda has been critical in attracting fighters and projecting itself as a legitimate governing entity, distinguishing it from the vast majority of other violent extremist groups.

Similarly, Elizabeth Kendall, an expert focusing on Yemen, highlights that 56 per cent of AQAP tweets are about community development projects in the nation. This suggests a focus on both international and domestic audiences, with the group attempting to demonstrate it is a viable and legitimate alternative to the Yemeni government. ISIS's territorial losses since 2017 undermine its portrayal of itself as a legitimate state, thus it may soon change the scope and reach of its social media outreach to maintain power.

In a recently published report for the United Nations Development Program, RAND Europe found evidence of ISIS using social media platforms like Twitter, Telegram and online propaganda magazines to recruit, radicalize and coordinate attacks in Africa. One example is the use of social media to recruit and radicalise students at the University Medical Sciences and Technology in Khartoum, Sudan. The use of social media by ISIS and other militant groups in Africa, such as al-Shabaab and Boko Haram, corresponds with increased internet access, penetration and literacy. Africa is the world's fastest growing mobile phone market, with the number of subscribers in 2000 rising from 10 million to 647 million in 2011. These statistics demonstrate the existence of large populations that insurgent groups could leverage through ICT to gain increased political power.

Like Africa, the Middle East is also experiencing a significant increase in ICT access and literacy. In 2017 there were 147 million internet users in the Middle East and North Africa (MENA) region and 93 million active social media users. Information and communication technologies have growing influence on governance and stability, illustrated by the effects of social media on civic activism in the 2011 Arab Spring as well as the subsequent regime changes in Tunisia, Syria, Egypt, Libya, Yemen and Bahrain. Despite these changes, portions of MENA populations remain highly dissatisfied with their nations' politics. ISIS leveraged this dissatisfaction in the months following the Arab Spring to enlist record numbers of foreign fighters from Tunisia, Saudi Arabia, Turkey, and Jordan. With increased social media access and activism and the slow pace of political change in the Middle East, ISIS will likely continue its use of ICTs to regain support and territory among the region's politically aggrieved domestic audiences.

In areas under its control, ISIS has previously limited civilian access to the internet, shutting down or closely monitoring internet cafes, an ironic move given the group's vocal advocacy for broad social media usage among its supporters. In November 2015, the activist group Raqqa Is Being Slaughtered Silently revealed that ISIS had ordered the closure of all internet cafes within the city to remove civilians from the influence of other movements within the country and global news sites, and to conceal the defeats it experienced, including lost territory. As ISIS continues to suffer military failures, it will likely turn to ICT operations to remove negative narratives about the group from the public eye and recruit new followers by projecting only its self-proclaimed caliphate's successes.

The importance of social media in projecting violent extremist propaganda and recruiting foreign fighters is well documented. Despite territorial losses and repression of civilian internet access, ISIS will likely continue to seek to leverage individuals' increased ICT usage in Africa and the Middle East to attract new followers. As ISIS attempts to regroup and recuperate, investigating its strategic use of ICT in its communication with civilians could be important to understanding the group's plans to regain territorial control through the support of local populations and the recruitment of new fighters.

This commentary originally appeared on Georgetown Security Studies Review on December 10, 2018. Commentary gives RAND researchers a platform to convey insights based on their professional expertise and often on their peer-reviewed research and analysis.