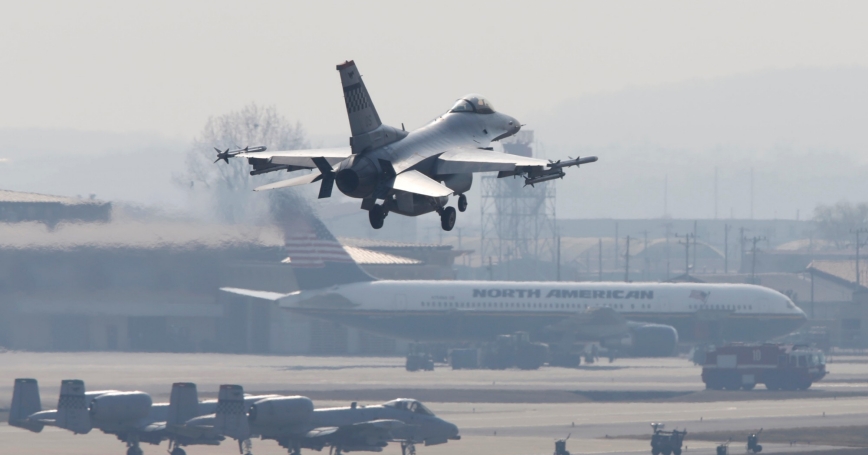 The Trump administration has long argued that America's allies are free-riding off the security provided by the United States, and demanded that they pay more for their defense. In January, President Trump put wealthy countries that host U.S. military forces “under notice” that they need to “pay the cost of this protection.”

In February, the United States reached a one-year cost-sharing deal with Seoul. South Korea agreed to pay $920 million to help cover the cost of keeping 28,500 U.S. troops in the country—$70 million more than the 2018 tab.

The latest rumor is that the Trump administration will demand that all countries where U.S. forces are based agree to a “Cost Plus 50” formula. This would require host nations to subsidize the entire cost of the U.S. military presence—and pay an additional 50 percent of that amount.

My research suggests this would be a risky move, and one that could potentially damage long-standing relationships with allies and partners. This type of transactional foreign policy increases the risk that countries will rethink their agreements to host U.S. forces. This could reduce the U.S. military's ability to operate globally, if the United States is later unable to obtain permission to use foreign bases in times of crisis.

Why Does the U.S. Have These Bases?

Since World War II, the United States has temporarily or permanently stationed large numbers of troops overseas. While U.S. bases often enhance the security of the host nation, the global base network isn't an altruistic gesture on the part of Washington. The United States frequently uses these bases to rapidly project significant amounts of U.S. power (PDF) across the globe.

Initially, the U.S. base network worked to prevent the Soviet Union from dominating the Eurasian landmass and posing a threat to North America. Today, U.S. forces overseas help contest the long-term strategic competition (PDF) with China and Russia—and support counterterrorism operations. Forces based in South Korea and Japan are also an important deterrent to threats from North Korea (PDF).

This debate aside, U.S. defense policy (PDF) continues to rely on the assumption that these bases will be there for the U.S. military use. And U.S. armed forces, in turn, rely on these overseas bases to conduct sustained operations beyond the Western Hemisphere.

Transactional Base Agreements Have Been Unreliable

Nearly all U.S. basing rights derive from voluntary arrangements—other nations agreed to allow U.S. forces to be stationed on their soil. Countries' reasons to grant U.S. basing rights usually centered on a desire for material benefits, a shared perception of threat, or a deep consensus based on mutual values.

The historical record suggests that transactional partners, those motivated by some sort of quid pro quo, were more likely to prohibit the United States from using the bases for specific military operations, or restrict or revoke U.S. base rights altogether. In Kyrgyzstan, for example, the United States faced a series of crises over Manas Air Base, which supported U.S. operations in Afghanistan, until its lease was terminated in 2014.

The Cost Plus 50 plan risks turning enduring partners into transactional ones. This would likely have repercussions for U.S. base rights and the alliances more generally.

Enduring partners—countries where there is strong support (PDF) for the relationship with the United States—have provided the most reliable access in peacetime and for specific contingencies. The Cost Plus 50 plan risks turning enduring partners into transactional ones—and this would likely have negative repercussions for U.S. base rights and the U.S. alliances more generally.

If historical trends hold true, treating basing agreements as business deals is likely to further politicize the base issue in many countries. In Japan and South Korea, this could exacerbate domestic tensions over the presence of U.S. forces (PDF). It's possible other places, like Germany, could see a long-standing consensus in support of the U.S. troop presence begin to unravel.

And there's another consideration—will this leave the United States to rely more on authoritarian states versus mature democracies (PDF) for base access? Many democratic leaders who must face a public that is sensitive to the presence of foreign troops in their country are likely to balk at base deals that don't reflect shared interests or values and seem to favor the United States. These sensitivities may be heightened if troops are not there with a mission to protect and promote those shared values, and the public comes to see them as high-priced mercenaries. Authoritarian governments, in contrast, may be more comfortable with lopsided contractual relationships.

Cost Plus 50 Isn't the Same as Burden Sharing, Though

It's common for host countries to provide various types of support, ranging from direct payments for military construction or operating costs to waived rental payments. While data on base cost-sharing deals is uneven, RAND has found that host nation support has notably defrayed, but not entirely offset, the cost of basing U.S. forces overseas.

The Cost Plus 50 proposal differs in both scope and character from past burden-sharing debates.

The United States has never demanded that nations subsidize the entire cost of U.S. forces—let alone pay an additional premium. Observers also have noted a shift in tone. Previously, the United States treated host nations as partners who provided bases because of shared interests and oftentimes values, even if this was more of a facade than true. The Cost Plus 50 approach instead appears to many to treat U.S. partners as client states that must pay for protection.

Even if the United States decided to alter its national security strategy to rely less on overseas bases, there are practical considerations. It would take significant time to adjust U.S. military operating concepts and force structure, so a shift to the Cost Plus 50 approach could lead to a destabilizing reduction in the U.S. military's ability to project power globally. Alternatively, it could lead the United States to support countries that are willing to pay, rather than those whose partnership really benefits U.S. national security.

Stacie L. Pettyjohn is a senior political scientist at the nonprofit, nonpartisan RAND Corporation and co-director of the Center for Gaming.

This commentary originally appeared on The Washington Post on March 15, 2019. Commentary gives RAND researchers a platform to convey insights based on their professional expertise and often on their peer-reviewed research and analysis.