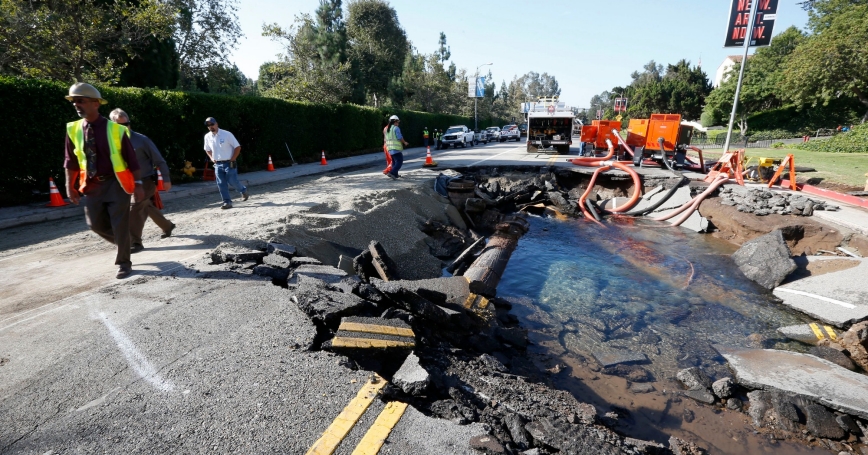 Department of Water and Power employees assess the damage from a broken 30-inch water main next to the UCLA campus in Los Angeles, CA, July 30, 2014

Water systems can learn from the electrical system by using modern sensing devices and data in a common Information and Communication Technology platform.

Much like the former electrical system, the water distribution system in California suffers massive leaks, with estimates suggesting 16 to 30 percent (PDF) of drinking water is lost to pipe leaks in Southern California. Water systems can learn from the electrical system by using modern sensing devices and data in a common Information and Communication Technology platform, which holds immense potential to reduce losses and improve efficiency of the future water grid.

Despite its remarkable conservation efforts, Southern California faces a critical water supply challenge in attempting to keep up with growing future demand. Preventing pipe leaks could significantly reduce this gap. Water officials estimate about 8 billion gallons of water are lost each year to leaky pipes, evaporation, theft, and other unaccounted causes. This lost water could meet the needs of almost 50,000 households for a year. In July 2015, the break at the juncture of two corroded pipelines under Sunset Boulevard inundated part of UCLA's campus and sent an estimated 20 million gallons of water across the Westwood neighborhood.

Underground pipe leaks in Los Angeles occur daily. Since 2006, work crews have responded to about 13,000 leaks, or about four a day across the city. These leaks have common denominators that include 100-year-old rusted-out pipes and unnoticed leakages exacerbated over time by corrosive surrounding soil.

The multi-billion-dollar U.S. electric grid, an equally critical complex network of transmission lines and distribution stations faced a similar dilemma: how to efficiently and cost-effectively reduce avoidable grid losses. Until recently, out-of-sight losses were unaccounted for in annual financial reports, while actual energy losses were as high as 2 percent during transmission and 4 percent in distribution, in part due to these hidden losses.

With the passage of the federal Energy Independence and Security Act of 2007, real-time energy demand systems and smart meters permeated the electric-utility landscape, providing a more accurate picture of vulnerabilities before they resulted in downtime. These technologies, combined with data analysis techniques, reduced downtime from hours to microseconds, allowing better continuity of service and resulting in a loss of only 5 percent of the electricity transmitted and distributed across the United States each year.

California's Open and Transparent Water Data Act, passed in 2016, provides water managers a similar opportunity. Initiatives that bring stakeholders together to automate the collecting, cleaning and storage of data on metered water use could provide a common data repository for fragmented utilities across the state. Data-centric platforms could also leverage predictive data analytics to provide operational intelligence and adaptive planning for distribution utilities. Devices to detect leakages are becoming more readily available, with newer, innovative technologies like miniature robots, acoustic sensors, and hyperspectral airborne and space-based sensors making their way to commercial markets. Using machine learning, some of these technologies can predict forthcoming leakages with an accuracy rate of 80 to 90 percent. While these devices and data-centric analytics and platforms exist, they are far from universal.

As drought and population growth place increasing pressure on water supply, the need to save and efficiently manage Southern California's water resources becomes increasingly critical. The best way to save water is to avoid losing it in the first place. The maturity of smart meters, robotics, and the Internet of Things-based measurement devices offer opportunities for today's water sector that the energy sector capitalized on to make the smart electric grid mainstream. A single information and communication technology platform combining data from active leakage-detection devices with advanced analytics and data processing could go a long way toward moving water utilities from reactive to proactive maintenance practices—and reducing avoidable pipe leakages.

Pardee RAND Graduate School fellows led the development of this series, with support from RAND researchers. Each post examines a critical and emerging water sustainability challenge for Southern California through a different lens—economics, public health, technology, and governance. These pieces are intended to spark discussion, thought, and engagement with policymakers, planners and the general public in the key debates impacting the health and sustainability of our urban systems. The John and Carol Cazier Environmental and Energy Sustainability Initiative generously supported this effort.