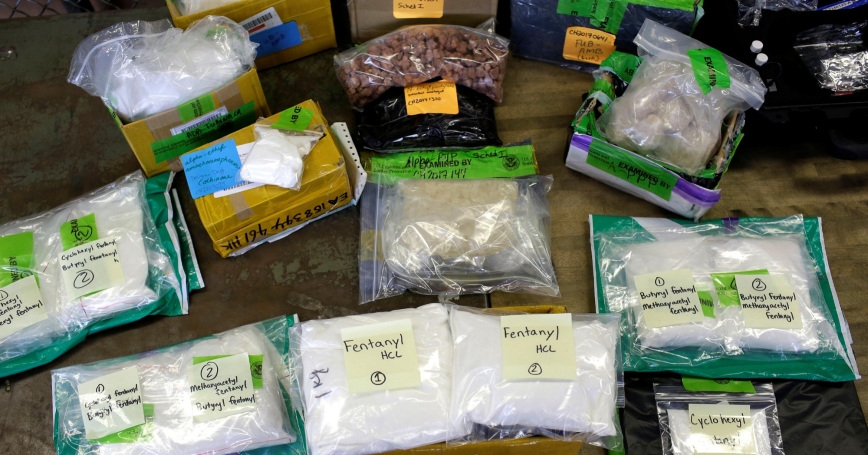 Bags of fentanyl at the U.S. Customs and Border Protection area at the International Mail Facility at O'Hare International Airport in Chicago, Illinois, November 29, 2017

The invention of the hypodermic needle and synthesis of heroin in the 19th century forever changed the opiate landscape. The arrival of cheap, accessible, and mass-produced synthetic opioids might do the same.

Synthetic opioids such as fentanyl are driving drug overdose deaths in the United States, and it is unlikely this will end soon. But unlike prescription pain relievers, the vast majority of synthetic opioid overdoses involve illicit imports from China and Mexico.

Federal law enforcement reports (PDF) that increasing amounts of synthetic opioids arrive by mail or cargo from China, many from online vendors who offer a wide range of chemicals at very low prices.

China has some 5,000 pharmaceutical manufacturers, but regulators scrutinize a small share of companies.

China recently announced it would ban substances that mimic fentanyl, typically referred to as fentanyl “analogs.” This is encouraging. However, our new RAND research raises concerns that this will not stem the flow of these substances that are claiming so many lives.

Fentanyl is not prohibited in China—only its unauthorized manufacture and handling is. The country legitimately produces fentanyl for medical purposes. The proposed blanket ban on fentanyl-related substances will probably apply to new chemicals that do not have an established medical benefit, but the ban would not apply to fentanyl.

RAND research raises concerns that China's ban on fentanyl analogs won't stem the flow of these substances that are claiming so many lives.

That may complicate Chinese authorities' efforts to limit illicit fentanyl manufacture since some producers may claim they are not violating the law given that fentanyl is an approved product. Though many fentanyl analogs are reported in drug seizures by crime labs in the United States, fentanyl remains the dominant synthetic opioid. Opioid overdose statistics back that up. In 2017, there were twice as many overdoses involving synthetic opioids (PDF) as there were involving heroin or prescription opioids, according to the Centers for Disease Control and Prevention.

Manufacturers in China can operate in the shadows because the country does not have enough inspectors, and has spotty regulatory design and lax enforcement. China also has some 5,000 pharmaceutical manufacturers, but regulators scrutinize a small share of companies. In 2017, authorities inspected only 15 manufacturers of narcotics and controlled substances; three failed to pass because of improper handling and transport. In general, regulators inspect few firms, and a high failure rate of those that manufacture controlled substances should be of greater concern to authorities.

Inadequate regulatory capacity at the national level in China has resulted in provincial authorities enforcing drug manufacturing rules issued by the central government. However, many local authorities are economically and politically affiliated with producers—and therefore reluctant to crack down. Adding another rule to the rule book, on its own, won't solve the problem. Chinese inspectors must be free to inspect firms without notice, and law enforcement in China will need to analyze and determine if powders found in labs are structurally related to fentanyl. Changes like these take resources and a transparent commitment to enforcement.

Broad controls may have unintended consequences, shaping the drug market by pushing the development of chemicals that fall outside of the law.

Broad controls on fentanyl may have unintended consequences, shaping the drug market by pushing the development of chemicals that fall outside of the law.

Other countries besides China have the capacity to supply America's insatiable appetite for opioids. Assuming China effectively regulates synthetic opioids, India or others could meet demand. Arrests for illicit manufacture and exportation of fentanyl were reported in India in 2018.

Given China's recent decision to ban the unauthorized manufacture of fentanyl, authorities there appear to recognize a growing problem. China might have more success dealing with it if it worried more about independent oversight and regulatory adherence rather than banning the production of specific substances.

Still, China cannot solve America's opioid problem. Insufficient enforcement and regulatory gaps in China are making it worse, but the United States could do more to reduce demand for opioids as well as drug users' exposure to these powerful drugs.

While increasing access to treatment for people who are experiencing problems with heroin or prescription opioids must remain a priority, policymakers and other interested parties need to think innovatively about reducing the harms associated with using these substances. Interventions such as supervised consumption sites and drug content testing won't solve the fentanyl problem, but they deserve to be seriously considered.

At this point in the opioid overdose crisis, we need to have less talk about what China can do to address our problem and more discussion about what we can do at home.

This commentary originally appeared on Los Angeles Times on May 22, 2019. Commentary gives RAND researchers a platform to convey insights based on their professional expertise and often on their peer-reviewed research and analysis.