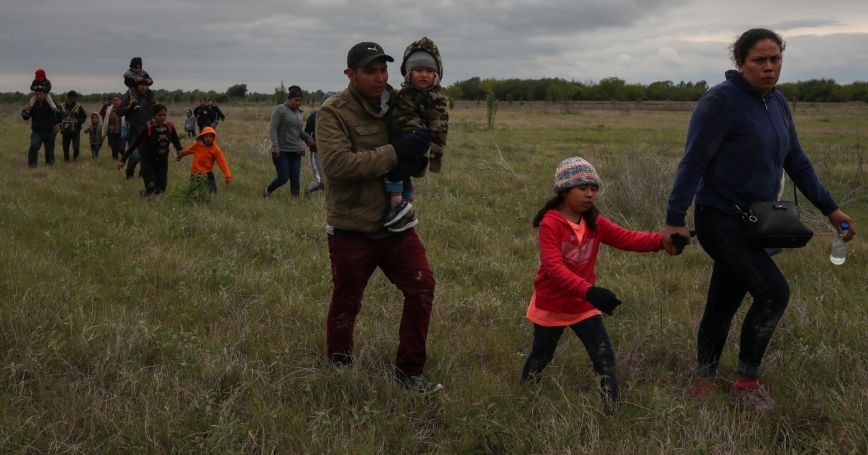 After years of declines, apprehensions of undocumented immigrants at the U.S.–Mexico border are set for their largest year-on-year increase in history (PDF).

If the Department of Homeland Security's internal forecasts are correct, Border Patrol agents may make 1 million apprehensions this year—almost triple the number that they made in 2016 and 2017.

There is, in fact, a humanitarian crisis on the U.S. border with Mexico. How did this come about? More importantly, what can be done to address this crisis?

This massive surge in migration is driven almost entirely by families and children from Central America who now account for more than 60 percent of the people encountered by Border Patrol agents on the border.

This is unprecedented, and because families and children cannot be detained for more than 20 days, it has brought the U.S. immigration system to the breaking point.

As a result of this surge and a lack of available detention beds to house families, border officials are releasing families directly into the interior of the country.

There is, in fact, a humanitarian crisis on the border. How did this come about? More importantly, what can be done to address it?

The administration has also redeployed inspectors from U.S. ports of entry to help process families, leading to long wait times for legitimate travelers and trade at legal border crossings.

Instead of evading detection, these migrants are largely claiming asylum, which allows them to remain in the United States—and work—until their cases are heard. Because the immigration courts have a rapidly increasing backlog of more than 800,000 cases, it now takes an average of two years for a case to be heard.

Families from Central America appear to believe that the prospect of being able to safely work and send their children to school in the United States while their asylum cases are being heard is better than staying in their home countries and worth the risks associated with the expensive and dangerous journey to the United States.

Over the past 18 months, the administration has

Despite these actions, families and children from Central America have been arriving in increasing numbers even as the administration's policies and rhetoric have become increasingly hard-line. What is going on here?

One issue could be that most of the policies the administration has tried so far are not targeted to families and unaccompanied children.

For example, sending troops to the border and declaring an emergency to build additional barriers will help the Border Patrol identify and apprehend individuals seeking to avoid detection, but these families and children are actively seeking out agents, not trying to avoid them.

One potential reason for the surge could be the fact that, in the age of social media and social networks, migrants are increasingly aware—in real time—of what is happening on the border.

The administration's tough rhetoric may actually be counterproductive absent any real changes to the asylum system. Families from Central America may believe that the president will—at some point—succeed in changing the system.

But they may well know through social networks, news reports, and smugglers that so far there has been less change than advertised. This might create a perverse incentive for them to get to the border before it's too late.

Addressing the current crisis at the border in a meaningful way may well require legislation. Creating a bipartisan consensus on this topic may be difficult given the current political climate, but Congress could consider the potential costs and benefits of the following steps.

Lastly, Congress could consider including substantial assistance for El Salvador, Guatemala, and Honduras to address the root causes of the surge in those countries.

Engaging in nation-building is a difficult proposition, but America will likely continue to see desperate families make their way north if the rule of law and the economies in these countries do not improve.

Any such assistance could be conditioned on these countries implementing robust anti-corruption measures, including the creation of independent panels like the United Nations-led effort in Guatemala that brought charges against and the eventual expulsion of a former president and vice president by the government earlier this year.

The good news is that the United States has partners in the region who may be eager to participate in this kind of effort aimed at addressing the root causes of the crisis in Central America. The United States could take them up on it.

This commentary originally appeared on The Hill on May 1, 2019. Commentary gives RAND researchers a platform to convey insights based on their professional expertise and often on their peer-reviewed research and analysis.