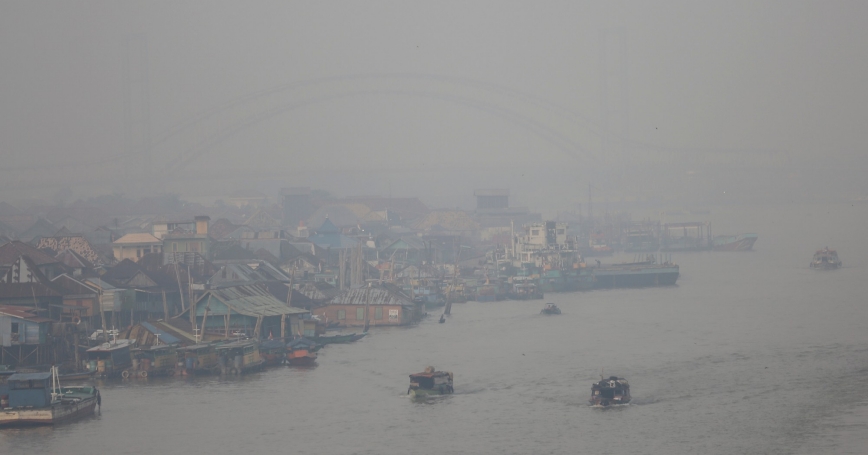 Boats on the Musi River shrouded in smoke following an increase in fires in the region in Palembang, South Sumatra, Indonesia, September 16, 2018

Forest and land-use fires are ravaging Indonesia's Sumatra and Kalimantan islands. Haze from these fires threatens lives as inhaling smoke can cause heart and respiratory diseases, leading to premature deaths.

Smoke exposure would lead to about 36,000 premature deaths per year on average across Indonesia, Singapore and Malaysia over the next few decades if current trends continue.

We study the intersection of land use, fires and air pollution. Based on our latest study, smoke exposure would lead to about 36,000 premature deaths per year on average across Indonesia, Singapore and Malaysia over the next few decades if current trends continue—that is, if no comprehensive land management strategies, such as peatland restoration, are undertaken.

To prevent premature deaths from toxic haze, we developed a new online tool to provide decision-makers with information to protect people living downwind from the fires.

Recent severe haze episodes occurred in 1997, 2006 and 2015. While the fire season varies in intensity from year to year, fires recur every year in Indonesia.

With limited firefighting resources, authorities need to identify priority areas to target conservation efforts to limit vulnerability to fire. Our study shows that one way to set priorities is to determine areas where the threat of smoke to human health is greatest.

Science-based evidence can do this by calculating the impact of haze on populations' health burden. Populations that are downwind from fires are more prone to smoke exposure and resulting health problems.

We developed a scientific framework that incorporates satellite-derived data sets on land use, land cover and fire emissions, modeling of where smoke travels in the atmosphere, and health impacts from smoke exposure.

We also project future land use and land cover transitions for the next decade associated with a range of dry to wet conditions. Finally, we calculate the health impacts as a result of smoke exposure for Indonesia, Singapore and Malaysia.

While our land use and fire data sets are spatially explicit, our estimates for health impacts are at country scale.

As part of our study, we created the SMOKE Policy Tool. This is an online application that tracks smoke and allows stakeholders to explore the health benefits of blocking fires in different regions and under various land management scenarios. Users can target one or a combination of concessions (oil palm, timber, logging), conservation areas, peatlands and individual provinces.

The tool also estimates the number of premature deaths associated with exposure to haze. In the business-as-usual scenario over the coming decades, we estimate about 36,000 premature deaths per year across Indonesia, Singapore and Malaysia.

In addition, we predict that fire-related PM2.5, the tiny particles in smoke, will reach 18-20 µg/m3 from July to October in Singapore and Indonesia. That level is nearly double the guidelines set by the World Health Organization.

Estimates of public health impacts are likely to be conservative, based on our assumptions. For example, we did not consider the effects of climate change in making droughts worse, or take into account future shifts in human population.

However, because our scientific framework is flexible, we can incorporate updated information on fire emissions, land use, smoke exposure and population density as new datasets become available.

Future versions of the tool can incorporate near-real-time monitoring of fire emissions and health impacts analysis at sub-country scale.

Most of the premature deaths due to haze in Indonesia can be avoided if the government succeeds in restoring the moist conditions in all peatlands in Sumatra and Kalimantan.

Most of the premature deaths due to haze in Indonesia can be avoided if the government succeeds in restoring the moist conditions in all peatlands in Sumatra and Kalimantan.

Our study finds that while peatlands comprise less than 20% of land area in Indonesia, peat fires contribute about two-thirds to overall fire emissions.

As part of the development of the SMOKE Policy Tool, we partnered with the Indonesian Peatland Restoration Agency, or BRG. Its task is to restore 2 million hectares of degraded peatlands.

With limited resources, the agency must set priorities for peatland restoration. Until now, the agency has determined priority sites based on the number of fire hotspots.

But, with the SMOKE Policy Tool, the agency could redefine its priority sites based instead on minimizing the overall health burden in the Southeast Asia region.

Our tool shows that prioritizing restoration activities along the eastern coast of South Sumatra would lead to the greatest health benefits for all three countries. Of secondary priority is the southern coast of West, Central and South Kalimantan. This is because fires on these peatlands are directly upwind of vulnerable populations.

Setting priority areas to fight fires in Indonesia is important for making the best use of limited resources. Future efforts can also apply the same capabilities to fires in other locations such as the Amazon rainforest.

Tianjia Liu is a Ph.D. candidate in earth and planetary sciences at Harvard University and Miriam Marlier is an associate physical scientist at the RAND Corporation and a faculty member at the Pardee RAND Graduate School.