How the U.S. Withdrawal from Syria Provides a Boost to ISIS 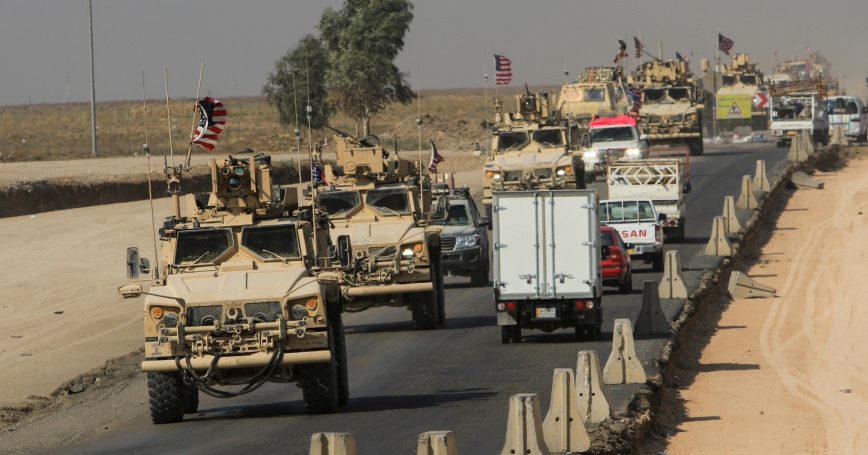 A convoy of U.S. vehicles after withdrawing from northern Syria, on the outskirts of Dohuk, Iraq, October 21, 2019

President Trump's decision to withdraw U.S. troops from Syria could provide the ISIS terrorist group with the time and space to regrow its organization and extend its networks throughout the Middle East.

While the most immediate and visible consequence of the U.S. withdrawal has been an increase of tensions between the United States and Turkey, these and other second-order effects of this decision are less visible and may take a longer time to manifest.

The most obvious concern is that with the Kurds now focused on survival, the United States' most capable partner on the ground in Syria—local militia forces consisting of the Syrian Democratic Forces and the People's Protection Units—will devote fewer resources and manpower to combating ISIS. Kurdish fighters have ceased counterterrorism operations against ISIS.

As the Kurds are pulled away from guarding camps where ISIS prisoners and sympathizers are being detained and called to the front lines to fight against Turkish troops and Turkish-backed militias, detainment camps and prisons will grow significantly more vulnerable, with potentially dire implications for regional stability.

There have already been widespread reports of prison breaks from detainment camps where ISIS prisoners and sympathizers were being held. ISIS, through its official news agency, Amaq, announced a raid on the “PKK headquarters” west of Raqqa, in reference to a detainee camp guarded by Kurdish militants.

Other similar incidents have been reported recently as well, including reports suggesting that more than 700 people with suspected links to ISIS fled from a camp in northeast Syria after shelling by the Turkish military in the area. On Wednesday, the Iraqi government expressed concern that militants who escaped detention in Syria crossed over into Iraq.

Countries in Southeast Asia, including Indonesia, are now apparently on alert as their foreign nationals being held in these camps have escaped and could potentially return to their countries of origin to plot future attacks.

There have also been rumors that several high-profile ISIS fighters from France, including Adrien Guihal, are among those that are now on the loose, heightening concerns back in Paris that plans for impending terrorist attacks could be in the works.

The potential for an ISIS resurgence comes at a critical time for the terrorist group. Although it lost most of the territory it once controlled, the group has been working steadily to spread its influence in Iraq and Syria. The Kurds recently struck a deal with the regime of Syrian leader Bashar Assad, which could help ISIS recruit new members by using this as a propaganda tool.

President Trump's rationale for removing troops from Syria was a desire to “end these endless wars,” but on the heels of this decision came another widely debated move; the president announced he was sending 1,800 troops to Saudi Arabia as a force to deter Iranian expansion.

The move to send these troops to Saudi Arabia might be seized upon by jihadist groups like ISIS and Al Qaeda, the latter of which used the presence of American troops in Saudi Arabia as one of its primary motivations for attacking the United States.

In 1996, Al Qaeda leader Usama bin Laden issued (PDF) his now-infamous “Declaration of Jihad Against the Americans Occupying the Land of the Two Holiest Sites,” in reference to Mecca and Medina, considered sacred places in the Islamic world.

If the cease-fire breaks down and the situation in Syria deteriorates further, ISIS could ultimately rebuild its organization in that country.

If the cease-fire breaks down and the situation in Syria deteriorates further, ISIS could ultimately rebuild its organization in that country. It would seem to be nearly impossible for the United States to redeploy troops into northern Syria, as American bases have been taken over by Russian forces or disassembled by U.S. forces to make them uninhabitable for any forces.

Moreover, even if the United States desired to reinsert troops at any future point to deal with a resurgent ISIS threat, it would likely struggle to find a legitimate partner to work with on the ground.

While the tactical setbacks resulting from the withdrawal of U.S. troops in Syria could reverse hard fought gains in the immediate term, the longer-term strategic effects of such a hastily executed decision could reverberate in the region for years to come, while simultaneously emboldening America's chief adversaries—ISIS, Syria, Russia, and Iran—and accelerating the decline of U.S. influence in the Middle East.

Colin P. Clarke is an adjunct senior political scientist at the nonprofit, nonpartisan RAND Corporation and a senior research fellow at The Soufan Center.

This commentary originally appeared on Fox News Channel on October 20, 2019. Commentary gives RAND researchers a platform to convey insights based on their professional expertise and often on their peer-reviewed research and analysis.