Memories of an Earlier Impeachment 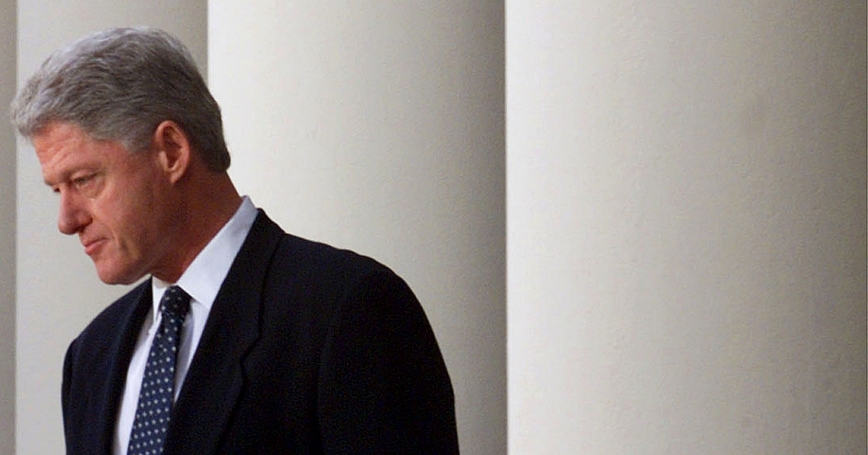 U.S. President Bill Clinton on his way to making a statement regarding the conclusion of his impeachment trial in Washingon, D.C., February 12, 1999

In January of 1998, Pope John Paul traveled to Cuba. Hundreds of American journalists flew to Havana for that week's big story, only to abandon the pope in mid visit, returning to Washington for an even bigger newsbreak: President Bill Clinton's alleged affair with Monica Lewinsky.

Arriving at work that Monday morning, I could look down from my office window at the White House front lawn, swarming with hundreds of camera crews and broadcast reporters. It was teeming rain, the journalists huddled under umbrellas, their cameras planted in ever enlarging mud puddles. I was not the only White House staffer to feel some satisfaction in their discomfort.

From 1996 to 1999, my job was special assistant to the president on the National Security Council staff responsible for relations with Latin America. The Clinton White House, at least after its initial growing pains, was a happy work environment and for most of us remained so throughout this trying period. The president could be impatient and testy with his most immediate staff, but he treated the rest of us as if we were potential donors and he was running for a third term. He remembered names, paid small compliments and, to the great distress of his schedulers, could be engaged in extended conversations not immediately relevant to the business at hand. He was also smart, quick, curious, and indiscreet. All of which made talking with him, or just watching him engage with foreign leaders, enthralling.

Here was a boss who took advice, acted on it effectively, and achieved meaningful results.

By Clinton's second term, lines of authority in the White House were well-established. Sandy Berger, Clinton's national security adviser, was unchallenged in his domain. Relations with the domestic and political side of the White House were collegial. The National Security Council staff were respected for their nonpartisan expertise. Like the rest of the country, we were all surprised and disappointed at successive revelations regarding the president's personal behavior, but the larger effect of impeachment was to create a sense of camaraderie in adversity, as we worked together to see the country through a grave constitutional crisis while carrying on with the nation's business.

Far from distracting the president from his international responsibilities, the mounting scandal seemed to redouble his attention to them. Under moments of greatest pressure, Clinton seemed to take refuge in his inbox. Normally I would get back from him one or two documents a month with some marginal notation indicating that he had read and agreed or disagreed on some point. On only two occasions did I get back multiple memos on the same day. The first such instance was immediately following the weekend on which the Lewinsky revelations broke. The second came some months later, following the weekend when the president was preparing for his grand jury testimony. In both cases, he seems to have sought distraction by churning through and annotating weeks of accumulated staff memos, which if my proportion was any indicator, must have numbered in the hundreds.

I reaped another benefit from this domestic crisis. For the rest of 1998, the president was pretty much precluded from domestic travel and unscripted public appearances, where he would face protests and unwelcome questions. This freed up more time for foreign travel and foreign visitors. Normally an NSC senior director campaigns for months to get a visit to or an Oval Office call for one of his charges. Now the chief of staff's office was calling, asking me to suggest somewhere to visit or someone to host a state dinner.

Latin Americans watched with wonder as revelations led to impeachment and trial by the Senate. That a national leader might have an extramarital affair seemed to them normal, and that he would lie about it if asked even more so. What else could a gentleman do? At the height of the scandal, Clinton was named “man of the year” by Rio de Janeiro. After each new revelation, the president would receive calls from his main hemispheric buddies, Presidents Ernesto Zedillo of Mexico, Fernando Cardozo of Brazil, and Carlos Menem of Argentina. They would each manufacture some other excuse for the calls, but the real message was one of solidarity and encouragement.

The year of Monica ended on Feb. 12, 1999, when the Senate voted against conviction on any of the four charges that the House had laid. Two days later, we flew down to Mexico. The president circulated around Air Force One, greeting staff, clearly elated. We had scheduled him to give a speech from the balcony of the town hall of the city, Merida, where the visit was to take place.

This was nixed by his domestic staff, who felt it would project too triumphalist an image. There were, nevertheless, large enthusiastic crowds in the streets as we drove from the airport. On arrival at the reception hosted by Zedillo, Clinton circulated from group to group, by this point floating a foot or two off the ground. Coming up to a circle of Mexican officials with whom I was chatting, he threw his arm around me and told them what a terrific guy I was, a compliment reflective of the president's mood rather than anything I had done.

The next day, several of us briefed him for an upcoming press conference. Throughout the Lewinsky year these pre-briefs had been carefully orchestrated to separate the foreign from the domestic policy components. We NSC staffers would lead off, and then leave the room before advice was offered on how to handle the domestic—that is, scandal- and impeachment-related—questions. This practice was now abandoned, and after a short discussion of the Mexico-related questions, the discussion turned to other matters, and specifically the rumors that Hillary Clinton might run for the Senate in New York. The president listened without demur while his advisers urged that he deflect this question and then went out to do the exact opposite. “I think she would be terrific in the Senate,” he said. “But it's her decision to make. I will support whatever decision she makes enthusiastically.” His endorsement buried any Mexico-related news.

Such was impeachment season in a well-ordered White House with a popular president. My successors staffing today's National Security Council seem unlikely to be left with similarly positive recollections of their service. Unlike 1998, foreign affairs are at the heart of the current controversy. Bill Clinton's strategy throughout that period was to visibly focus on the nation's business and leave his defense to others. This is not the approach his current successor seems likely to embrace.

James Dobbins is a retired Foreign Service officer and a senior fellow and distinguished chair in diplomacy and security with the nonprofit, nonpartisan RAND Corporation. He is the author of “Foreign Service,” a memoir from which this article is drawn.