A Climate Scientist's Brush with Wildfire 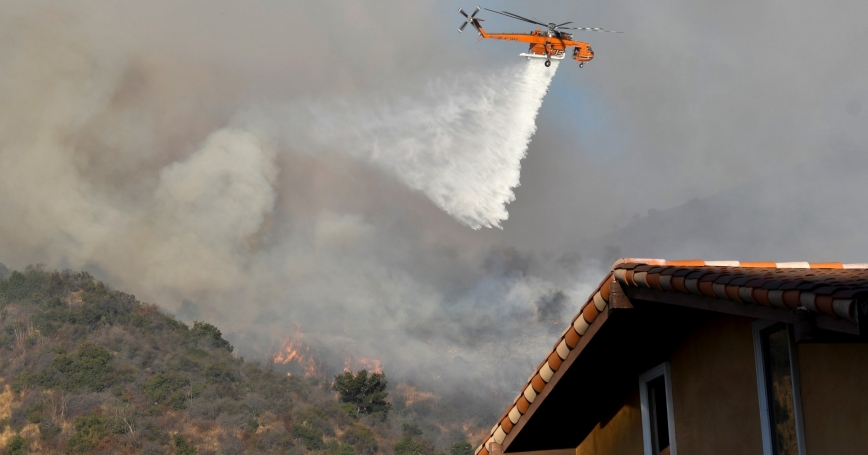 A firefighting helicopter makes a water drop on the Getty Fire as it burns in the hills of West Los Angeles, California, October 28, 2019

My personal and professional lives collided in the middle of the night at the end of October when my neighbor pounded on our front door.

Had we received the warnings of the growing Getty fire? We hadn't. Our neighbor shouted that mandatory evacuations had been issued for much of our Pacific Palisades community in Los Angeles.

I study climate change risk management for a living, helping organizations from local cities to the United Nations understand how best to prepare for the impacts of climate change.

Our 3 a.m. warning was a visceral reminder of the challenge of preparing for climate change.

We had taken many steps to protect ourselves and our home. Amidst the fear and confusion over the next few days, we wondered whether our half-completed preparations would be enough.

The experience emphasized the challenges of adapting to climate change, not merely because it is hard, but because it makes the familiar become unfamiliar in unexpected ways.

Over the last year, our neighborhood has tried to become more resilient to the increasingly severe wildfire hazard. Our community is well organized and we have lots of good information to go on.

Our 3 a.m. warning was a visceral reminder of the challenge of preparing for climate change.

One of our neighbors received a grant to run a three-day training program taught by a world-renowned fire safety expert for community members and local firefighters. I had two newly trained friends from the program independently walk our property. Comparing their suggestions, I made a list of high priority steps that could reduce the fire danger to our house.

The basic message is simple. Once you've established a 100-foot barrier between your home and the brush, houses mostly burn because of blowing embers. Think of your house like the big log in a campfire. The wind blows a shower of lit matches. But the matches only ignite the log if there is kindling.

You'll likely be evacuated for several days and firefighters may be overwhelmed. So any kindling around your house may smolder for days. That's why you need to eliminate all kindling far closer than your brush barrier, to within 5 feet of your house.

Yet putting this advice into practice is hard. It requires most people to work well outside the scope of their experience, even someone like me, who is well-versed in adaptation and resiliency science.

One of the most vulnerable parts of our house is our wood deck which extends out over the hill where we can get even more beautiful views of the Santa Monica Mountains. It's our favorite place, and where we spend much of our time during summer.

We developed a plan to protect our deck and hired our contractor to implement it. But watching him implement it by hanging fine wire mesh to prevent blowing embers from lodging under the deck left me uneasy.

When we renovated our bathroom, I knew our contractor had seen hundreds of such jobs. He knew all the ways bathrooms could go wrong and how to make sure they don't. But he had never previously installed wire mesh to thwart wind-blown embers from igniting a wood deck.

Did he inadvertently create crevices that would trap embers? Did he allow for sufficient drainage? Was a wire mesh really the most risk-reducing investment compared to the other things we might have asked him to do?

I couldn't help but recall the story of one of our neighbors who had installed and extensively tested an expensive sprinkler system to douse any embers that might lodge on his house. A visiting firefighter with vast experience deflated our neighbor's confidence by asking whether the sprinklers had ever been tested in 70 mile-per-hour, fire-storm driven winds to see where the water would go?

As California and our nation head into uncharted territory due to climate change, all of us—not just climate experts—will need to learn how to adjust in response to changing risks. We will all need to become more adaptive by acting, learning, and responding. We will all need to share information about what works and what doesn't.

Cities and states will need to help contractors to learn how to implement protections against fire (and flood, heat, drought, and storms) without waiting a lifetime to learn from the experience of their mentors.

As I write, the hills around my house have returned to their long-standing, unfailingly spectacular, golden hue. But to survive our changing climate, we will need to understand that even what looks familiar no longer is.

Robert Lempert is a principal researcher at the nonprofit, nonpartisan RAND Corporation and director of the RAND Pardee Center for Longer-Range Global Policy and the Future Human Condition.

This commentary originally appeared on CalMatters on December 18, 2019. Commentary gives RAND researchers a platform to convey insights based on their professional expertise and often on their peer-reviewed research and analysis.