Los Angeles River Revitalization: Taking Inspiration from Near and Far 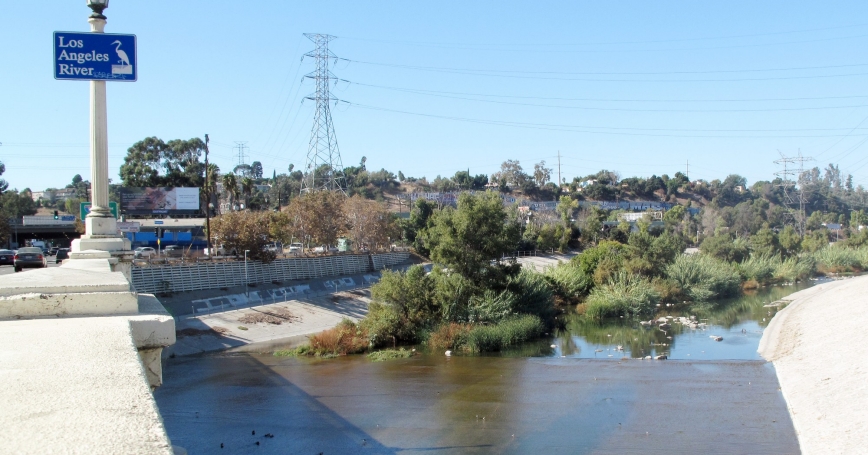 Currently a predominantly concrete channel running through the city, the Los Angeles River has great potential to revitalize Los Angeles's water resources, landscape, and identity. Creating a new vision for a river that stretches through 33 cities and for 50 miles from a mountainous upper watershed to a flat coastal zone presents a complex challenge for policymakers, engineers, and urban planners.

The length of the LA River itself can both help and hinder revitalization plans. On one hand, it touches more people and communities who could support and benefit from a revitalized river. On the other, it also means that there are many potential stakeholders with varying needs and goals. A major challenge for planning is to come up with a unified and comprehensive plan. Different organizations have offered possible answers for the river's future at different scales. Some, such as the County's Los Angeles River Master Plan or the City's Los Angeles River Revitalization Master Plan, are large-scale. Others, such as the Department of Water and Power's “One Water LA” or the LA River Ecosystem Restoration Plan, are more focused on a particular topic or area.

The substance of these plans differs as well. For example, the LA River Downtown Design Dialogue seeks to foster interactions between human and natural systems in a bustling oasis. The LA Sustainable Water Project seeks to use the river to enhance local water supply and improve water quality. Friends of the Los Angeles River advocate for habitat restoration and public access. Still other plans are focused on different stretches of the river, rather than treating it as a whole, highlighting the need for a coordinated master plan that integrates planning across both upstream and downstream segments of the river.

Los Angeles is not the only place to grapple with these complex issues. Internationally, Los Angeles can learn from Seoul's experience in revitalizing the Cheonggyecheon River. The river, once a major waterway for the city, was heavily polluted in the 1950s and paved over as a freeway in 1976. In 2001, a new mayor launched an effort to remove the freeway and restore the river as an economic and environmental centerpiece. In less than four years, many fish, bird, insect species returned. Other benefits included substantial reductions in air pollution and reduced summer temperatures near the river. Approximately 90,000 people now visit the river every day. Riverside business and homeowners have seen substantial improvements in their quality of life, and the river has become a celebrated part of the city identity.

Closer to home, the Napa River restoration project could also serve as model. The 55-mile Napa River, once flowing across a wide swath of valley floor, was built (PDF) with levees and berms and confined to a much narrower channel. This addressed flooding, but floodplains and wildlife habitat receded, and the fish population declined. Floodplain restoration efforts launched in the 1990s have helped Napa County restore 15 miles of the Napa River and add 135 acres of floodplains, making it California's largest floodplain and wildlife habitat restoration project. Funded by federal and state grants and supported by vineyard owners, the restoration serves as a model for joint public and private efforts, and for Los Angeles in creating a new river ecosystem that brings wildlife back and people together.

Transferring the lessons learned from international and local good practices requires financial and intellectual support to turn vision into reality. First, efforts to revitalize the Los Angeles River could draw from several funding sources. Measure W created a parcel tax for property owners that pays for programs to capture, treat, and recycle stormwater, raising an estimated $300 million per year for this purpose in Los Angeles County. Measure M generated a sales tax measure to fund the expansion of rail, rapid bus, and bike networks to ease traffic congestion and transform the transportation system, recently funding $356 million for a central path along the Los Angeles River.

Efforts to restore the Los Angeles River should embrace complexity and diversity.

Efforts to restore the Los Angeles River should embrace complexity and diversity, leveraging and building on existing regional and local plans and incorporating diverse funding sources as part of a continued path for success. Revitalization efforts can also draw from the experiences and lessons learned from other regions. To promote financially, environmentally, and socially sustainable development, engineers, policymakers, urban planners and other key stakeholders will need to continue to work together in creating a ground-breaking vision and implementation plan that pumps life into this central vein of the city.