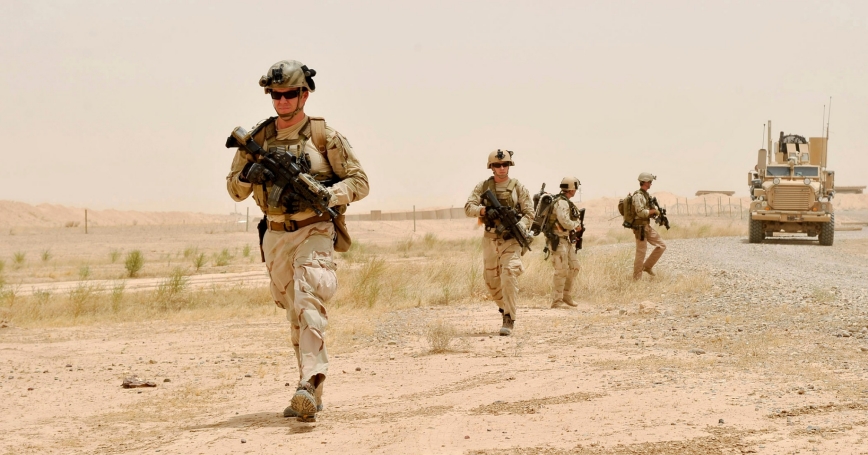 U.S. Navy sailors during training to locate, identify, render safe, and dispose of an IED, near Tikrit, Iraq, July 12, 2010

by Ben Connable and James Dobbins

To a great extent, Iraqis' collective futures—including Arabs, Kurds, and all of Iraq's minority populations—hinge on the way these questions are answered.

The American military has four possible options for withdrawing its approximately 5,000 advisers, trainers, and logistics personnel currently in Iraq: No withdrawal; a limited withdrawal of forward-positioned combat advisers only, leaving U.S. trainers; full withdrawal of all advisers and trainers; and lastly. full economic as well as military disengagement from Iraq.

Our analysis showed high risk to the ongoing counter-Islamic State fight even with a limited withdrawal, and very high risk of failure if the United States fully withdraws. Any withdrawal would undermine U.S. efforts to counterbalance Iranian influence in Iraq. We also describe lesser risks to the ability to compete with China and Russia; to American and Iraqi economic prosperity; and to the broader region-wide military force posture of the United States.

We recommended option 1, no immediate military withdrawal, but with a gradual move toward a smaller residual training presence as Iraq forces become fully able to deal with the residual Islamic State threat. The United States should continue to support Iraqi democracy; help Iraq develop its security forces, governance, and economy; and work towards integrating Iraq into regional alliances and counterterror coalitions.

While these policies of direct support to Iraq have been largely consistent across five presidential terms, they must now compete with other priorities. Competition with China and Russia have come to dominate policy discussions, investments, and actions in Washington. Frustration with the slow progress in Iraq and continued conflict in Syria have generally soured American policymakers and military leaders on the Middle East.

Public perceptions are more mercurial: One recent poll shows surprising public support for an enduring military presence in the Middle East. Despite mixed views from the public, when the Department of Defense issued the 2018 National Defense Strategy, the gradual shift towards great power competition with China and Russia accelerated into a full pivot.

American policymakers and military leaders often perceive themselves as torn between full-time irregular warfare in the Middle East and great power competition in Asia and Europe.

Two false dichotomies are revealed in this perception. First, great power competition is not divided along regional lines. Great power adversaries have long competed in the Middle East, Africa, and South Asia, not just in East Asia and Europe. China and Russia have accelerated their investments across the Middle East and specifically in Iraq. Russia seeks to dominate Iraqi arms purchases in order to increase its revenues and its national influence in Iraq. China depends on a steady supply of Iraqi Basra Light Crude oil, and Chinese leaders view Iraq as part of the Belt and Road Initiative. The Belt and Road Initiative is China's key foreign policy initiative to secure its economic growth and improve its global presence, though some experts view it as a strategy for competitive global (PDF) economic rebalancing at the expense of South Asian and Western states, or even a plan for economic domination. American withdrawal from Iraq leaves open opportunities for China and Russia and could place at risk other U.S. interests in the Middle East and around the world.

Secondly, great power competition is not entirely divorced from irregular warfare. Activities in Iraq like counterterrorism, counterinsurgency, and advising are essential to both defeating the Islamic State and for competing regionally with China and Russia by helping to keep Iraq's democracy on track.

As much as members of the policy collective in Washington might wish to escape the Middle East, and particularly Iraq, it has so far proven difficult. President Trump has actually been forced by circumstance to increase military presence in the Middle East rather than draw down. While competition with China and Russia are the greater challenges the United States faces, Iran remains the more immediate threat. As the United States ponders its future in Iraq, and as Russia and China compete for regional influence, Iran presses forward with its efforts to control Iraq's government and security services, to pervert its democracy, and to spread its own radical agenda through Iraq into the greater Middle East.

For these many reasons—the risks to the counter-Islamic State fight; the potential gains for Iran and its designated terrorist group proxies; the great power competition for regional influence and the present danger to Iraq's fledgling democracy—maintaining a small but capable force focused on training and material support is in the best interests of the United States and Iraq, and may be critical to the pursuit of a safer and more just world.

Ben Connable is a senior political scientist and James Dobbins is a senior fellow at the RAND Corporation.

This commentary originally appeared on Rudaw on June 4, 2020. Commentary gives RAND researchers a platform to convey insights based on their professional expertise and often on their peer-reviewed research and analysis.