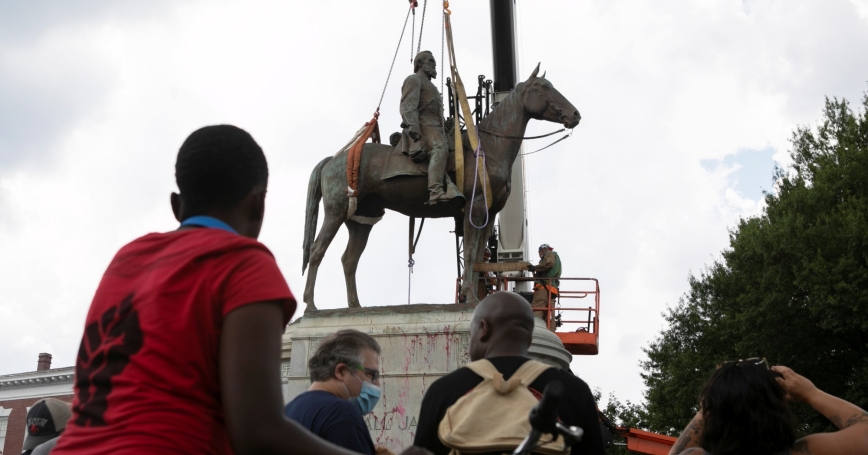 On a cold day in early December 1991, I came across an unusual scene in Vilnius, Lithuania. A crowd had gathered to watch a crane unceremoniously pull a statue of a Soviet-era hero off its pedestal and send it off—I assume—as scrap metal.

The crowd was quiet. But there was a distinct feeling in the air that we were witnessing something important. Just a few years earlier, an attempt to vandalize the statue would have brought on a severe prison sentence to the perpetrator. But now the unraveling of the USSR was in full swing, Lithuania had declared independence, and the removal of the statue in Vilnius was one small but clear sign of the end of Soviet occupation of Lithuania and the impending collapse of the Soviet communist regime.

The renewed debate in the United States about monuments to historical figures associated with the Confederacy is part of the larger debate about the role of racism in this country and the treatment of African Americans by institutions of public order and the justice system.

The removal of Confederate statues in and around the North Carolina state Capitol—both by protesters and by order of Gov. Roy Cooper—is just one example of the national reexamination of public monuments. Challenging the visible symbols of the Confederacy in public places is about questioning why in some places in this country we continue to celebrate and revere the leaders of the Confederate cause.

Monuments are both public art and symbols important to those who hold political and economic power. Statues of a general on a horse, leading the troops, are meant to inspire pride in the national cause the general represents. Statues of statesmen often portray them as larger-than-life figures, staring off into the distance, proudly leading the way. These representations symbolize the feats and accomplishments of historical figures and their role in building the nation. Because of what monuments and statues represent, they become focal points for challenges to the established power structure.

One thing to remember amid the current debate is that challenges to the presence of statues and monuments are not rare events. Monuments come under scrutiny during times of political and social transformation. And the practice is hardly new, dating back to at least the Roman Empire.

But usually, the toppling of statues associated with the previous regime accompanies and heralds the change, whether it's the toppling of Vladimir Lenin statues in post-communist states or the vandalism of Afrikaner heroes in post-apartheid South Africa. The difference with monuments to Confederate generals and statesmen is that many of those statues went up in late 19th and early 20th centuries, as part of a retrenchment and the attempt to restore some of the pre-Civil War social order in the states of the Confederacy.

The losing side gradually put up statues to the figures representing the cause that lost the Civil War as a way of symbolizing that the social order remained in line with the ideology of the Confederacy.

In other words, the losing side gradually put up statues to the figures representing the cause that lost the Civil War as a way of symbolizing that the social order remained in line with the ideology of the Confederacy. The placing of the monuments accompanied the curtailment of rights of African Americans through Jim Crow laws and segregation. Nothing symbolizes better the continued inferior social status of African Americans in the United States than a statue of a wise-looking Jefferson Davis or a thoughtfully posed Robert E. Lee in a public square of an American city.

Some may argue that statues to political leaders of the Confederacy may be difficult to justify but that statues of Confederate generals like Lee, Stonewall Jackson, or Jeb Stuart celebrate the far-reaching military skills they demonstrated, thus they are celebrated for their contributions to the U.S. military profession and so the presence of such statues, especially at U.S. military bases, is justified.

The argument is invalid, because the Confederate generals demonstrated their military skills for a cause—the retention of slavery—that was immoral and widely seen as such already in the mid-19th century. As an analogy, German generals in World War II, such as Erich von Manstein, Heinz Guderian, and Erwin Rommel, demonstrated impressive military skills but they fought for an odious cause and there are no monuments to them in Germany today. Military historians can argue about the tactical skills of Rommel or Jackson, and military officers can learn from the battlefield maneuvers that Rommel or Jackson conducted, but neither one deserves a monument in a public space.

Retaining of monuments of figures who fought to keep African Americans subjugated is divisive and impedes progress in race relations.

Other countries have dealt with these issues and emerged for the better. Germany offers an example. The post-unification removal of statues of Lenin or monuments glorifying border guards in East Germany was straightforward. But what about the statues put up in East Germany during the communist era celebrating victims of Nazism while also glorifying the communist regime?

Recognizing this ambiguity, Berlin set up a commission in the early 1990s to examine which monuments should remain and which should be removed. Forming such a commission would be useful as part of a national discussion on symbols of racism in public spaces in contemporary United States.

The more recent debate about U.S. Army bases named for Confederate generals is also part of the same debate. As retired Gen. Ben Hodges suggested, the Army might learn from the Navy in this case, as the Navy names its bases for locations rather than for individuals.

The debate over monuments in public places and names of military installations is about the symbolic meaning of those monuments and names. It is part of the politics of memory and representation and the continued vestiges of racism and discrimination that target African Americans. It may be time to take the symbolism seriously and understand how those symbols play out in everyday life to an African American soldier who leaves the Pentagon to go to Fort Lee, first crossing the Jefferson Davis Highway.