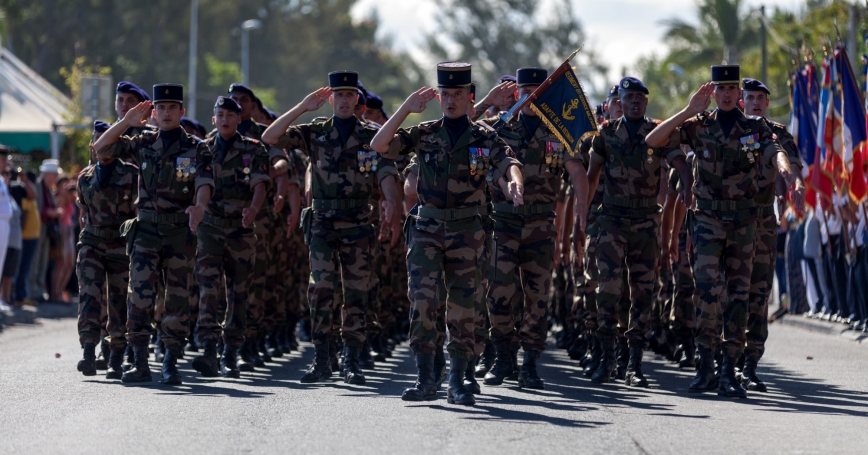 Battalion of French soldiers of the RSMA marching during a monthly ceremony rewarding the young soldiers in Saint-Paul, LaRéunion, June 28 2017

Gen. André Beaufre (1902–1975), the father of contemporary French strategic thought and required reading at French military schools, epitomizes better than anyone two traits that make modern French military theory unusually rich. The first is failure. Beaufre had a hand in 20th-century France's greatest military catastrophes, the trauma of which spurred his generation to think—hard—about modern conflict. The second is an intellectual tradition that goes back more than two centuries and has been dominated by highly analytical and literate generals “sick with rationality,” to cite Gen. Lucien Poirier (1918–2013), another of France's great warrior-philosophers from Beaufre's generation. Beaufre's thinking is Cartesian: He began by challenging the most fundamental premises and then, step by step, logically built out complex intellectual structures with the rigor of a geometrician. Bernard Brodie, the eminent RAND political scientist who in the 1950s and 1960s was one of the architects of American nuclear strategy and no intellectual lightweight, went so far as to complain in a review of Beaufre's books of the French general's insistence on riding an “intellectual high horse.” Brodie clearly knew French but apparently not the French, and the self-described “pragmatist” of the American school understandably was at once deeply impressed and put off by Beaufre's foreign method. For less particular Americans, Beaufre is a marvel of lucidity. He is also a key for accessing a rich and distinctly different way of thinking about war with direct applications for today, whether one is pondering Afghanistan or how to deal with China.

There is a single thread that runs through Beaufre's half-dozen books about strategy, which he wrote in the years between his retirement from the French army in 1961 and his death. That thread is a desire to understand the nature of war in the modern nuclear era, and to use that insight to resurrect strategy and elaborate a strategic method appropriate for great powers today. Beaufre of course was not alone. On this side of the Atlantic, men like Brodie and Herman Kahn did brilliant work on the subjects of nuclear strategy and deterrence. Beaufre was fluent in English and well versed in the Americans' thinking. On the French side, Beaufre shared the space with Raymond Aron and three other generals (Charles Ailleret, Pierre Marie Gallois, and Poirier) who, together with Beaufre, are considered the architects of French nuclear strategy and referred to as “the Four Generals of the Apocalypse.…”

This commentary originally appeared on War on the Rocks on October 8, 2020. Commentary gives RAND researchers a platform to convey insights based on their professional expertise and often on their peer-reviewed research and analysis.