Vietnam Is Losing Its Best Friends to China 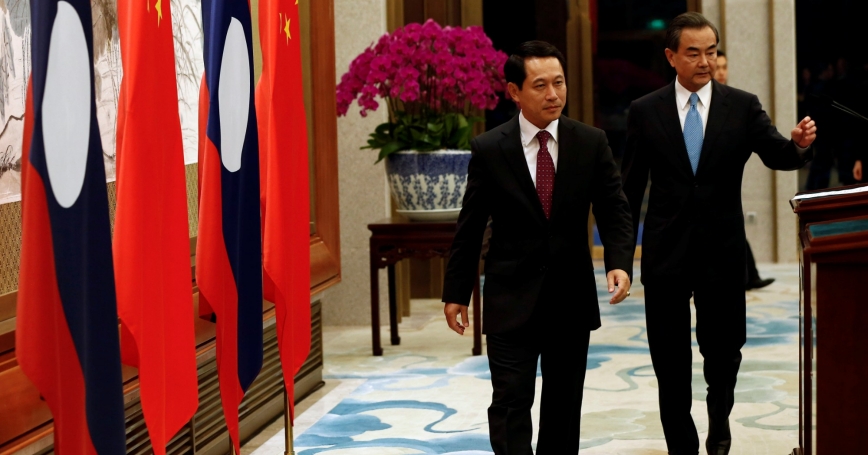 Strategic partnerships, which exist with nations like Australia and Japan, are more numerous and indicate that Vietnam and the partner share long-term strategic interests. Comprehensive partnerships are even more common and include countries that do not necessarily (but may) share a mutual long-term strategic interest. The United States is a prominent comprehensive partner that actually operates at the strategic level as the two nations cooperate to push back against China—a friend of Vietnam but also an adversary in some areas, especially the South China Sea.

Either way, much of the ink spilled on Vietnam's foreign partnerships focuses on this hierarchy of partnerships. However, much less discussed or well understood are Hanoi's “special strategic partnerships” with neighboring states Cambodia and Laos. These partnerships of “special solidarity” date back to the Vietnam War, during which both countries provided critical logistical support and safe haven to Vietnamese communist forces along the Ho Chi Minh Trail, contributing to the defeat of the U.S. military. Hanoi has never forgotten about the enormous sacrifices of its Indochinese brethren (the Ho Chi Minh Trail is the most bombed place on Earth) and holds them in greatest esteem, above all other partners.

For decades, Hanoi's special strategic partnerships went uninterrupted. But in recent years, China has increasingly challenged Vietnam's dominance in Cambodia and Laos, primarily by leveraging Belt and Road Initiative (BRI) projects to raise its influence in the region. Outspent by BRI, Hanoi is almost certainly concerned that it can no longer count on Cambodia and Laos to make decisions aligned with its national security. China's strengthening ties to Cambodia and Laos in recent years have real effects on Vietnam. For example, Chinese support has likely contributed to Cambodian and Laotian decisions not to fully support Vietnam's stance on ASEAN's Code of Conduct negotiations in the South China Sea.

China's strengthening ties to Cambodia and Laos in recent years have real effects on Vietnam.

Regarding Cambodia, there are many troubling signs. Cambodian Prime Minister Hun Sen, who has ruled for 35 years, was supported by Vietnam from the late 1970s when he was part of the rebel army that helped overthrow the China-backed Khmer Rouge. He also enjoyed robust support from Hanoi through the 1980s, when Hun Sen's government was embargoed by China, the United States, and their partners in ASEAN. In recent years, however, the wheel has turned, and Hun Sen become a good friend of Chinese President Xi Jinping. Underscoring the closeness of their relationship, Hun Sen became the first foreign leader to visit Xi in China amid the coronavirus pandemic. He referred to Cambodia and China as “steadfast friends.” Hun Sen has taken his loyalty to China a step further by echoing Beijing's revisionist history on Chinese support for the Khmer Rouge. He now omits any talk of Chinese transgressions, which must be particularly galling to Vietnam; Hanoi clearly no longer has its man in Cambodia.

Moreover, in mid-October, Hun Sen's regime welcomed Chinese Foreign Minister Wang Yi and the two sides inked a new free trade agreement, which was negotiated in less than a year. China is already Cambodia's largest aid donor and investor as well as its top trade partner. Cambodia is also an active participant in BRI to the tune of at least $5.3 billion, and Phnom Penh is benefiting in the form of infrastructure projects including roads, bridges, airports, railways, hydropower dams, and special economic zones (SEZs). In other areas of the world, such as Sri Lanka, Beijing has leveraged BRI projects for geopolitical gain once the recipient country realizes it cannot afford the program. Hun Sen dismisses these concerns for Cambodia even though some observers believe Phnom Penh has already relinquished some of its sovereignty due to BRI deals, especially within Chinese-owned SEZs.

Although Hun Sen has denied reports that China is planning to build a naval and air base at Ream and Dara Sakor, respectively, Beijing is clearly involved in financing infrastructure construction at these locations, which may give it preferential access to them in the future. Further fueling speculation, Cambodia in September bulldozed U.S. facilities at Ream without notifying Washington, strongly suggesting that Phnom Penh attempted to do it secretly. Commercial imagery indicates that runways at Dara Sakor can accommodate Chinese military aircraft. To add to Vietnamese concerns, China and Cambodia have continued holding joint military exercises in spite of the pandemic, highlighting the importance each side attaches to these engagements. If Beijing were to obtain any level of access to Ream or Dara Sakor along the Gulf of Thailand, or, in a worst-case scenario, Beijing suddenly owned and operated the bases, this would severely threaten Vietnam's western flank. Coupled with Beijing's growing assertiveness in the South China Sea, Hanoi would increasingly feel the pressure of geostrategic encirclement.

Regarding Vietnam's other Indochinese neighbor, Laos, the situation is not trending well either. In addition to visiting Cambodia last month, Wang also made a stop in Laos to tout bilateral cooperation on pandemic relief and BRI. On the latter point, Laos finds itself in enormous debt to China. Vientiane is clearly unable to afford the massive BRI infrastructure projects in Laos, which includes the construction of a high-speed railway stretching from China's Yunnan province to the capital Vientiane, as well as hydropower dams along the Mekong River.

In lieu of having the requisite funds to repay loans on BRI projects, Laos appears willing to offer up other valuable assets to its largest creditor. For example, in mid-September, a Chinese state-owned firm assumed majority control of Laos' electrical grid. There are even concerns that Vientiane is willing to pay down Chinese debts using land transfers. Like in Cambodia, Laos is actively engaged in SEZ activities with China. Chinese firms have already been developing a resort area at Boten SEZ in northern Laos along the Chinese border, and many other SEZs exist or are coming online soon. Typically, SEZs grant China multi-decade leases to develop the land. In the case of Boten, Laos agreed to a 90-year land-lease deal with China. Also like in Cambodia, such agreements give the impression that Laos is becoming, or is already, a semi-colony of China.

Finally, Chinese-financed hydropower dam construction in Laos via BRI—to ultimately transform it into “The Battery of Southeast Asia”—is of particular concern to Vietnam. These dams restrict the flow of water to the Mekong Delta, which has caused difficulties in rice paddy cultivation in the breadbasket of Vietnam, impacting millions of people and risking their starvation and livelihoods. Reductions in fish and sediment further exacerbates the environmental challenges. Chinese dams in Cambodia, though not as numerous, are similarly of great concern to Hanoi.

The wide range of Chinese activities with Vietnam's traditional “special strategic partners” must be jarring for Vietnamese leaders.

The wide range of Chinese activities with Vietnam's traditional “special strategic partners” must be jarring for Vietnamese leaders. Although less public, Vietnam's own interactions with Cambodia and Laos continue to be exceptionally close in spite of China's growing influence in the region. But the reality is that China has already eclipsed Vietnam in Indochina, and that fact means that Hanoi's angst will only continue to rise in its own backyard. Hanoi will likely have to find alternative means of engaging Cambodia and Laos to combat Chinese influence in this critical region in the years to come.

This commentary originally appeared on The Diplomat on November 2, 2020. Commentary gives RAND researchers a platform to convey insights based on their professional expertise and often on their peer-reviewed research and analysis.